THIS WEEK'S BEST BET
"The Man in Search of His Murderer" (1931) Prior to emigrating to the U.S., where he would make such classics as "The Spiral Staircase" and "The Killers," Robert Siodmak took a familiar black comedy premise and transformed it into a diabolical thriller. Heinz RÃ¼hmann, employing his trademark persona of the childlike naÃ¯f, portrays Hans, a despondent young man who decides to murder himself by hiring a burglar to commit the crime. But when Hansâs life takes an unexpected turn for the better, he realizes he must locate and stop the killer before the contract can be fulfilled. 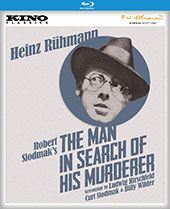 Combining morbid comedy with broad slapstick, "The Man in Search of His Murderer" owes much of its comic sensibilities to screenwriters Billy Wilder and Curt Siodmak who were also soon to leave Germany, to later enjoy fruitful careers in Hollywood. On Blu-ray from Kino Classics.

In "The Grounds" (2018), starring Michael Welch, Trevor Morgan and Ashley Hinshaw, alcoholic Calvin cons his way into a job tending the grounds of a hillside mansion owned by the reclusive Jack. On the night Calvin stumbles into a bathroom to see Jack with a gun to his head, an unlikely friendship is born. From Indican Pictures ... In "Barb & Star Go to Vista Del Mar" (2021), starring Kristen Wiig, Annie Mumolo, Jamie Dornan and Damon Wayans Jr., lifelong friends Barb and Star embark on the adventure of a lifetime when they decide to leave their small Midwestern town for the first time ever to go on vacation in Vista Del Mar, Florida. There's romance, friendship, and a villain's evil plot -- hold onto your culottes! On DVD, Blu-ray, from Lionsgate ... In "Doors" (2021), starring Wilson Bethel, Lina Esco and Josh Peck, without warning millions of mysterious alien "doors" suddenly appear around the globe. 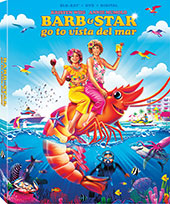 In a rush to determine the reason for their arrival, mankind must work together to understand the purpose of these cosmic anomalies. Bizarre incidents occurring around the sentient doors leads humanity to question their own existence and an altered reality as they attempt to enter them. In a rush to determine the reason for the arrival of these cosmic anomalies, the government enlists volunteers to brave the journey to enter the doors: a ragtag band of high school students discover a door for the first time, volunteers explore the parallel reality beyond the threshold, and a lonesome hermit manages the seemingly impossible: establishing communication with a door. On DVD, Blu-ray, from Epic Pictures. Read more here. ... In "Son of the South" (2020), starring Julia Ormond, Lucy Hale and Lucas Till, a grandson of a Klansman comes of age in the deep south and eventually joins the Civil Rights Movement. Based on Bob Zellner's autobiography "The Wrong Side of Murder Creek." On DVD, Blu-ray, from Lionsgte ... In "The Reckoning" (2020), starring Charlotte Kirk, Joe Anderson, Steven Waddington and Sean Pertwee, after losing her husband during the Great Plague, Grace Haverstock (Kirk) is unjustly accused of being a witch and placed in the custody of England's most ruthless witch-hunter, Judge Moorcroft (Pertwee). Forced to endure physical and emotional torture while steadfastly maintaining her innocence, Grace must face her own inner demons as the Devil himself starts to work his way into her mind. On DVD, Blu-ray, from RLJE Films ... = 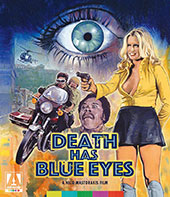 "Death Has Blue Eyes" (1976 -- Greece) is a gripping paranormal action thriller with shades of giallo from the director of the cult classic video nasty "Island of Death" (1976). When local gigolo Chess (Chris Nomikos) greets his vacationing friend Bob Kovalski (Peter Winter) at Athens airport, the pair embark on a string of scams and erotic dalliances that eventually lead them into contact with an elegant wealthy woman, Geraldine Steinwetz (Jessica Dublin), and her glamorous daughter Christine (Maria Aliferi). Geraldine blackmails the two cheeky bachelor boys into acting as bodyguards for Christine, whom it transpires has telepathic abilities and has had her eye on them for some time. After fleeing from a series of assassination attempts, it soon becomes clear that Geraldine herself might not be quite whom she seems, as the two young men find themselves caught up in a political conspiracy of international dimensions. In his debut feature, maverick filmmaker Nico Mastorakis presents us with a generous meze of non-stop car, bike and helicopter chases, a bevy of beautiful girls with guns, sensational softcore sex scenes, psychic thrills and Cold War political intrigue set against the picturesque landscapes of 70s Greece, all presented for the very first time in a new HD master in both widescreen and full-frame versions, from the original camera negative approved by the director. Two versions of the film: the widescreen 1.85:1 version and the full-frame 1.33:1 version. On Blu-ray from Arrow Video/MVD Entertainment ... In the throes of World War II, Captain Maude Garrett (Chloe Grace Moretz) joins the all-male crew of a B-17 bomber with a top-secret package in "Shadow in the Cloud" (2020). Caught off guard by the presence of a woman on a military flight, the crew tests Maude's every move. Just as her quick wit is winning them over, strange happenings and holes in her backstory incite paranoia surrounding her true mission. Something sinister is tearing at the heart of the plane and, trapped between an oncoming air ambush and an evil lurking within, Maude must push beyond her limits to save the hapless crew and protect her mysterious cargo. Co-stars Nick Robinson, Beulah Koale, Taylor John Smith. On DVD, Blu-ray, from Vertical Entertainment.

"Preparations to be Together for an Unknown Period of Time" (2020 -- Hungary), starring Natasa Stork, Viktor Bodo, Benett Vilmanyi, Zsolt Nagy, Andor Lukats and Peter Toth, is a hauntingly provocative psychological thriller that is Hungaryâs official entry for Best International Feature Film at the Academy Awards. MÃ¡rta, a 40-year-old neurosurgeon, falls in love. She leaves her shining American career behind and returns to Budapest to start a new life with the man she loves. But she waits for him at the Liberty Bridge in vain -- he does not appear at their rendezvous. MÃ¡rta starts to search for him desperately, but when she finally finds him, the love of her life claims that they have never met before. From Greenwich Entertainment ... Acclaimed actresses Monique van de Ven ("Turkish Delight") and Maria Schneider ("Last Tango In Paris") star alongside Peter Faber ("Soldier of Orange") in the groundbreaking film "A Woman Like Eve" (1979 -- Netherlands), which focuses on a married woman's affair with another woman. Directed by pioneering filmmaker Nouchka van Brakel, this acclaimed film was a major hit at LGBT film festivals and was the Dutch entry for Best Foreign Language Film at the Academy Awards. Presented for the first time on Blu-ray in North America in a newly restored high-definition transfer. On DVD, Blu-ray, from Cult Epics. 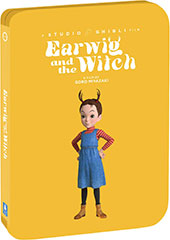 featuring Richard E. Grant, Kacey Musgraves, Dan Stevens and Taylor Paige Henderson, is the first new release in four years from the legendary Studio Ghibli. Growing up in an orphanage in the British countryside, Earwig has no idea that her mother had magical powers. Her life changes dramatically when a strange couple takes her in, and she is forced to live with a selfish witch. As the headstrong young girl sets out to uncover the secrets of her new guardians, she discovers a world of spells and potions, and a mysterious song that may be the key to finding the family she has always wanted. On DVD, Blu-ray/DVD Combo, from GKIDS/Shout! Factory.