FROM THE BIG SCREEN:
"Love and Monsters": Seven years after the Monsterpocalypse, in which monsters have taken over the world, Joel (Dylan O'Brien) and the rest of humanity are forced to live underground. Believing he's lost everyone he has ever loved, Joel finds his high school sweetheart Aimee (Jessica Henwick) living just 80 miles away. Facing unknown dangers that stand in his way, 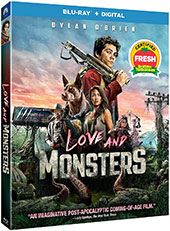 Joel must discover his inner hero as he makes the impossible journey across a monster-infested land to be with the girl of his dreams. Love and Monsters

": More than four decades after he took a razorblade to an eyeball and shocked the world with "Un chien andalou," arch-iconoclast Luis BuÃ±uel capped his astonishing career with three final provocations -- "The Discreet Charm of the Bourgeoisie," "The Phantom of Liberty" and "That Obscure Object of Desire" -- in which his renegade, free-associating surrealism reached its audacious, self-detonating endgame. Working with such key collaborators as screenwriter Jean-Claude CarriÃ¨re and his own frequent on-screen alter ego Fernando Rey, BuÃ±uel laced his scathing attacks on religion, class pretension, and moral hypocrisy with savage violence to create a trio of subversive, brutally funny masterpieces that explore the absurd randomness of existence. Among the directorâs most radical works as well as some of his greatest 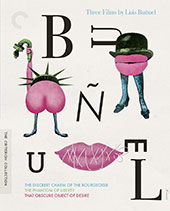 international triumphs, these films cemented his legacy as cinemaâs most incendiary revolutionary. THE DISCREET CHARM OF THE BOURGEOISIE (1972): BuÃ±uelâs deliciously satiric masterpiece, an upper-class sextet sits down to a dinner that is continually delayed, their attempts to eat thwarted by vaudevillian events both actual and imagined, including terrorist attacks, military maneuvers, and ghostly apparitions. Stringing together a discontinuous, digressive series of absurdist set pieces, BuÃ±uel and his screenwriting partner Jean-Claude CarriÃ¨re send a cast of European-film greats -- including Fernando Rey, StÃ©phane Audran, Delphine Seyrig, and Jean-Pierre Cassel -- through a maze of desire deferred, frustrated, and interrupted. THE PHANTOM OF LIBERTY (1974): BuÃ±uelâs vision of the inherent absurdity of human social rituals reaches its taboo-annihilating extreme in what may be his most morally subversive and formally audacious work. Zigzagging across time and space, from the Napoleonic era to the present day, "The Phantom of Liberty" unfolds as a picaresque, its main character traveling between tableaux in a series of Dadaist non sequiturs. Unbound by the laws of narrative logic, BuÃ±uel lets his surrealistâs id run riot in an exuberant revolt against bourgeois rationality that seems telegraphed directly from his unconscious to the screen. THAT OBSCURE OBJECT OF DESIRE (1977): BuÃ±uelâs final film brings full circle the directorâs lifelong preoccupation with the darker side of desire. BuÃ±uel regular Fernando Rey plays Mathieu, an urbane widower, tortured by his lust for the elusive Conchita. With subversive flair, BuÃ±uel uses two different actors in the latter role -- Carole Bouquet, a sophisticated French beauty, and Ãngela Molina, a Spanish coquette. Drawn from the surrealist favorite Pierre LouÃ¿sâs classic erotic novel "La femme et le pantin (The Woman and the Puppet," 1898), "That Obscure Object of Desire" is a dizzying game of sexual politics punctuated by a terror that harks back to BuÃ±uelâs avant-garde beginnings. On Blu-ray from The Criterion Collection.

" (2020), starring Angela Bettis, Chloe Farnworth, Nikea Gamby-Turner and David Arquette, is set in a small-town Arkansas hospital in 1999 and follows Mandy (Bettis), a drug-addicted nurse who gets caught in the middle of a black market organ-trading scheme after her ruthless cousin, Regina (Farnworth), misplaces a kidney scheduled for delivery that night. Death soon descends on the hospital as a mob boss and an injured convict (Arquette) terrorize patients, while Mandy and Regina scramble to replace the lost organ by any means necessary. Nothing is off the table and every patient is at risk as Mandy fights to restore order and appease the ruthless black market bosses. On DVD, Blu-ray, from Magnolia Home Entertainment ... In "Yellow Rose

" (2020), starring Eva Noblezada, Dale Watson, Princess Punzalan and Lea Salonga, a Filipina teen from a small Texas town fights to pursue her dreams as a country music performer while having to decide between staying with her family or leaving the only home she has ever known. On DVD, Blu-ray, from Sony.

"The 100: The Complete Seventh and Final Season" (2020) is a three-disc set with all 16 episodes. Set ninety-seven years after a nuclear war has destroyed civilization, when a spaceship housing humanity's lone survivors sends one hundred juvenile delinquents back to Earth, in hopes of possibly re-populating the planet. The seventh and final season opens with our heroes picking up the pieces of the society they destroyed on Sanctum. Still reeling from her mother's death, Clarke (series star Eliza Taylor), perhaps more than anyone, feels the toll of years upon years of fighting and loss. The group soon finds that maintaining order among the competing factions is no easy feat, and one that has them questioning whether their commitment to doing better was worth the price. At the same time, our heroes must contend with new obstacles on a scale beyond any that they previously experienced as they unravel the mysteries of the Anomaly. On DVD and Blu-ray from Warner Archive.