As we close out 2020 and enter into what will be a much better 2021, there's only a handful of titles heading to DVD and Blu-ray this week. Things will pick up after the first, so, in the meantime:

"Honest Thief" (2020) Liam Neeson, Kate Walsh, Jai Courtney, Jeffrey Donovan, Anthony Ramos, Robert Patrick. Meticulous thief Tom Carter (Neeson) has stolen $9 million from small-town banks while keeping his identity a secret. But after he falls in love with the bubbly Annie (Walsh), Tom decides to come clean about his criminal past, only to be double-crossed by two ruthless FBI agents. 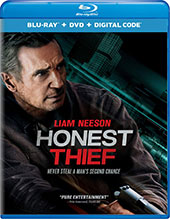 "(2020), starring Ashley Greene, David Arquette and Robert Davi, is a bio-drama about troubled Brooklyn-native street basketball legend Jackie Ryan, who confronts his inner demons after getting invited to try out for the NBA. On DVD, Blu-ray, from Gravitas Ventures ... In "The Last Shift

" (2020), starring Richard Jenkins, Shane Paul McGhie, DaâVine Joy Randolph, Birgundi Baker, Allison Tolman and Ed OâNeill, Stanley (Jenkins), an aging fast-food worker, plans to call it quits after 38 years on the graveyard shift at Oscarâs Chicken and Fish. His last weekend takes an interesting turn while training his replacement, Jevon (McGhie), a talented but stalled young writer whose provocative politics keep landing him in trouble. These two who share little in common are brought together through circumstance. Stanley, a high school dropout who has watched his life pass by his drive-through window, proudly details the nuances of the job. While Jevon, a columnist whoâs too smart to be flipping patties, contends their labor is being exploited. A flicker of comradery sparks during the long overnight hours in a quiet kitchen. On DVD, Blu-ray,from Sony ... In "Zombie Bro

" (2020), starring Lauren Grego and Cooper Flynn, when Francine catches her brother, Teddie, in the act of a zombie attack, she must convince her parents that theyâre in danger and -- worst of all -- that they have to find a way to get rid of her brother. Along the way, Francine learns how to defend herself, make a best friend for life and become closer to her idol, her father. From Indican Pictures.