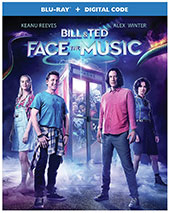 best friends set out on a new adventure when a visitor from the future warns them that only their song can save life as we know it. Along the way, they're helped by their daughters, a new batch of historical figures, and a few music legends -- to seek the song that will set their world right and bring harmony in the universe. On DVD, Blu-ray, from Warner.

"Burst City" (1982 -- Japan) is an explosive Molotov cocktail of dystopian sci-fi, Mad Max-style biker wars against yakuza gangsters and the police, and riotous performances from members of the real-life Japanese punk bands The Stalin, The Roosters, The Rockers and INU. In a derelict industrial wasteland somewhere on the outskirts of Tokyo, two rival punk bands and their unruly mobs of fans gather for a Battle of the Bands-style protest against the construction of a nuclear powerplant, bringing them head to head with the yakuza industrialists behind the development of their turf. This extraordinary celebration of Japan's punk music scene of the early 1980s thrust Sogo Ishii (now known by the name of Gakuryu Ishii), the underground filmmaking wunderkind behind such works as "Half Human: EinstÃ¼rzende Neubauten" (1986), "Angel Dust" (1994) and "Electric Dragon 80,000V "(2001), to the next level and is regularly cited as an early landmark in Japanese cyberpunk cinema. On Blu-ray from Arrow Video/MVD Entertainment ... In "Girlfriends" (1978), when her best friend and roommate abruptly moves out to get married, 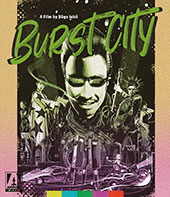 Susan (Melanie Mayron), trying to become a gallery artist while making ends meet as a bar mitzvah photographer on Manhattanâs Upper West Side, finds herself adrift in both life and love. Could a new job be the answer? What about a fling with a married, older rabbi (Eli Wallach)? A wonder of American independent filmmaking whose remarkably authentic vision of female relationships has become a touchstone for makers of an entire subgenre of films and television shows about young women trying to make it in the big city, this 1970s New York time capsule from Claudia Weill captures the complexities and contradictions of womenâs lives and relationships with wry humor and refreshing frankness. On DVD, Blu-ray, with new, restored 4K digital transfer, supervised by director Claudia Weill and director of photography Fred Murphy, with uncompressed monaural soundtrack on the Blu-ray. From The Criterion Collection. 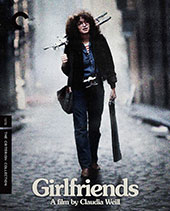 Director Woody Allen's "A Rainy Day in New York" (2020), starring Kelly Rohrbach, Timothee Chalamet, Elle Fanning, Rebecca Hall, Selena Gomez, Jude Law, Suki Waterhouse, Liev Schreiber, Diego Luna and Cherry Jones, follows the romantic exploits of a young college student (Chalamet) on a weekend trip in his hometown of New York City, trying to further bond with his college girlfriend (Fanning) while she is in the city to interview a famous film director (Schreiber). But they meet with bad weather and a series of misadventures. On DVD, Blu-ray, from MPI ... In "Hosts" (2020), starring Neal Ward, Samantha Loxley, Frank Jakeman, Nadia Lamin, Lee Hunter, Jennifer Preston and Buddy Skelton, an innocent couple become hosts to a malicious entity on Christmas eve. Throughout the night they proceed to terrorize a family of five in unimaginably violent and disturbing ways. But these demonic possessions won't end with this unfortunate family; they mark just the beginning of a horrific worldwide epidemic. From Dark Sky Films ... In "The Retreat" (2020), starring Grant Schumacher, Dylan Grunn, Rick Montgomery Jr., Chris Cimperman and Ariella Mastoianni, two best friends, Gus and Adam, set out for a winter backpacking trip in the Adirondack High Peaks of Upstate New York. After a horrifying encounter with a monster, Gus finds himself alone and lost. Now, he must fight for his life while keeping his grip on reality as heâs tormented both physically and psychologically by the evil Native American legend, The Wendigo. From Uncorkâd Entertainment ... Available on DVD and Blu-ray or on limited-edition Blu-ray and DVD â marking 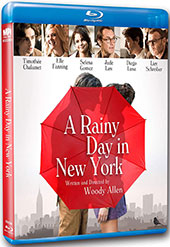 the 50th anniversary of its original release â ""The Other Side of Madness" (1971) was the first cinematic depiction of the Manson murders, filmed so astonishingly close to the time of the events that the Manson trial was still in progress. Portrayed as a modern ânoir,â it proved so shocking to audiences at the time that the film was banned in Los Angeles. Superbly photographed and directed by award-winning filmmaker Frank Howard and produced by Wade Williams, the film was partially shot in Kansas City with a cast of mostly unknown actors. However, the film transports audiences closer to the real events than most recreations have dared to go; it was partially filmed at the famed Spahn Ranch before the compound was destroyed by fire in the â70s. Selections from the original motion picture soundtrack, including âMechanical Manâ and âGarbage Dump,â written and performed by Charles Manson, will be offered on a limited-release Bonus CD (2,000 copies made) included with the purchase of the collectorâs deluxe anniversary edition Blu-ray or DVD. 4K transfer from the original 35mm camera negative. From The Film Detective ... 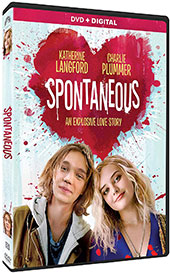 When students in their high school begin inexplicably exploding (literally ...) in "Spontaneous" (2020), starring Katherine Langford, Charlie Plummer, Yvonne Orji, Hayley Law, Rob Huebel and Piper Perabo, seniors Mara (Langford) and Dylan (Plummer) struggle to survive in a world where each moment may be their last. As an unexpected romance blossoms between them, Mara and Dylan discover that when tomorrow is no longer promised, they can finally start living for today! From Paramount ... In "Guest House" (2019), starring Pauly Shore, Aimee Teegarden, Mike Castle, Steve-O, Chris Kattan, Bobby Lee and Erik Griffi, when engaged couple Sarah (Teegarden) and Blake (Castle) buy their dream home, thereâs a catch: There's a party animal named Randy (Shore) in the guest house who refuses to leave. When Randy throws a wild, sexy pool party, the cops show up, and Blake gets arrested, ruining their backyard wedding and their marriage. On DVD, Blu-ray, from Lionsgate ... "Mortal" (2020 -- Norway), starring Nat Wolff, Priyanka Bose and Iben Akerlie, is a fantasy adventure origin story about a young man, Eric, who discovers he has God-like powers based on ancient Norwegian mythology. While hiding in the wilderness of western Norway, Eric, an American, accidentally kills a teenager in an inexplicable way and is subsequently arrested. Before being interrogated, he meets Christine, a young psychologist trying to figure out what really happened. She believes Eric and feels sympathy with him. Soon the American embassy shows up wanting Eric extradited, but he manages to flee with Christine. On the run, with both Norwegian and American authorities after him, Eric finally discovers who, or what, he really is. On DVD, Blu-ray, from Lionsgate.

One of the finest Japanese directors to emerge in the last decade, KÃ´ji Fukada has earned renown for crafting suspenseful dramas. Following 2016's "Harmonium", which captured Cannes' prestigious Un Certain Regard Jury Prize, he returns with "A Girl Missing" (2019 -- Japan), starring Mariko Tsutsui, Mikako Ichikawa and Miyu Ogawa, tense portrait of a 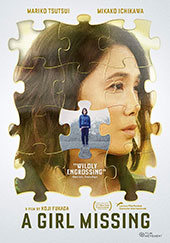 woman caught up in a spiral of defamation. In this slow-burning thriller, Ichiko (Tsutsui) works as a home-care nurse to the elderly matriarch of the Oisho family â long enough to feel like part of the family. She's closest to the eldest sister, Motoko (Ichikawa), who's studying to follow in Ichiko's footsteps. However, their happy routine is disrupted when Motoko's sister, Saki (Ogawa), is abducted. The girl is eventually returned, but it's discovered that her kidnapper was Ichiko's nephew - a fact that Motoko insists they keep between them. It's this shared secret that forges an even closer bond between the two, yielding further confessions -- some of which may be turned into weapons. From Film Movement ... Set in 1980âs Saigon, 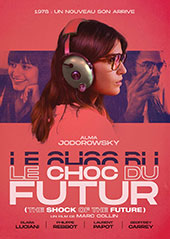 "Song Lang" (2018 -- Vietnam) is a gritty underworld noir hiding a tender, romantic heart. At the filmâs core is the unlikely bond that develops between hunky, brooding Dung (Lien Binh Phat), a tough debt collector for a ruthless loan shark, and Linh Phung (V-pop star Isaac), a charismatic young opera singer for a struggling company that performs Cai-Luong, a modern form of traditional Vietnamese folk opera. From Breaking Glass Pictures ... "Le choc du futur (aka The Shock of the Future)" (2019 -- France), starring Alma Jodorowsky and Laurent Papot, takes place in the Paris of 1978, when old musical formulas no longer charm listeners, creating the need for new music to arise in its place. In an extremely male-dominated industry, Ana (Jodorowsky, granddaughter of Alejandro Jodorowsky) uses her electronic gadgets to make herself heard, creating a new sound that will mark the decades to come: the music of the future. From Cleopatra Entertainment. 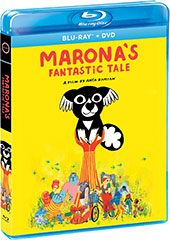 to bring peace to them and to John. Good thing Charlie has a direct line to the Man Upstairs. Awarded the Dove Seal of Approval for All Ages. From Lionsgate ... "Maronaâs Fantastic Tale" (2019 -- France) is an animated adventure that tells the poetic and life-affirming story of Marona, an optimistic stray dog who looks back on the human companions she has loved throughout her life. Born the last in the litter, little Maronaâs adventures take her through a series of names and owners â a colorful acrobat, a sensitive construction worker, and a little girl â with dazzling style, pushing animation in bold new directions. But through all of her ups and downs, "Maronaâs Fantastic Tale" is told with the patient, boundless love of a dog, reminding us that happiness is a small thing. On DVD, Blu-ray, from GKIDS/Shout! Factory.

How does a filmmaker go from creating cutting-edge work and competing in Cannes to being labelled a failed erotic filmmaker? The debut documentary feature, "Love Express: The Disappearance of Walerian Borowczyk" (2018 -- Poland), from Polish critic and academic Kuba Mikurda investigates the work of Walerian Borowczyk, a director of unparalleled creativity and sensitivity, revered in the 1970s for creations including "Goto," "Island of Love," "The Beast" and "Immoral Tales." The documentary interviews his closest collaborators, filmmakers, and leading intellectuals who put his work into perspective, including Terry Gilliam, Bertrand Bonello, Neil Jordan, Patrice Leconte, Slavoj Å½iÅ¾ek, and the late Andrzej Wajda. On DVD, Blu-ray, from Altered Innocence.

"Schittâs Creek: The Complete Collection " (2015 - 2020) is a six-disc set with all six seasons. Created by and starring Eugene Levy and Daniel Levy, this irreverent and original character-driven comedy centers on the âreversal of fortuneâ story of the once filthy-rich Rose family. Suddenly finding themselves broke, the Roses are forced to rebuild their empire in Schittâs Creek, a small town they once purchased as a joke. As the seasons go on, we see the family thrive in a place they begin to call home, ready to take their personal relationships, business pursuits and, for some, exit strategies, to the next level. From Lionsgate.