FROM THE BIG SCREEN:
"Birds of Prey (And the Fantabulous Emancipation of One Harley Quinn)," "The Call of the Wild,""Fantasy Island" and "The Photograph."

THIS WEEK'S BEST BETS:
"Film Noir: The Dark Side of Cinema II" features three classic noir films from the 1950s: "Thunder on the Hill" (1951) -From Douglas Sirk, the renowned director of "All I Desire," "Magnificent Obsession," "There's Always Tomorrow," "Written on the Wind," comes this classic film noir starring screen legend Claudette Colbert. A nun (Colbert) races against time 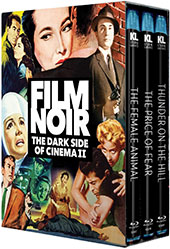 to prove the innocence of a convicted murderess (Ann Blyth) who is being escorted to prison for a date with the gallows. Thunder on the Hill is a moody mystery that serves up many twists and features an intriguing tour-de-force performance by Colbert and fast-paced direction by Sirk. "The Price of Fear" (1956) - Elegant, exotic beauty Merle Oberon plays against type in this unpredictable film noir. A woman guilty of a hit-and-run accident frames another person for the crime, but soon is implicated in a far worse situation with a gangster who uses blackmail to lure her into a murder plot. "The Female Animal" (1958) - Hollywood star Vanessa Windsor (Hedy Lamarr) is saved from a terrible on-set accident by handsome studio extra Chris Farley (George Nader). In appreciation of his skills and good looks, she sets him up as the "caretaker" of her beach house. When Vanessa's sultry daughter (Jane Powell) meets Chris, the claws come out as both ladies try to stake out his affections in this campy and lusty battle for love. Film Noir: The Dark Side Of Cinema II

is on Blu-ray from Kino Lorber Studio Classics ... 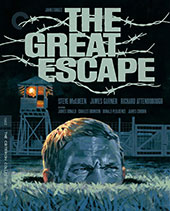 One of the most exciting adventure tales ever told, the action epic "The Great Escape

" (1963) recounts the planning, execution, and aftermath of a daring true-life escape from a German prisoner-of-war camp during World War II, in which 250 men attempted to tunnel their way to freedom. In the role that cemented his superstar status, Steve McQueen plays the motorcycle-racing daredevil who sets out to foil the Nazis, alongside an all-star cast that also includes Charles Bronson, James Coburn, James Garner, and Donald Pleasence. The expert direction of John Sturges, eminently hummable Elmer Bernstein score, and rip-roaring stunts come together in what may just be the most spectacularly entertaining prison-break movie of all time, a rousing ode to the determination, camaraderie, and courage of everyday heroes. On DVD, Blu-ray Disc, with 4K digital restoration, with uncompressed monaural soundtrack on the Blu-ray; alternate 5.1 surround soundtrack, presented in DTS-HD Master Audio on the Blu-ray. From The Criterion Collection.

" (2019),starring Jesse Eisenberg, Imogen Poots and Jonathan Aris, Tom and Gemma (Eisenberg and Poots) are looking for the perfect home. When a strange real-estate agent takes them to Yonder, a mysterious suburban neighborhood of identical houses, Tom and Gemma canât wait to leave. But 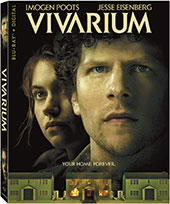 when they try to exit the labyrinth-like housing development, each road takes them back to where they started. Soon, they realize their search for a dream home has plunged them into a terrifying nightmare.ON DVD, Blu-ray, from Lionsgate ... In "Rev

" (2020), starring Francisco Filice, Vivica A. Fox, Sean Rey and Hannah Gordon, when Mikey's not racing cars, he's stealing them all over the city. But after he gets caught boosting a rare ride from a cop's house, the police force him to go undercover or go to jail. Mikey agrees to join a grand theft ring led by violent, impulsive Charlie, who'd beat Mikey to death if he knew he was an informant. Even worse, Mikey finds himself attracted to Charlie's girlfriend, Ava, and their passionate encounter sets up a bloody, powerful collision between rage and desperation. From Lionsgate ... In "A Nun's Curse

" (2020), starring Felissa Rose, Damian Maffei and Gunner Willis, on a weekend trip, a group of friends are forced to seek shelter inside an abandoned prison where a nun named Sister Monday had once been assigned. During her time at the prison, Sister Monday was suspected of killing prisoners who were serving out their sentences but, before she could be questioned, she disappeared. Or did she? From Uncorkâd Entertainment ... In "What the Waters Left Behind

" (2017 -- Argentina), starring Agustin Pardella, Damian Dreizik, Victoria Maurette, Gustavo Garzon and Evan Leed, the town of Epecuen was flooded on November 10th 1985 and was deep underwater for over 30 years. When the waters receded, the town 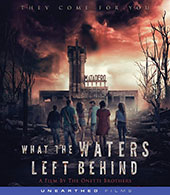 was still intact and stayed deserted, at least so they thought. A group of young people takes a trip to the ruins in order to film a documentary about Epecuen. Ignoring warnings, and after a brief tour, they get stranded in the abandoned village. Contrary to what they thought, they begin to realize that they are really not alone. On DVD, Blu-ray, from Unearthed Films ... In "Idle Hands

Collectorâs Edition" (1999), starring Devon Sawa, Seth Green, Elden Henson, Vivica A. Fox and Jessica Alba, the Devil will find work for idle hands to do ... so what happens when he chooses the laziest teen slacker in the world to do his dirty work? Anton Tobias (Sawa) is a channel-surfing, junk-food munching, couch potato burn-out who canât control the murderous impulses of his recently possessed hand. With the help of his zombified buddies (Green) and Pnub (Henson), Antonâs got to stop the rampaging devil appendage before it takes total control of his life and ruins any chance he has with class hottie Molly (Alba). On Blu-ray from Scream Factory.

" (2018 -- Italy), where each room represents a different city and time zone. As a preparatory course for long distance relationships, couples who visit are asked to adhere to its strict rules: no entering your partner's room, no cell phones, and no contact with your significant 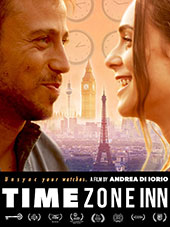 other -- except for two hours a day in the common room. Unfortunately, Mina and Enzo aren't on the same page about what they hope to learn from the Time Zone Inn in this highly-original romantic drama, the feature film debut from director Andrea Di Iorio. From IndiePix Films ... The LGBTQ comedy-drama "Fairytale" (2017 -- Italy) follows Mrs. Fairytale, a perfect housewife in 1950s America who becomes aware of her own unhappiness and embarks on a process of personal liberation. Amongst stuffed poodles, whiskey-infused teas, sinful mambo lessons, and threats of alien invasion, Mr(s). Fairytale begins to explore a world where anyone can finally be who they want to be, but behind which hides another upsetting reality. Based on the stage play by Italian actor Filippo Timi, who also stars. From Breaking Glass Pictures ... In "The Traitor

" (2019 -- Italy), starring Pierfrancesco Favino, Maria Fernanda Candido, Fabrizio Ferracane, Fausto Russo Alesi and Luigi Lo Cascio, an all-out war rages between Sicilian mafia bosses over the heroin trade in the early 1980s. Tommaso Buscetta, a made man, flees to hide out in Brazil. Back home, scores are being settled and Buscetta watches from afar as his sons and brother are killed in Palermo, knowing he may be next. Arrested and extradited to Italy by the Brazilian police, Buscetta makes a decision that will change everything for the Mafia: he decides to meet with Judge Giovanni Falcone and betray the eternal vow he made to the Cosa Nostra, and talk. From legendary Italian director Marco Bellocchio. On DVD, Blu-ray, from Sony ... In the 1990s, every boy around the world -- even amidst cultural embargoes -- was glued to VHS karate action films and dreamt of being a super hero. "Delta Zoo

" (2019 -- Lithuania), on March 11, 1990, a year before the formal dissolution of the Soviet Union, Lithuania became the first Soviet republic to declare itself independent. Reacting to Soviet aggression, the newly re-established 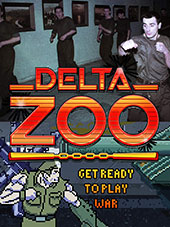 Lithuanian Army Command decided to create the first-ever national crack commando unit and gave a selective group of young men the chance to be the "Mambos" of their country as members of a top-secret Special Forces Unit aimed at countering Soviet aggression. Most members were given an animal nickname -- Spider, Horse, Whale, Crab -- hence the unit was known as the Zoo. And from parachute jumps and hand-to-hand combat training to securing the GB building in Vilnius, at the beginning of the end of the USSR, this playful documentary from filmmaker Andrius Lekavicius uses first-person interviews, cleverly stylized animation, archival footage and original music to tell the hidden story of the first-ever Lithuanian Special Forces: a courageous, impassioned, and youthful endeavor against the powers that once were. From IndiePix Films ... In "An Ideal Place to Kill" (1971 -- Italy), starring Ornella Muti, Ray Lovelock, Irene Papas and Michel Dardinet, two free-spirited teenagers, Dick and Ingrid (Lovelock and Muti), set out to spend the summer together in Italy. To pay their way they sell Scandinavian porn mags and pictures of Ingrid posing nude. But then they get busted by the cops and are given 24 hours to get out of the country. Instead of leaving they take to the road, where they come up against a thieving biker gang and they're mistaken for a pair of bank robbers. Heading south in a hurry, they run out of gas in the middle of nowhere and take refuge in the house of Barbara Slater (Papas), a seemingly bored, middle-aged housewife who appears to be up for some sexual shenanigans. The naive pair party with Barbara but soon discover she's hiding a terrible and deadly secret. Available for the first time ever on Blu-ray, restored from the original negative, complete and uncut. On Blu-ray from Mondo Macabro.

"Lucifer: The Complete Fourth Season" (2019) is two-disc set with all 10 episodes. Season Four sizzles with fiendishly clever comebacks. The charismatic, handsome Lucifer Morningstar returns resurrected after Season Three's wicked cliffhanger. His unofficial partner in crime-solving and affairs of the heart, LAPD detective Chloe Decker, returns from an extended vacation - after she saw Lucifer's devil face for the first time and realized he was, in fact, exactly the man he always claimed to be. And, finally, new to the series but not to the Lord of Hell, comes old flame and original sinner, Eve, whose charms are as tempting to Lucifer now as the serpent's big, red apple was to her back in the day. Does she want revenge for her expulsion from Eden all those years ago? Or something else entirely? On DVD, Blu-ray, from Warner ... "Shameless: The Complete Tenth Season" (2019-20) is three-disc set with all 12 episodes. The Gallaghers return for another scandalous Showtime season. In Season 10, Frank's exploits lead him to an old friend, Debbie rules over the Gallagher household with an iron fist, Lip navigates his relationship (and parenthood) with Tami, Carl faces life after military school, Liam is tutored by V about black history and culture, and Kev has an identity crisis. Plus, âGallavichâ returns as Ian and Mickey rekindle their romance in prison as both cellmates and lovers. From Warner.