FROM THE BIG SCREEN:
"Jumanji: The Next Level," "Richard Jewell," "Black Christmas" and "A Hidden Life."

THIS WEEK'S BEST BETS:
"Universal Horror Collection Volume 4" includes four tales of terror from the archives of Universal Pictures, the true home of classic horror. Boris Karloff ignites the screen as an inventor who is kidnapped by a gang of burglars and forced to help them commit robberies in 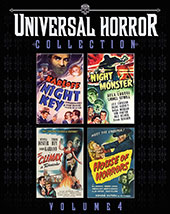 "Night Key" (1937). Bela Lugosi stars in a creepy tale of strange characters, secret passages and a murderer who masters the art of "mind over matter" in "Night Monster" (1942). In "The Climax" (1944), Karloff is terrifying as a mad doctor whose insane jealousy over a beautiful opera singer may drive him to murder. A giant of a man is used as an instrument of evil by a mad sculptor in "House of Horrors" 1946). New 2K scans. On Blu-ray from Scream Factory ... With the blisteringly funny, unapologetically confrontational satire "Bamboozled" (2000), writer-director Spike Lee examined the past, present, and future of racism in American popular culture, issuing a daring provocation to creators and 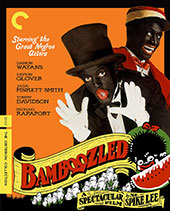 consumers alike. Under pressure to help revive his networkâs low ratings, television writer Pierre Delacroix (Damon Wayans) hits on an explosively offensive idea: bringing back blackface for a ânew-millennium minstrel show.â The white network executives love it, and so do audiences, forcing Pierre and his collaborators to confront their publicâs insatiable appetite for dehumanizing stereotypes. Shot primarily on unvarnished digital video and boasting spot-on performances from Savion Glover, Tommy Davidson, Jada Pinkett Smith, Michael Rapaport, Mos Def, and Paul Mooney, Bamboozled is a stinging indictment of mass entertainment at the turn of the twenty-first century that looks more damning with each passing year. On DVD, Blu-ray Disc with New 2K digital restoration, supervised by director of photography Ellen Kuras and approved by director Spike Lee, with 5.1 surround DTS-HD Master Audio soundtrack on the Blu-ray. From The Criterion Collection.

"By Days End" (2018), starring Andrea Nelson and Lyndsey Lantz, follows a lesbian couple down on their luck and on the verge of breaking up who find themselves fighting against the undead when a pandemic disease that causes insatiable hunger ravages the world around them. Battling depression and a ravenous horde of flesh-eating zombies, they try to survive the apocalypse armed with only a video camera and a quickly dwindling supply of weapons. From Breaking Glass Pictures ... 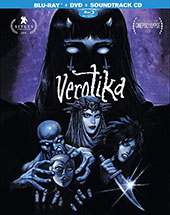 "Verotika" (2019) is a creepy, surreal and bloody horror anthology told in three chilling tales culled from rock legend Glenn Danzig's long-running edgy comic imprint of the same name. The first segment tells the story of a woman with eyeballs for nipples who conjures a giant, murderous albino man-spider every time she falls asleep. In the second story, a disfigured dancer collects other women's faces. The third and final segment is a take on the Elizabeth Bathory legend, about a countess who bathes in the blood of virgins in order to remain youthful. On Blu-ray from Cleopatra Entertainment ... In "Abigail" (2019 -- Russia), starring Tinatin Dalakishvili, Eddie Marsan and Rinal Mukhametov, Abigail's town has been closed for years due to a mysterious epidemic that caused most of the people in town to be taken away, including Abigail's father. When Abby discovers her father could still be alive, she sets out on a journey that will completely overturn everything she thought she knew about the world, her family and herself. Set in a cutting-edge magical steampunk world. On DVD, Blu-ray, from Well Go USA ... In 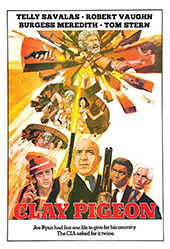 "Clay Pigeon" (1971), starring Tom Stern, Telly Savalas, Robert Vaughn, John Marley and Burgess Meredith, Joe Ryan (Stern), a returning Vietnam veteran, thinks his life is on "borrowed time" because he jumped over a grenade to save his platoon and it didn't go off. He just wants to be left alone to collect scrap, pay his rent, and smoke his "weed." Into his life comes "Redford" (Savalas), a CIA operative looking for a drug kingpin, Neilson (Vaughn), running heroin, cocaine and other habit-forming illegal drugs into the LA area. The CIA names "Joe" as the Kingpin in order to draw him out into the open, where they can catch him, making Joe the "Clay Pigeon." On DVD from MVD Visual ... In "Cannibal Apocalypse (aka Cannibal in the Streets/Invasion of the Flesh Hunters)" (1980 -- Italy), the horrors of war take on a whole new meaning for Vietnam vet Norman Hopper (John Saxon), whose quiet domestic life in Atlanta is shattered by the return of Charlie Bukowski, a combat buddy who dredges up terrifying flashbacks of flesh eating and bloodshed in the war-torn jungles. Now on the run from the law after taking a bite out of an unwilling victim, Charlie begs Norman to help him get out of town with another fellow veteran, Tom (Tony King). Soon the ragtag team of cannibals are fighting for their lives, spreading a deadly contagion through the city before heading into the sewers for a gut-wrenching climax no one will soon forget. One of the most infamous Italian horror films of all time, "Cannibal Apocalypse" was heavily censored in many countries where it played under such titles as "Cannibals in the Streets" and "Invasion of the Flesh Hunters." Experience this thrilling collision of action-packed combat and monstrous horror from cult director Antonio Margheriti ("The Long Hair of Death," "Castle of Blood," "Take a Hard Ride," "Killer Fish") in its original gory splendor for the first time in fully restored HD. Not for the faint of heart or those with full stomachs! New 4K restoration. On DVD, Blu-ray, from Kino Lorber Studio Classics.

The documentary "Celebration: Yves Saint Laurent: The Final Show" (2007) offers a rare, behind-the-scenes portrait of the legendary designer: both larger-than-life, yet astonishingly reclusive and fragile, while revealing his integral relationship with partner Pierre BergÃ©, who initially had the film banned upon the filmâs initial release in 2007 for being too revealing. The film also highlights many of the personalities instrumental to the success of the house Saint Laurent, including Loulou de la Falaise, Betty Catroux, Monsieur Jean-Pierre and Dominique Deroche. An essential addition to the fashion doc canon and an opulent tribute to the last of the great Parisian couturiers. From KimStim ... 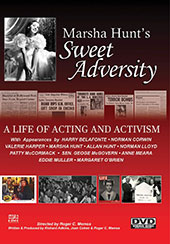 "Marsha Hunt's Sweet Adversity" (2019): In 1935, 17-year-old aspiring actress Marsha Hunt was discovered in Hollywood. She signed with Paramount Pictures and went on to a flourishing career at MGM. She made 54 films in 17 years before a series of unfortunate events led to her being unfairly blacklisted. After the blacklist, she championed humanitarian causes, forging a career as one of Hollywood's first celebrity activists. She was the first Angelina Jolie. As far back as 1955, Eleanor Roosevelt was a mentor of hers as they both worked tirelessly to support the work that the United Nations Association was accomplishing in this country. At age 102, Marsha continues to fight for causes she believes in. This film is a call to action for activists of all ages. On DVD, Blu-ray, from Zelda Can Dance Productions.

"Crashing: The Complete Third Season" (2019) contains all eight episodes of the series that draws on Peter Holmes' own experiences as a comedian as he navigates a happy balance between his old, faith-based self and the new, more ambitious comic he's becoming. "Crashing's" third season finds a reinvigorated Pete (Holmes) fresh off of his two-month college comedy tour, returning to New York with newfound confidence in his comedic abilities. No longer crashing on other people's couches -- he's got his own place in Ridgewood! - Pete reenters the NYC stand-up comedy world with newfound vigor, but soon discovers that just because he's improved, it doesn't mean he's at the head of the pack. This season, Pete starts to explore what he really wants out of comedy as he grows more assured of his talents but continues to struggle over finding a happy balance between his old, faith-based self and the new, more ambitious comic he's becoming. While Pete continues to orbit around fellow comic and ex-girlfriend Ali (Jamie Lee), he connects with a new woman, Kat (Madeline Wise), who has a unique perspective on the comedy world as someone not trying to make it big by telling jokes. Continuing to feature a who's-who of comedy talent and rising stars, "Crashing" takes a nuanced, but hilarious look at the state of comedy today, as Pete edges closer to success, one stand-up set at a time. On DVD, Blu-ray, from HBO ... "Twin" (2019 -- Norway) is a three-disc set with all eight episodes. One part thriller, one part character driven drama, this limited series from Norway starring "Game of Thrones" Kristofer Hivju is the story of Erik and Adam (both played by Hivju), identical twin brothers, who live completely different lives. Erik is a broke surfer bum. Adam is a successful family and business man. When Erik seeks out his brother for the first time in 15 years, a quarrel ends with Adam's wife, Ingrid (Rebekka Nystabakk), accidentally killing her husband. To avoid getting arrested for murder, and save his brother's family, Erik takes over Adam's identity. However, it soon turns out that the biggest challenge is not avoiding getting caught -- it's pretending to be someone you're not. From MHz Networks.