FROM THE BIG SCREEN:
"Toy Story 4" continues the adventures of our favorite animated toys, Woody (voice of Tom Hanks), Buzz Lightyear (voice of Tim Allen), Bo Peep (voice of Annie Potts) an the rest of the gang (voices of Madeleine McGraw, Christina Hendricks, Keanu Reeves, Ally Maki, Joan Cusack, Jay Hernandez, Lori Alan, Bonnie Hunt, Kristen Schaal, Emily Davis, Wallace Shawn, John Ratzenberger, Blake Clark, the late Don Rickles and Estelle Harris). This time out Woody and Buzz head out on a road trip to show a new toy, Forky (voice of Tony Hale), the pleasures of being a toy -- and discover how big the world can be for a toy. If you didn't think Pixar could keep up the "Toy Story" franchise for a new generation of kids, you're wrong. Toy Story 4

Vienna-born, New York-raised Josef von Sternberg ("Shanghai Express") directed some of the most influential and stylish dramas ever to come out of Hollywood. Though best known for his later 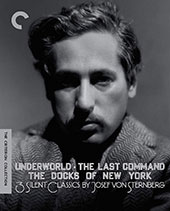 star-making collaborations with actor Marlene Dietrich, von Sternberg began his career during the final years of the silent era, dazzling audiences and critics with his films' dark visions and innovative cinematography. The titles in "3 Silent Classics by Josef von Sternberg

," on Blu-ray for the first time this week, made on the cusp of the sound age, are three of von Sternberg's greatest works, gritty evocations of gangster life ("Underworld," 1927), the Russian Revolution ("The Last Command," 1928), and working-class desperation ("The Docks of New York," 1928) rendered as shadowy movie spectacle. High-definition digital restorations of all three films, from The Criterion Collection.

" (2019 -- USA/Sweden), starring Florence Pugh, Jack Reynor, William Jackson Harper and Will Poulter, a couple travels to Sweden to visit a rural hometown's fabled mid-summer festival. What begins as an idyllic retreat quickly devolves into an increasingly violent and bizarre competition at the hands of a pagan cult. On DVD, Blu-ray/DVD Combo, from Lionsgate ... In "Gwen

" (2018), starring Eleanor Worthington-Cox and Maxine Peake, Gwen is a young girl whose life seems to be collapsing around her. Struggling with her motherâs mysterious illness, her father's absence and a group of angry villagers threatening to take her farm, Gwen must find the strength to guide her family through the darkness. But as a malevolent presence begins to take grip of her home, it becomes apparent there is a greater evil that may be too strong to overcome. Atmospheric arthouse folk tale set in the hills of Wales during the industrial revolution. On DVD, Blu-ray, from RLJE Films ... 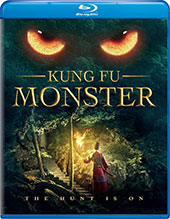 " (2018 -- China), starring Louis Koo, Zhou Dongyu, Haden Kuo and Cheney Chen, is a Wuxia fantasy about an animal trainer in the Ming Dynasty who releases a gentle, gremlin-like ball of fur he names Lucky into the world after he witnesses its mistreatment by Crane, an evil eunuch. This infuriates Crane, who immediately puts a huge bounty on both Ocean and Luckyâs heads. From all corners of China, bounty hunters with the most diverse backgrounds and masters of the martial arts sign up for the hunt. What they are unaware of though, is that Luck is harmless -- as long as heâs happy. On Blu-ray from Well Go USA ... "The Wedding Guest

" (2018 -- UK) is a globetrotting thriller from acclaimed director Michael Winterbottom -- it's a tour through the shadowy underworlds and hidden realms of Pakistan and India. Jay ("Slumdog Millionaire's" Dev Patel) is a man with a secret who travels from Britain to Pakistan to attend a wedding -- armed with duct tape, a shotgun and a plan to kidnap the bride-to-be (Radhika Apte). Despite Jay's cool efficiency, the scheme quickly spirals out of control, sending Jay and his hostage on the run across the border and through the railway stations, back alleys and black markets of New Delhi -- as all the while attractions simmer, loyalties shift and explosive secrets are revealed. On DVD, Blu-ray, from MPI/Dark Sky Films ... 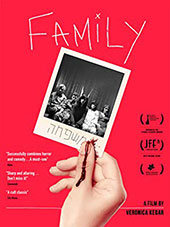 Home is where the hurt is in "Family

" (2017 -- Israel), starring Veronica Kedar, Mira Awad, Tommy Baremboem, Eli Danker and Evgenia Dodina, but Lily would do anything to make it go away. In a perfect world, she would have grown up with a loving father, a caring mother, a sane sister and a brother who wasn't madly in love with her. But you can't always get what you want, and Lily finds herself in the living room, staring at four dead bodies. She goes to her therapist after hours, to confess and make sense of her confusing day. But her therapist isn't home. Instead, her judgmental insensitive teenage daughter ... is. Lily finds herself, once more, locked in a battle of wills for some serious adult attention. From IndiePix Films ... In "Light of My Life

" (2019), written, directed by and starring Casey Affleck, and co-starring Anna Pniowsky, Tom Bower and Elisabeth Moss, a decade after a plague has wiped out nearly all of the worldâs female population, a father (Affleck) and daughter live on the outskirts of whatâs left of civilization as they once knew it. Disguising his daughter as a boy, the father struggles to protect her from newfound threats as they are forced from their home into dangerous territory. Prepared to defend his daughter at all costs, their bond and the character of humanity is tested. On DVD, Blu-ray, from Paramount ... After uncovering the CIAâs ruthless master plan for world domination by gaining complete mind control over the entire population, top scientist Joseph Markham is ultimately left with a choice: save the lives of billions ... or the life of his wife, who has been kidnapped, interrogated, and brutally tortured as she viciously fights for her life in "Art of Deception

" (2018), starring Anzu Lawson, Micah Fitzgerald and Keenan Johnston. A nationwide manhunt ensues, deadly assassins pursue, and one manâs decision will determine the fate of the world. From Breaking Glass Pictures ... 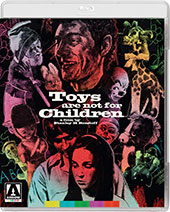 " (1972), a twisted tale of a young woman whose severe daddy issues send her on an unforgettably bleak downward spiral. Yearning for the love of her absentee father, Jamie inhabits an infantilized world surrounded by toys, including those which her wayward pops bizarrely continues to send her. Unable to consummate her new marriage with dashing colleague Charlie, Jamie's chance encounter with aging sex worker Pearl leads her into the murky world of prostitution where her most disturbing erotic fantasies begin to play out. Grim, quirky and strangely affecting in equal measure, Stanley H. Brasloff's film is a truly one-of-a-kind effort from the heyday of the American exploitation independents, which builds to a haunting and devastating climax that lingers long after the credits roll. Brand new 2K restoration from original film elements. On Blu-ray from Arrow Video/MVD Entertainment. 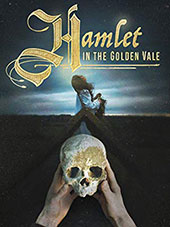 In "Hamlet in the Golden Vale

" (2018), Roll The Bones -- a New York-based immersive theater company -- took over a five-hundred-year-old castle in Co. Tipperary, Ireland. Over three weeks, a threefold creative endeavor emerged ... a live immersive performance, a 360Â° virtual reality experience, and this feature film. Modern in spirit while faithful to Shakespeareâs text, each medium tackled a different perspective of the same story: eight actors living in close quarters, each taking multiple roles in the productions, immersed in the world of Hamlet. On DVD, Blu-ray, from Random Media .

" (2019) stars Ian McShane, Timothy Olyphant, Molly Parker, Paula Malcomson, John Hawkes, Anna Gunn, Dayton Callie, Brad Dourif, Robin Weigert, William Sanderson, Kim Dickens, Gerald McRaney in a continuation of the story begun in the critically acclaimed, Emmy-winning HBO series. The movie follows the indelible characters of the series, who are reunited after 10 years to celebrate South Dakotaâs statehood. Former rivalries are reignited, alliances are tested and old wounds are reopened, as all are left to navigate the inevitable changes that modernity and time have wrought. On DVD, Blu-ray, from HBO ... 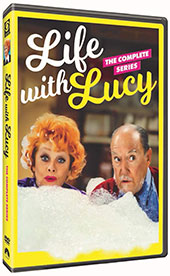 "Life With Lucy: The Complete Series" (1986) is a two-disc set with all 13 episodes; five of which have never-before been seen since the show was canceled after eight episodes. Lucille Ball stars as Lucy Barker, a widowed grandmother who has inherited half of her husband's hardware store with his business partner, Curtis McGibbon (Gale Gordon). Things take a turn for the hilarious as Barker insists on hilarious out in the store despite knowing nothing about the business. Guest stars include John Ritter, Peter Graves and Audrey Meadows. From CBS/Paramount ... "Vikings: Season 5, Volume 2" (2018-19) is a three-disc set with all 10 episodes. As the explosive second half of "Vikings Season Five" begins, Ivar the Bonelessâ tyrannical reign as king of Kattegat ushers in a new Dark Age for Scandinavia. And while Bjorn and Lagertha flee Ivarâs murderous forces with Bishop Heahmund, Duke Rolloâs return brings even more upheaval. On DVD, Blu-ray, from Fox.