The DVD highlight this week is The Criterion Collection's release (in one set) of two versions of "The Killers," Ernest Hemingway's simple but gripping short tale. The first was adapted by noir stylist Robert Siodmak ("Criss Cross") in a 1946 film that helped define the noir style and helped launch the careers of Burt Lancaster and Ava Gardner; the second was 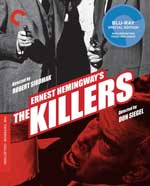 directed by Don Siegel ("Dirty Harry") in a brutal 1964 version, starring Lee Marvin, Angie Dickinson and John Cassavetes, that was intended for television but deemed too violent for home audiences and was released theatrically instead. In both films, hit men knock off a victim who doesn't resist them. In the 1946 version, an insurance investigator (Edmond O'Brien) tries to find out why. The second film is told from the point of view of the two hitmen, who attempt to unravel the mystery behind why the victim "just stood there and took it," leading them to a million dollar robbery (co-stars Clu Gulager, Claude Akins and Ronald Reagan. The ending of this film is one of my all-time favorites as Marvin, mortally wounded, goes after double-crossing femme fatale Dickinson, and, preparing to kill her, utters one of the most existential closing lines in the history of film. The set features new high-definition digital restorations of both films, with uncompressed monaural soundtracks on the Blu-rays. Extras include Andrei Tarkovsky's short film adaptation of "The Killers

," made when he was a student in 1956; an interview from 2002 with writer Stuart M. Kaminsky about both films; a piece from 2002 in which actor Stacy Keach reads Hemingway's short story; a Screen Director's Playhouse radio adaptation from 1949 of the 1946 film, starring Burt Lancaster and Shelley Winters; an interview from 2002 with actor Clu Gulager; an audio excerpt from director Siegel's autobiography, "A Siegel Film," read by actor and director Hampton Fancher; trailers; essays by novelist Jonathan Lethem and critic Geoffrey O'Brien.

Also due this week: "Maggie

," which received high praise from critics but floundered at the boxoffice, takes place in a future world narrowly recovering from a near apocalyptic zombie virus. Arnold Schwarzenegger stars (in a nice turn in a serious role) as a father who must protect his infected daughter from the frightened town; Abigail Breslin stars as the teenager with only a precious few weeks to live who must find the strength and bravery to face her fleeting mortality. From Lionsgate ... In "Woman in Gold

There's a plethora of 'B' matter this week: In alphabetical order there's:


ON THE INDIE FRONT:

In "The Encore of Tony Duran

" (2011), starring Elliot Gould, William Katt, Gene Pietragallo, Nikki Ziering, Cody Kasch, a down and out performer finally hits rock-bottom but is able to make an inspiring rebound from the brink under the guidance of a friend (Gould). From Cinedigm ... In "The Lovers 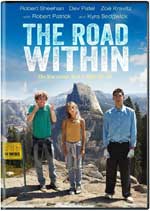 brain-dead. In his comatose dream state, Fennel is transported to India circa 1778, where young British captain James Stewart (also played by Hartnett) embarks on a life-threatening mission and a steamy romance with a female warrior (Bollywood superstar Bipasha Basu).On DVD, Blu-ray Disc from IFC Films ... In "The Road Within

" (2014) Robert Sheehan, Dev Patel, Zoe Kravitz, Robert Patrick, Kyra Sedgwick, Vincent (Sheehan), a young man with Tourette's syndrome, just has lost his mom. As his symptoms get worse, his dad (Patrick), a frustrated politician, sends him to a behavioral clinic run by an unconventional doctor (Sedgwick). But Vincent made his mom a promise, and with the help of a rebellious anorexic (Kravitz) and his withdrawn OCD roommate (Patel), the three embark on a life-changing race to the sea that includes car theft, shoplifting, fights, self-discovery, and maybe finding a new way to live. On DVD, Blu-ray Disc from Well Go USA. 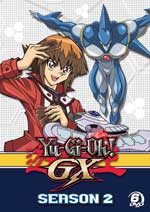 episodes of the second season and is the second spin-off series of the fan-favorite global franchise based on the Yu-Gi-Oh! trading card game, which has grossed more than $20 billion. It's year two at Duel Academy, and this semester is more intense than ever. Jaden somehow passed his finals, so he s now back with his friends to continue his training at the world's most prestigious dueling school. But it's not all about classes and textbooks. This year is filled with one high-stakes battle after another as Jaden faces all new rivals like Pro League All-Star Aster Phoenix, dino duelist Tyranno Hassleberry and the sinister Sartorius.On DVD from Cinedigm.

" (2014) is a documentary inspired by the acclaimed book by Naomi Oreskes and Eric M. Conway, and directed by Academy Award nominee Robert Kenner (Best Documentary, "Food, Inc.," 2010) explores how the media can twist and spin stories, confuse the public, and delay public action on some of the most pressing issues of modern times -- from 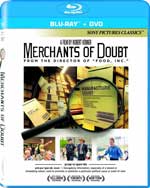 tobacco to climate change. Kenner lifts the curtain on a secretive group of highly charismatic, silver tongued pundits-for-hire who present themselves in the media as scientific authorities -- yet contrarily are aiming to spread maximum confusion about well-studied public threats ranging from toxic chemicals to pharmaceuticals to climate change. Kenner interviews individuals on both sides of the argument including scientists, whistle blowers and activists to get a full perspective on the issues at hand. Some of the most insightful moments include interviews with former Republican Congressman Bob Inglis; Marc Morano, executive director of ClimateDepot.com; and Stanton Glantz, an American Legacy Foundation Distinguished Professor of Tobacco Control. In a Blu-ray/DVD Combo from Sony ... "Deli Man

" (2015) is a lively look at the Jewish delicatessen in America. Jewish culture reflects the heart of a vital ethnic history. As that culture continues to shift and adapt alongside mainstream America, delicatessen food -- as its name suggests -- remains a beloved communal delicacy. In Houston, Texas, third-generation deli man Ziggy Gruber has built arguably the finest delicatessen restaurant in the U.S. His story -- augmented by the stories of iconic delis such as Katzâs, 2nd Avenue Deli, Nate 'n Al, Carnegie, and the Stage -- embodies a tradition indelibly linked to its savory, nostalgic foods. Includes interviews with Larry King, Jerry Stiller and Fyvush Finkel. On DVD, Blu-ray Disc from Cohen Media Group ... "Beyond 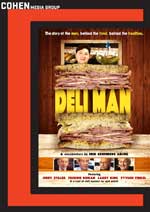 Zero: 1914-1918" (2015): Continuing his collaborations with leading contemporary composers and musicians, "Beyond Zero: 1914-1918" is a collaboration between filmmaker Bill Morrison, the celebrated Kronos Quartet and Serbian composer Aleksandra Vrebalov. Sourcing original 35mm nitrate footage shot during the first World War, Morrison -- called "one of the most adventurous American filmmakers" by Variety, preceding a recent mid-career retrospective at MoMA -- has crafted a unique contemplation, piecing together a visual exploration from footage that has never been viewed by modern audiences, and will never be seen again outside of this film. Morrison's work is characterized by his sensitive approach to found, often decaying, film footage, and his close collaboration with contemporary composers. Included on the DVD is an exclusive video of the Kronos Quartet performing the piece at the 2014 Edinburgh International Festival. On DVD. from Icarus Films. 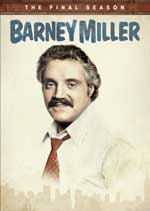 three-disc set with 22 episodes. Acclaimed throughout its eight season run, Barney Miller remains a beloved sitcom for its quirky yet humanistic exploration of the lives and exploits of a police squad in New York's Greenwich Village. A comedic peek into the world of the American Everyman starred Hal Linden, Ron Glass, Max Gail, James Gregory, Ron Carey and Steve Landesberg. From Shout! Factory ... "Bitten: The Complete Second Season" (2014) is a three-disc set with all 10 unedited episodes, $39.98 from Entertainment One ... "House of Cards: The Complete Third Season" (2015) is a four-disc set with all 13 episodes. From Sony.

Check out other July 7-July 13 DVD releases and reviews at OnVideo.