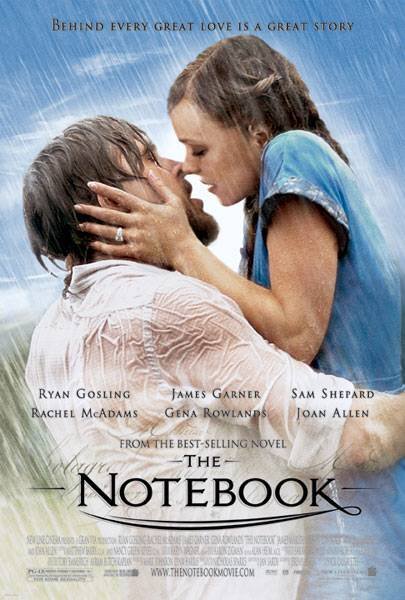 Another novel based film that I have seen on the big screen. The first part of the film was engaging. Noah, played by James Garner, was very charming when courting Allie (Gena Rowlands). The stunts pulled were very original. As in life, we all have certain gestures to win the heart of a girl. The only concern I had was there were some portions of the film that was too long and that the ending based on the book was different. The locations and quality of film was eye catching. It is a roller coaster of emotions toward the end of the film.

In my opinion, love is solid when sacrifice and persistence are involved. Noah did this by writing Allie 365 letters and by reading the notebook to remember everything since she was sick. Proving ones love is something that occurs every day in our lives. Another reason I didnât give it a perfect rating was it didnât have a cheerful ending despite the efforts of Noah. Yes they passed away together holding hands, but so much time was wasted by Allie, going back and forth due to the confusion. I guess one of the messages of the film is once you found the love of your life, be prepared for obstacles and show an effort to make it last. I know I am.