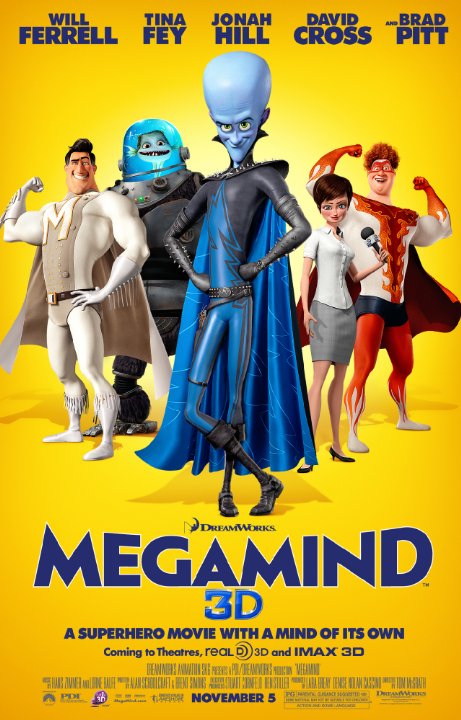 It is a scenario which we see in numerous films, the underdog falls in love with the beautiful woman, proves himself as the hero but it doesn't matter because she falls in love with who he is underneath. We have seen this a lot, but not so much in animated films. It is not often we see the ugly animated character get the gorgeous girl, but you do in "Megamind"! The film does fit into the animation trend as of late of the bad guy becoming the good guy, but gives it the twist with this unsung hero getting the girl, which will do good things for peoples self esteem. Even if you are blue with a massive forehead and alien looking you can still get the one you love by being yourself! Megamind (voiced by Will Ferrell) has never been good at anything besides being bad. The means of his existence is to fight with Metro Man (Brad Pitt), but when he actually defeats Metro Man, he is completely confused by his new found dominance and lost for what to do next. He decides to create a new super hero for the town, Titan (Jonah Hill) so he will have someone to fight. One thing he didn't count on was failing in love with Titan's crush, news reporter Roxanne Ritchie (Tina Fey) and bringing out more bad in Titan than Megamind ever had.

"Megamind" is a great, fun family film to watch. It is not just a film for children as their are many themes there for adults as well, such as the romance theme which children will of course be unable to relate to. The graphics are amazing in the film and it is one film which is worth seeing in 3D while it is in the cinemas. It is well written and has a lot of great laughs throughout. However, the ending won't be a surprise to anyone and will be something most people will see coming from the very beginning.

"Megamind" has some big names which have contributed their vocal talents to the film. The one thing that is obvious with this is that with each of the cast members, they do not seem to go the extra mile with their characters voices. Each of them, bar perhaps Will Ferrell , plays the type of character they would normally play in a film which they would physically appear in and it is easy to pick who's voice is which. For example, Brad Pitt plays the good looking hero, Tina Fey plays the businesswoman who has too little time for her personal life and Jonah Hill plays the overweight nerd who can't be taken seriously. Will Ferrell does definately do a good job at providing the voice of Megamind and, unlike the others, you can often forget that it is Ferrell's voice you are hearing.

If you are taking your children to see "Megamind", you will probably find that it is more a boys movie than a girls movie. Children aside, it is a film that all ages will enjoy. The graphics are great to watch and the script is witty and funny. Overall, besides the romance, it isn't the most original film to come out in the last few years and it is quite predictable, but definately good for a laugh.