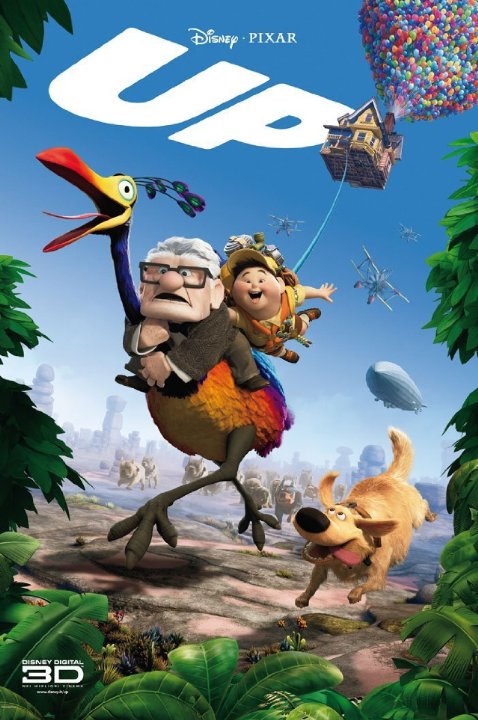 Here's the common process of how Pixar movies have been going as of late: You see the first details and think, "How's this going to be a decent movie?", then you see the more detailed trailers and you think, "Huh, this looks pretty interesting. Let's give this a shot.", then you go out to see the movie, and then it ends up being one of the best movies you'll see that year. That's basically what happened with Up.

Yeah, I just got around to seeing Up at long last, and it followed the process I mentioned and as a result brings out Pixars 10th great contribution to computer animated films (at least if you liked Cars).

The story plays out like this, a 78-year-old man named Carl Fredricksen (Ed Asner) is out to fulfill his lifelong dream to travel to Paradise Falls in South America. What he doesn't expect to carry along on the ride though is a Wilderness Explorer named Russell (Jordan Nagai) while enduring many South American environments and obstacles. The movie begins with Carl from 70 years ago when he is in theaters watching the latest movie about his idol Charles Muntz (Christopher Plummer) and then on his way home meets his bride to be Ellie (Elie Docter). They make it their life's goal to one day go to South America to see Paradise Falls, but life keeps getting in the way to the point of where they keep having to use money to make ends meet. Carl eventually makes enough money a few years prior to the main story, but only to see Ellie die of old age before being able to invite her on a trip to South America.

The movie follows the adventures of Russell and Carl to reach Paradise Falls, and yes like the movie advertised, they do so when Carl ties thousands of balloons to his house and builds a navigation system into his living room. (Yes the Mythbusters busted this myth already, but pretend they haven't) Carl and Russell encounter a dog with a talking collar, they encounter a rare species of bird, they find they're in the middle of a scheme by someone who had arrived earlier (Won't spoil). What ensues is a great mix of comedy and heart felt moments, there are points in the movie where you'll laugh uncontrollably, there are parts where you might be moved to tears (This was the second computer animated film that even had that effect on my dad, the first one being WALL-E).

In terms of production values, the visuals just continue to get more polished and eye pleasing with each passing year like with every Pixar film. Of course Carl's chin is a bit square, but since this is a more cartoony visuallook that's nothing much to complain about. The voice acting is just as great even if there aren't many familiar sounding people that you might know from previous movies. Of course there's also the fact that some theaters offered to show the movie in 3D, and if you're wondering, yeah I got the glasses. The 3D effects seem odd at first, but that's mainly when you first step into the theaters, then when you get used to them, which is some time after the trailers are done showing, it becomes second nature.

So overall, if you saw the trailer, you know that you can expect another great hour and a half with Pixar and the gang. Years from now, there will be many Pixar movies to choose from for kids to watch as clas sics, and Up makes for so far a tenth candidate. Meanwhile in the now, you'll have a ball be it in terms of getting caught up with the humor or being engaged with Carl's development. I'd definitely say that this is worth seeing if you haven't seen it already.

Side-note
Pixar offers another short like they've been A Bug's Life, this one being "Partly Cloudy." It's a short based on Storks bringing babies down to the Earth, and they reveal that babies of all species are made by clouds. Great appetizer if the movie feels a bit too short to you.