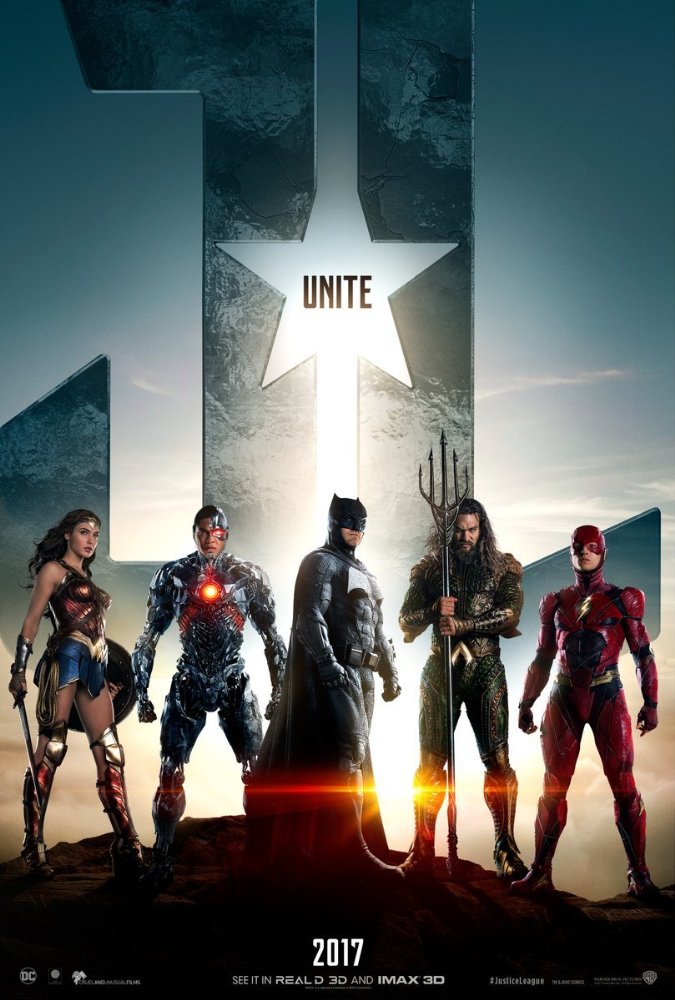 Here we go again - just when it seemed the DCU had turned things around with Wonder Woman, they take another step back. While Justice League isn't a gloomy mess like Batman v. Superman or a wild mess like Suicide Squad, it instead is just a kind of average outing - the villain is forgettable, many of the jokes fall flat and what is supposed to be this ultimate team to rival The Avengers instead feels like an unfocused mess.

First, lets see what's good here - new characters Aquaman (Jason Momoa) and The Flash (Ezra Miller) are a very welcome addition. Both get decent screen time, have some fun moments, some serious moments and feel suitably fleshed out. If I took away anything from Justice League, it's that I can't wait to see what their respective solo films turn out like. Cyborg (Ray Fisher) is not as effective, but only because I feel he got the short end of the stick in the story department. Apparently a lot of Cyborg footage was left on the cutting-room floor, that that's too bad, because it seems like his character is one of the more important when it comes to the Justice League story.

Also good (SPOILER ALERT) - it's nice to see Superman again, and, for once, he's not entirely cynical. This is definately my favorite movie Henry Cavill has portrayed the Man of Steel - even if gets the least amount of screen time. Gal Gadot is back in fighting form as Wonder Woman, picking up where her film left off. Ben Affleck is still good as Batman, but you can tell he's ready to call it day and hand it off to someone else. He's tired - and it shows. The supporting cast is also strong, if underutilized. Amy Adams (as Lois Lane) and Jeremy Irons (as Aflred) get he best scenes and lines, though Diane Lane, Ray Fisher and J.K. Simmons are welcome when they show up.

The characters, for the most part, work - even if the humor sometimes feels forced (probably trying to make up for the too-dark previous films), but it's not the characters or dialogue that makes the movie fall flat, it's the story. First, Steppenwolf (voiced by CiarÃ¡n Hinds) is too generic a villain. He's evil for evil's sake with some story about how he tried to conquer the Earth before, but the combined forces of the Amazon, Atlantians and various tribes of men came together to drive him back - the first time he had to retreat. He also had to abandon his three magic Mother Cubes that, when brought together, essentially destroy whatever planet it happens to be on - terraforming it into a hellscape. The death of Superman has apparently made people on Earth so damn depressed, it has re-activated these cubes and called back Steppenwolf. But, instead of a mighty army to fight him, we have a rich guy with toys, a really fast teen, a mostly mechanical dude, a part-goddess and a fast swimmer with a pitchfork (sorry, trident). But don't worry, they have an ace up their sleeve - it only involves an insane plan to resurrect a Kryptonian - who may or may not decide to kill them all.

But the story spends the most time getting to know the new guys - unlike The Avengers, where everyone already had a movie, most of these guys have barely been mentioned, let alone fully fleshed out. It makes the beginning go by a bit slow while also making the ending feel rushed. Sure, there are some great action scenes (the fight with resurrected Superman is really fun), but it just doesn't have that impact it should.

Justice League, like most of the DCU films, is not a complete failure, but it also falls short of where it should. It doesn't help that the film changed directors or that it had to follow a film as well-received as Wonder Woman (not to mention the continued success of the MCU films). DC still has plenty left in the tank, but you can't help but feel they're just spinning their wheels.