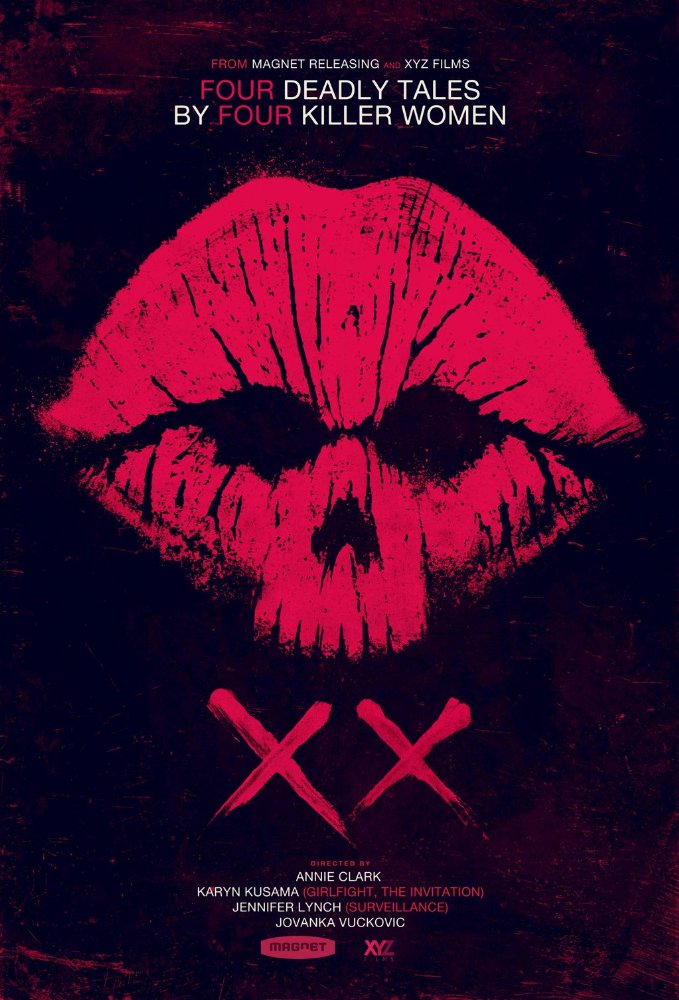 Horror anthologies have experienced a resurgence recently with the likes of Trick 'r Treat, The ABCs of Death and V/H/S proving that you don't need to go full-length to find effective horror. XX follows the same pattern but is directed by an all-female lineup: Roxanne Benjamin, Karyn Kusama, St. Vincent and Jovanka Vuckovic with the added benefit of each short having a female lead. There is also a nice, creepy intro and interstitial from SofÃ¬a Carrillo that adds to the flavor. While overall I felt there could have been more horror, the four stories stand on their own and if you are a fan of the horror anthologies, XX is a solid add to the collection.

The first, and arguably best, of the shorts is "The Box", directed by Jovanka Vuckovic. Adapted from a story from horror author Jack Ketchum, the film follows a mother (Natalie Brown) who is out with her children shortly before Christmas. When her son (Peter DaCunha) asks a stranger (Michael Dyson) about his package while riding the subway, the man obliges - and we see some change happen. It soon becomes apparent that the son has been affected by something - he no longer wants to eat. As the days go by, she, her husband (Jonathan Watton) and her daughter (Peyton Kennedy) become increasingly distraught and concerned. When the son passes along his "gift" to the rest of the family - except for the mother - all she can do is watch as the rest of her family wastes away. The film only has one, truly horror moment (a family dinner you won't soon forget) but the reason this works out best is because it doesn't give you answers - it allows you to jump to your own conclusions. Though I would have preferred some kind of explanation, maybe the vague ending is for the better.

The second story, "The Birthday Cake", by St. Vincent (as Annie Clark) is more of a black comedy than horror. A perfectionist wife and mother (Melanie Lynskey) is looking to thrown the most absolute best party for her daughter (Sanai Victoria) but things are complicated when she discover's her husband's body, who has apparently overdosed, and she tries her best to hide him. Sheila Vand stars has her harried housekeeper/nanny - and it ends on a tragic yet hilarious note and the the full title of the film reveals just how tongue-in-cheek this one really is. It's hard to quantify this one as horror, but it's a decent effort none-the-less.

The third film, "Don't Fall" from Roxanne Benjamin is the most straight-up horror film of the bunch. The story follows four friends the over-cautious Gretchen (Breeda Wool), her stoner brother Paul (Casey Adams), bookworm Jay (Morgan Krantz) and adventurous Jess (Angela Trimbur) on a hiking trip. It seems the four have ditched the normal accommodations for something a bit more out of the way. Maybe too far as a chance encounter with a pre-Native American pictograph unleashes an evil that transforms Gretchen (in some of the best effects in the anthology) into a monstrous killer. This one also serves up the most gore. It's a bit too monster-of-the-week but I did love look of the monster overall.

Finally we have "Her Only Living Son", which seems to be a homage of sorts to Rosemary's Baby. Cora (Christina Kirk) is about to celebrate her son's (Kyle Allen) 18th birthday, but increasingly disturbing incidents and signs point to a malevolent force trying to take control. It doesn't help that the people around her also seem to want her son to fulfill some great destiny. There is a lingering sense of dread that this one brings, but I wish the characters had been a bit more fleshed out and the ending here is a bit of letdown.

Finally, I need to mention SofÃ¬a Carrillo's great interstitial animation. Evoking the spirit of the great Czech animator Jan Svankmajer and the demented masterpieces of the Quay Brothers, the short, stop-motion animated segment concerns a living dollhouse that feeds not only itself - but looks to help another. Dolls can be creepy and the short segment is perhaps the most disturbing part of the whole movie.

XX gives women their due, even if I was kind of hoping that the Soska sisters would have shown up. Overall, the horror here is more psychological than outright terrifying, but it evokes the spirit of horror. For an anthology it works out pretty good in the end.