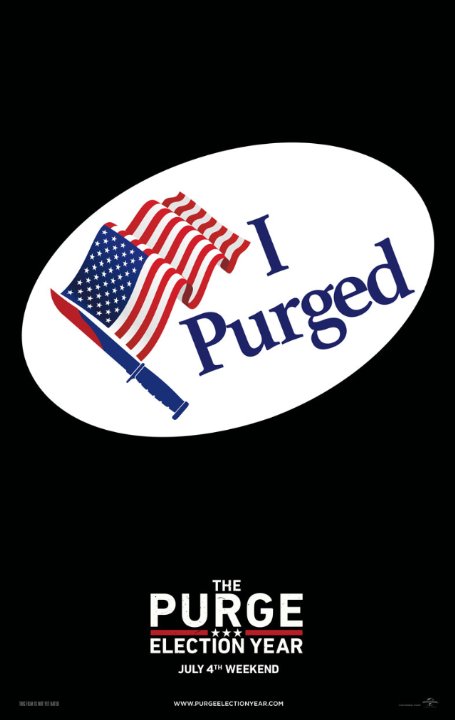 The Purage: Election Year continues the story of Sgt. Leo Barnes (Frank Grillo - badass and loving it) as he now works security detail for an anti-purge presidential candidate Senator Charlie Roan (Elizabeth Mitchell) who has been making waves and gaining support as information comes out that the Purge is a money-making scheme for both the insurance companies and the wealthy elite who get to sit out the pPurge.

But The Founders, the group behind the original Purge, are unhappy, thus they lift the ban on killing people in power and make it open-season for all. Of course the senator's security is turned and she has to go on the run during purge night in order to survive and live to the election. In a separate story that soon lines up with her own, deli owner Joe DIxon (Mykelti Williamson) is forced to protect his business when the insurance becomes too high and he can't afford the increase. He is joined by Marcos (Joseph Julian Soria) along with a former gang-member turned Purge ambulance driver Laney Rucker (Betty Gabriel), who is still pretty handy with a gun.

The Purge has always had an undercurrent of the haves vs. have-nots, with the wealthy being portrayed as the bad guys while the poor and inner-city dwellers are treated like chattel. Election Year becomes a bit heavy-handed in this aspect - especially in a year when we have such colorful presidential candidates out there. Instead of delivering a message with subtle grace, it's delivered with all the subtlety of a sledgehammer. Sure, it's more satire than anything, but the obvious liberal bent is impossible to avoid. So while there is plenty of violence to go around - fron gun-toting murderous schoolgirls to white-power mercenaries to foreign purgers dressing up in blood-stained presidential masks - the liberal message rings more loud and clear and I can see where many might be turned off.

But besides this heavy-handed approach at politics, the movie benefits from Grillo being his usual tough self, Mitchell does great as being vulnerable while doing her best to fight back and Williamson is rock solid as the voice of the people (and often of reason). While there are a few too many stereotypes to go around, the film is at its best when its trying not to take itself too seriously.