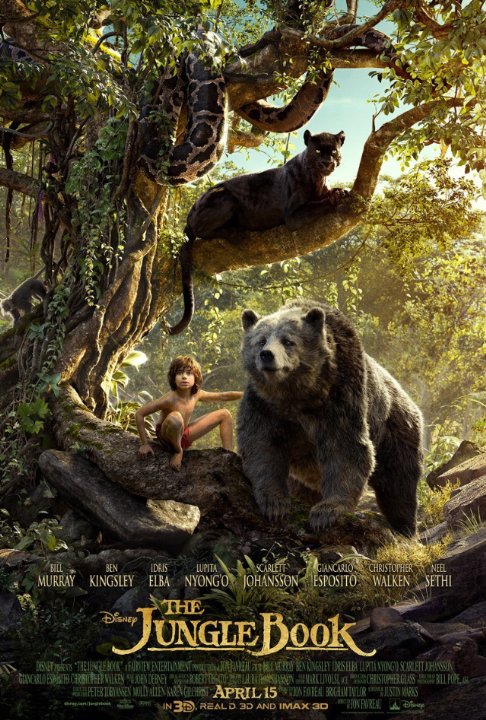 When Disney first started the trend of turning their beloved animated classics into current live-action iterations, I admit I was skeptical. However, as the films continue to come out, I have to say that it seems to be working. Granted, when you have talent like Jon Favreau on board directing, with talent like Bill Murray, Christopher Walken, Lupita Nyong'o, Scarlett Johansson and Idris Elba as well - it's a recipe for success.

The story of The Jungle Book doesn't follow the animated film nor the books exactly - but takes bits and pieces from each on accordingly. I have to say, the film works even better with the casting of Neel Sethi - essentially an unknown young actor. The whole thing was filmed on a lot so there is a lot of green screen and CG involved and I have to say that Sethi handled things better than most adult actors would have. His expressions are genuine and fun to watch - he looks like he's having a blast and thus the being one of the only actors on screen he does a remarkable job of holding things together.

Sethi is, of course, Mowgli, the orphaned boy raised by a pack of wolves led by Akela (Giancarlo Esposito) and den mother Raksha (Lupita Nyong'o) and a military-minded panther, Bagheera (Ben Kingsley). When a water truce brings together the animals of the jungle, it also brings in the tiger Shere Khan (Idris Elba), who mistrusts the man-cub, who is growing older and presents a threat. He essentially lays down an ultimatum that once the water returns to the jungle, the boy is to be given to him or he will start attacking. Instead of handing him over, they decide to return Mowgli to the man village - but the journey doesn't go exactly as planned.

This, of course, leads to Mowgli encountering the sinister snake Kaa (voiced for the first time by a woman - the excellently-chosen Scarlett Johansson) somewhat lazy but endearing Baloo the bear (Bill Murray - in top form, I must say) and the megalomanic Gigantopithecus (as opposed to an orangutan) voiced by the ever-talented Christoper Walken. I love Louie's introduction - inspired by Apocalypse Now - such an unexpected yet perfect idea. There is, of course, a final confrontation between Mowgli and Shere Khan - putting to use both the animal instincts he has grown up with and his use of "tricks" that come from his human side.

The film borrows from several Disney works - influences from Bambi and The Lion King most prominent, but it works out for the film. They even manage to slip in some of the classic songs - "The Bare Necessities", "Trust in Me" and (my favorite) "I Wanna Be Like You" (Walken has a great voice to go along with his dancing moves). While not the full versions (though the credits do have the full song), it's those kind of touches that makes the film stand out.

Now, could things have been better? I wish we would have gotten more of Johansson's Kaa - apparently a few scenes were cut out and thus the role, while good, feels too short. Also, none of the elephants spoke, which felt weird, seeing as they are the true kings of the jungle and it would have been nice to get someone to voice the majestic creatures. And while it was nice to see some homages to past Disney works, the ending felt a little too on-the-nose compared to The Lion King for its own good.

The Jungle Book continues Disney's foray into live-action retelling of its classic tales - but it's not derivative and it feels like a whole new adventure. This formula continues to work well and though I'm always suspect about remakes and such, these continue to be just as entertaining as any original animated film and I have a feeling Disney isn't going to be running out of ideas any time soon.