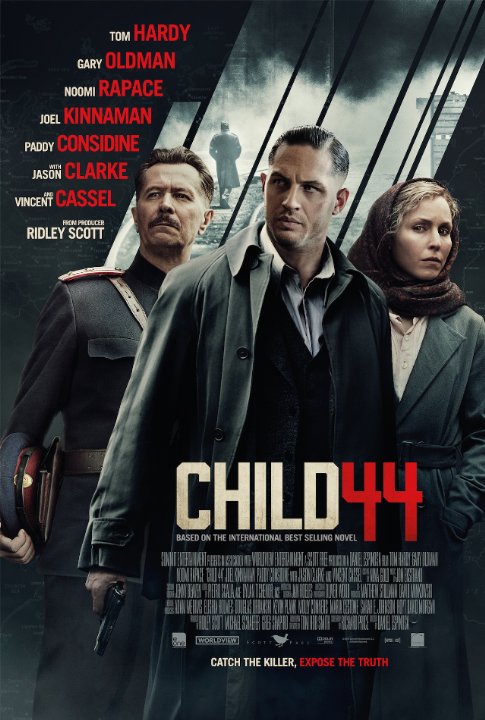 Child 44 is a dark, dour thriller set in Stalin-era Russia. If you want a feel-good movie, look elseware as starvation, poverty and persecution are all on the menu - along with a serial killer who targets young boys. While the film has the tone of Western propaganda, it still does a fine job of reminding us how far things have come - and yet how little things have truly changed.

Based partly on the true story of Russian serial killer Andrei Chikatilo (though set in an entirely different time period). The film follows Russian MGB agent Leo Demidov (Tom Hardy) as he rises through the ranks only to find himself marginalized and barely avoiding the Gulag when his ideas clash with the Communist ideals. Along for the ride is his wife, Raisa (Noomi Rapace), a weaselly coward, Vasili (Joel Kinnaman) and a taciturn by-the-books officer who eventually comes to see his point-of-view (Gary Oldman). Of course, we also have our good doctor who moonlights as a the killer (Paddy Considine). The cast is rounded out by the likes of Jason Clarke, Fares Fares, Vincent Cassel and Charles Dance.

Despite the talent, Child 44 takes too long to get to the point with too many subplots and too little thrills for a movie billed as a thriller. There are random fight scenes, lots of scowling, people hauled away by secret police, marital discord and questionable Russian accents. The fact that a good number of the actors are Swedish (as well as director Daniel Espinosa) may or may not have helped things. The fact is, Child 44 is presented as a historical piece, but muddles the waters so much it loses its impact. Yes, there is a good story here, but it gets buried by mounds of pointless exposition and constant paranoia of the Communist state.

It's too bad they couldn't just focus on the man vs. killer plot - because when they do focus on that, the movie is actually pretty good. The cat-and-mouse chase is what I wanted to see more of - and, yes, I realize this was a turbulent time where many were surely persecuted, but trotting out these tropes doesn't help the story along. The fact things crawl along at a near glacial pace at times doesn't help matters much.

I wanted to like this film more than I did - it has a solid core and an excellent cast but just tries too hard and fails to deliver more than an average experience.