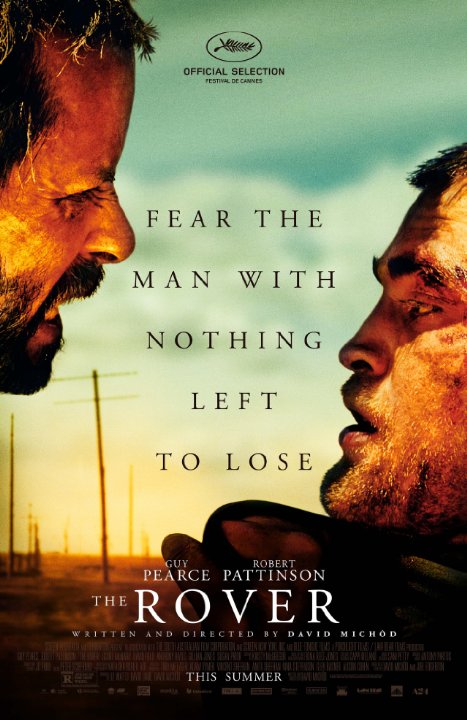 The Rover takes equal parts The Road and Mad Max in providing a post-apocalyptic tale that is both bleak and uncompromising. We aren't told what happens - only that the world has suffered from some economic collapse. Eric (Guy Pearce) finds his car taken by a trio of criminals Henry, Caleb and Archie (Scoot McNairy, Tawanda Manyimo and David Field) and immediately sets about getting his one final possession back. It doesn't work out like he wants - and finds himself knocked out - but he won't give up that easily.

Soon he comes across a wounded man, Rey (a stubbly Robert Pattinson) and when he learns he is the brother of one of the men he is after, takes him along in order to find the men and get his car back. The Rover is punctuated by sudden acts of violence - a lot of sudden gunshots and firefights in between long shots of barren outback and dusty roads. This isn't exactly a film where action is the main point - far from it, but when these times do come, it feels very real.

There aren't a lot of characters to go around - Pearce plays the strong, silent type - he doesn't say much and when he does speak, it feels like the weight of the world is behind it - and his gaze - I think he could stare down a grizzly bear the way he just eyes you. He is very much intense, and though I don't feel his character exactly has much of an arc - he doesn't need to change much - the world has already changed him.

Meanwhile, Pattinson shows a very different side from the Twilight role I associate with him. Left for dead in the beginning, he forms a reluctant bond with Pearce - and both wind up saving each other from a military organization that seems to be just as bad as the outlaws roaming the roads. They meet a few people along the way - a grandmother peddling sex, a woman who works as a doctor while also being saddled with many pets left behind and the aforementioned soldiers. But the journey isn't just about who you meet along the way, but where end that journey. The ending is just as bleak and uncompromising as the landscape - and not a happy ending, either.

The Rover is a blunt and brutal vision of a dark future. While a bit stark, it gets by thanks to the characters and the great cinematography that captures the harsh terrain. If you like post-apocalyptic films - this is a slow-moving but interesting take on the genre.