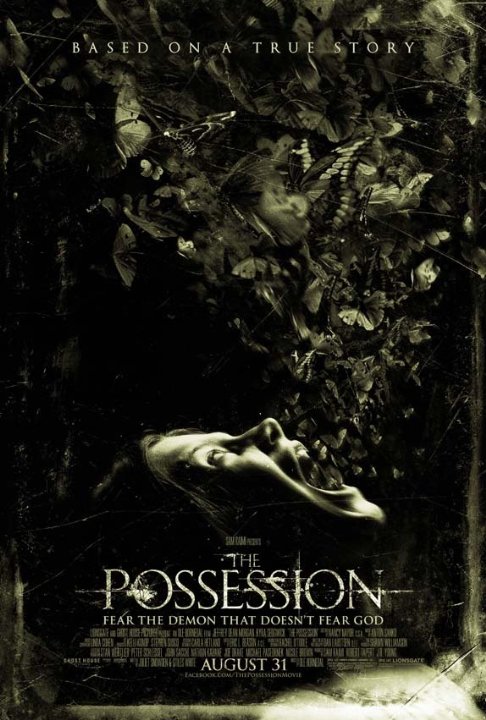 While the term "based on a true story" may have been used in a very loose sense, The Possession manages to put a nice spin on the classic demonic possession story.

The story follows the separated couple of Clyde (Jeffrey Dean Morgan) and Stephanie (Kyra Sedgwick) and their two daughters Em (Natasha Calis) and Hannah (Madison Davenport). The two split custody of the girls - Clyde is also a basketball coach of some renown and it was his scheduling (and lack of family time) that led to the couple separating. On one of their visits, Clyde shows off his new house (in a development that has yet to be too developed) and they stop at an estate sale. Em is drawn to a mysterious box that contains writing, but no apparent means of opening. Earlier in the film we are shown the former owner who looks like she wants to destroy this box, but instead is tossed about by a mysterious force ending up in a near full-body cast.

As an aside - if you ever come into possession of a box that has no apparent means of opening it, perhaps you should remember the lesson about curiosity and what it did to the cat. Em, instead, eventually finds a hidden switch that opens the box and is soon putting on a ring, talking to a "new friend" and then getting extremely emo by dressing in dark, plain clothes and giving anyone the evil eye who looks at her box the wrong way. That includes her father, who, despite being stabbed in the hand with a fork and finding an entire room swarming with moths, doesn't get the hind soon enough that there may be something strange about this yard sale find.

By the time he discovers the nature of the "Dibbuk box" - in Jewish folklore such a box was meant to hold a malicious spirit - and, of course, such a spirit feeds off innocence - hence the daughter's transformation. Clyde seeks help from a Hasidic sect but other than some bad news, he only finds help though Tzadok (Matisyahu) - a somewhat rogue member of the sect. A ritual must be performed, but, of course, there is danger.

What I liked about The Possession was that the characters felt entirely real. The first part of the film actually focuses on family matter before getting all weird and supernatural. The two girls act like typical girls - the parents like typically somewhat estranged parents. It's very natural. Some may find this setup a bit dull, but I like the dynamic that played out. In fact, one of the best scenes in the movie is when Clyde, finally fed up with the way her daughter has been acting, throws the box away and Em confronts him and is slapped by an unseen force, leading to allegations of abuse - it's not a place a typical horror movie would go to.

The supernatural elements had some interesting aspects. The most effective were the physical manifestations - eyes rolling in wrong directions, a finger popping out of a throat, strange motion under the skin - it's all very creepy and at times even disturbing. The best scene for pure horror is when Stephanie's "friend" Brett (Grant Show) - who is also a dentist, confronts Em and has to deal with the fallout. Let's just say it's no accident that what happens to the dentist involves teeth - and it might give you nightmares.

I was hoping for a bit more in the climax at the end. The who ritual things was a bit overdone and the twist at the end was more eye-rolling than inventive. Also, if you read up (or simply watch the short documentary included with the Blu-Ray) about the actual Dibbuk Box - you'll see the filmmakers took quite a few liberties with the original story. I'm not saying that certain elements about the box aren't strange - but nothing quite on the level of what the film suggests. That being said, it's still strange that such an item exists, but I'm glad I don't own the thing (though my roommate claims he wants to get me one just to see what I'd do with it - and also he doesn't want to spend more than $50.... good luck with that, buddy!).

The film has very familiar elements, but, for those looking for something beyond the dearth of "found footage" movies floating out and about, this is a decent choice. It's not going to revolutionize horror, but the put a good spin on a classic tale.