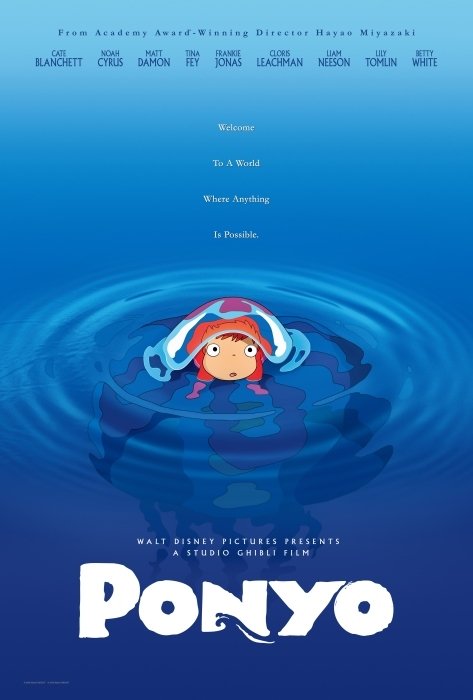 Ponyo on the Cliff ( Gake no ue no Ponyo )

I have yet to be disappointed by Hayao Miyazaki and Studio Ghibli. Once again Miyazaki brings his vision to life and the results are no less than amazing. Using a pastel palette that jumps to life and a story so pure and innocent is will soften even the most hardened and jaded of hearts, Ponyo mixes Spirited Away with Totoro and hits every note in stride.

Much as Spirited Away was a take on Alice in Wonderland, so Ponyo is a take on the classic Little Mermaid. In this case a goldfish princess slips away from her wizard father and rides a jellyfish to the human world. A five-year old Sosuke finds her caught in a jar and saves her. After some cute adventures, Ponyo is returned home but her taste of humanity (literally) has given her the power to become human - not without some consequences. But it is ultimately the innocent love between Ponyo and Sosuke that will determine the outcome - and it does make the heart melt.

As with earlier Studio Ghibli releases, the English voice cast is top-tier. Although I usually prefer the subs, Disney is always on top of their game. Noah Lindsey Cyrus and Frankie Jonas (younger siblings of Miley and the Jonas Bros.) bring a wide-eyed innocence to their roles. It's cute without being sappy, and always filled with wonder. The adult cast is just as good - Liam Neeson and Cate Blanchett bring the gravatis playing Ponyo's parents - Neeson is the human-hating, ocean-dwelling wizard who bemoans mankind for the destruction of his world (once again Miyazaki isn't afraid to play the environmental card) and Blanchett is the beautiful, powerful yet fragile Gran Mamare.

Tina Fey is Sosuke's mom, a working woman with a big heart - her driving leaves something to be desired. Matt Damon is pretty much a cameo as Sosuke's ship-captain father, but it worked. Rounding out the cast is a trio of retired women played to perfection by Betty White, Lily Tomlin and Cloris Leachman.

Even thought this is clearly aimed at the younger crowd, as the main character is only five, adults will have no problem sitting through this one. The visuals alone put any 3D nonsense to shame and give recent Pixar films a run for their money despite being 100% hand-drawn. The sheer amount of ocean life - ancient cephalopods or not - that is present shows how much work went into the animation.

If there are any quibbles, it has to do with the cavalier and carefree attitude of adults who don't seem to mind having a five-year old pilot his own tiny boat int he midst of a major disaster. It seems a bit reckless and verges on child neglect. But then this is a fantasy world, so you know no harm is going to come to the intrepid explorers. That and the way too pop-like ending credits song. The credit animation is astounding, the song (and remix) sounds like the Mighty Mouse theme song mixed with Red Bull and Pixie Sticks.

Those who think that CGI and computers now rule the world of animation should not forget Miyazaki. I continue to be enchanted and drawn in by everything his hand touches. Ponyo is no exception.