MovieMike's Movie Review of The Expendables 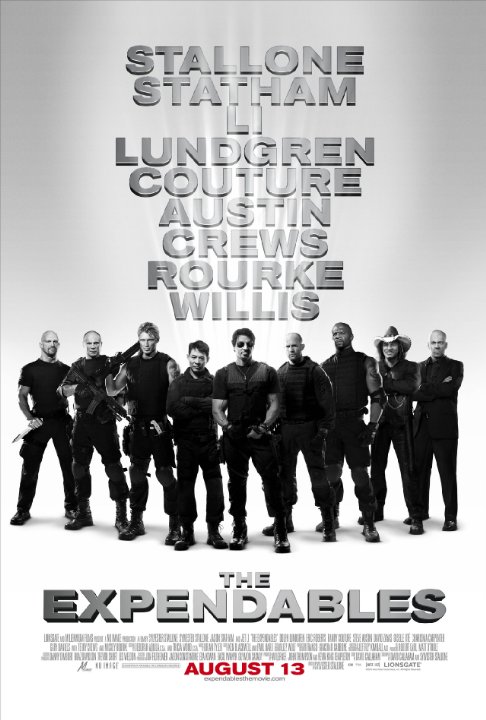 When Giselle ItiÃ©âs character, Sandra, says to Stallone âHow did you come to be here?â - I was asking myself the same question. I can be a sucker for a good action picture and given how stuffed the cast list was for this movie, I was betting for something between decent and awesome. Boy, was I wrong. âGuns of Navaroneâ, this wasnât. It isnât even in the same league as other more recent action pictures like âMax Maxâ or âDie Hardâ. Oh, and that list of past action stars? Itâs a bit misleading. Messrs Schwarzenegger, and Willis put in all-too brief cameo appearances, and Mickey Rourke is primarily used as window dressing.

To be sure, âThe Expendablesâ has it all, bad-good guys, good-bad guys, and even bad-bad guys. Confused yet? If not, the story will make sure you are. This is Stallone project all the way around, having shared in writing duties, directing, and (ahem) playing the lead character, Barney Ross. Iâve stated before that there are very few individuals with the capacity to star AND direct, but I think Sylvester is kidding himself here. âRockyâ was great, but lighting rarely strikes twice. There are a few witty lines, and I still enjoy the way Statham can dish out punishment, but with class. But even if you accept the notion that an action picture can get by without a real script, it still has to make a little sense. Case in point â how does a rear window of a pick-up get shot up from behind and not have any damage to the windshield? Câmon Sly, these are the basics!

The charactersâ names are also a bit of a tip off: Ying Yang (Jet Li), Lee Christmas (Jason Statham), Toll Road (Randy Couture), Paine (Steve Austin) â the list goes on, but you get the drift. Itâs pretty sad when the real âstarâ of this picture turns out to be an automatic shotgun that can make several hundred pounds of hamburger a minute. Eric Roberts puts in lengthy appearance as drug lord wanna-be, with Steve Austin as his main muscle. At 103 minutes, âThe Expendablesâ isnât much more than a series of chases, fights, explosions, and similar mayhem. Everything is predictable; the violence is way over the top; and the ending a disappointment.

I canât believe this film did $17 Million for its first weekend, but I guess against a vampire-send-up (âVampires Suckâ), and a dyed-in-the-wool chick-flick (âEat, Pray, Loveâ), there isnât much competition. If, like a moth to a flame, you are drawn to this one, donât blame me if you feel burned after!