CarnivorousCouch's Movie Review of A Most Violent Year 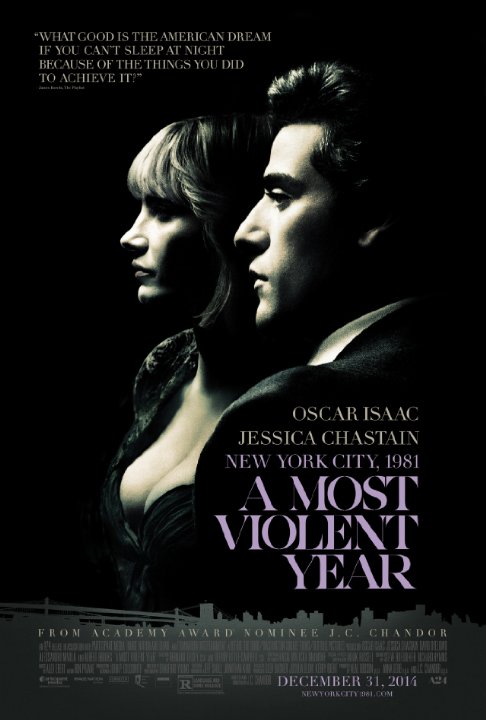 A Most Violent Year

This is the kind of period piece I love. The kind where the detail is meticulously done, but where the period isn't where the movie begins and ends. Chandor (and mighty Bradford Young's camerawork) perfectly create grimy 1980s New York and then actually do something with it, telling a tale of challenged integrity that would make Sidney Lumet proud. Oscar Isaac continues to show that he may be the best actor of his generation when all is said and done. Click on the link below to read the review on the Carnivorous Couch website, where you can see stills of all that beautiful/ugly dilapidation.

Only three films into his career, young J.C. Chandor is the quintessential wunderkind director. Of any director working today, he is perhaps the least easy to pigeon-hole, as not one of his films is stylistically comparable to the other. But each one points to his knack for peering inside very specific universes, while using those closed settings to explore broader social issues. If pressed to come up with a theme for his work (and, God knows, he could shake this theme off with the next picture and leave us all completely at a loss to contain him!), I think he is curious about what it means for human beings to live in a world built on goods and services, on economies, on business. Margin Call, his most direct film, was a rich ensemble drama about a brokerage firm on the eve of the financial collapse and the elaborate hierarchy of people trying to make sense of their ethical and professional responsibilities to the company, the public, and themselves. Last yearâs All Is Lost, a near-silent look at a shipwreck at sea, used one manâs survival ordeal to suggest a world where individuals shout to be heard over the automated whir of sterile commerce. With his third film, A Most Violent Year, Chandor continues to be interested in the omnipresence of money and professional survival in our lives and the corrupting influence that can have on even the most morally steadfast of us. It is interested in how a world built on business dictates the morality of those who take part in it. To be moral in such a world is not to operate at some higher, God-given level of honor, but to simply obey herd ethics. There is no golden moral standard, simply Standards and Practices. And sometimes it is inadvisable to even follow those to the letter.

As its title implies, A Most Violent Year is a film set in a very specific time: the year 1981. The setting is New York City in its grimiest, seediest state, blanketed in a layer of dirt, smog, and dilapidation. 1981 was one of the most turbulent years in the Cityâs history, with over 120,000 robberies and over 2,100 murders. The details of this violence are not the filmâs focus, only its milieu, as much a part of the setting as the trash on the streets and the smog hanging over the Hudson. This is the world where Abel Morales (a beautifully observed turn by Oscar Isaac) and his wife, Anna (a spirited Jessica Chastain), must make their way. The two of them run a heating oil business that used to belong to Annaâs father, a gangster of some renown. Since purchasing it from his father-in-law, Abel has taken every effort to ensure that his business expands without falling to the lower ethical standards of his competitors. However, in spite of his doggedly decent nature and his insistence on abiding by the law, the heating oil business has come under investigation by the New York City District Attorneyâs Office (the investigator is played in another good performance by Selmaâs David Oyelowo). This legal quagmire comes at a horrible time, because Abel has finally managed to make an offer on a waterfront property that will be crucial to the continued success of his business. The old Hebrew family who is selling it have given him 30 days to come up with the funding and close the deal, or they will keep the half of the money he has already given them. The legal investigation is affecting business and the situation is further exacerbated by the Cityâs crime wave, which subjects one of his drivers to a violent hijacking. The union leader starts demanding that all drivers carry firearms. Abel resists the suggestion, but the injured, traumatized driver chooses to return to work with a weapon anyway, and subjects the company to further liability. Violent criminals with mysterious intentions come looking around the family house, and, in the morning, Anna finds a loaded gun by the front door. With legal trouble brewing on all sides, the bank with whom Abel has spent years building trust retracts more than a half a million dollars in funding, leaving Abel just two days to find the money from some other source.

It all sounds fairly frantic, but the tone of the piece is that of a somber, simmering, evocative character study. It might even better to say that it is a study of character; what it means to have it, how difficult it is to cling to it, and what value it still has in a ruthless, market-driven world. Abel is a character of remarkable decency and gumption, and A Most Violent Year is the story of the world, in all its avarice and corruption, transacting with him for his principles. As Anna Morales, Jessica Chastain provides Abel with a source of unwavering support, but also acts as a foil to his somewhat oblivious sanctimoniousness. As a man, Abel may adhere to a strict moral code, but the film makes it clear that his business owes a good deal of its success to being less morally defined. The film has many interesting ideas about what it means to do business with the world, and one of the most intriguing may be that business thrives on corruption and moral fortitude singing together in harmony. Business demands a fresh, honest face on the newsletter, and a dirty, ink-stained pair of hands cooking things in the back room. Abel believes in a world where success requires nothing more than grit, intelligence, and courage of oneâs virtuous convictions. Those around him, such as his wife and his lawyer, know it is best to let him persist in this belief. They also know better than to let him steer the ship without some subtle, not entirely ethical course correction.

A Most Violent Year is a detailed, finely crafted portrait of a specific time, but it is also a film of many times, and a film that speaks very pointedly to our own times. I do not yet know if this will make the film timeless. I just know that Chandor and his team have made an allegory and a tone poem that luxuriates in nostalgia without once making it feel like window dressing, and that is a very impressive feat indeed. The team is full of talented players doing commendable work, from Alex Ebertâs dignified, lonesome synth score, to John P. Goldsmithâs pitch-perfect production design, to a great ensemble giving subtly energized performances. However, more than anything, A Most Violent Year is a collaboration between three focused, confident, highly intelligent young men, each at the beginning of potentially legendary careers. The first is the almost hyperactively smart J.C. Chandor, who came out of nowhere with 2011âs Margin Call and does not show any sign of hesitating. He has a literate ensemble morality play about Wall Street, a wordless maritime survival action parable, and a sinewy, allegorical period crime film under his belt. He has yet to return to the style of a previous film, and each individual film sounds and feels like its own unlikely hybrid. I can only hope he continues to be as simultaneously restless and focused. The second major talent on display in A Most Violent Year is Bradford Young, the great cinematographer who sumptuously and sensitively lit Selmaâs great, bustling cast of black actors. His camera work is absolutely indispensable to A Most Violent Yearâs period specificity and, more importantly, allowing New York City to become the great stage in a mythical poem about the nature of success and moral compromise. His use of shadow on the dirty, crumbling buildings of the city capture the paranoia and tension of trying to walk a narrow path in a crooked time. But his beautiful, golden lighting of the sky and distant cityscape also evoke the same New York City that called so many immigrants like Abel to find their destinies there. Almost every frame is a reminder of the war of light and dark taking place against the backdrop of this banal business transaction. Finally, Oscar Isaac adds another observant, dynamic, perfectly modulated performance to his oeuvre. It can proudly stand with his surly, self-destructive, and effortlessly hilarious lead turn in last yearâs Inside Llewyn Davis. Like Tom Hardyâs Ivan Locke, Isaac makes Abel Morales a portrait of essential decency that is riveting and soulful, rather than pious and dull. Every righteous decision Abel makes renders him more vulnerable and every mercenary one he makes takes a little piece of his soul. Isaac makes the painstaking process of making those hard choices feel as existentially exhausting as it should.

While I was watching the film for a second time, my girlfriend, Tessa, came in halfway through and said that it looked like I was watching a gangster film. To a certain extent she was right. A Most Violent Year is filled with violent scuffles, unscrupulous entrepreneurs, tense conversations in dimly lit restaurants, and even the occasional burst of gunfire. Abelâs father-in-law was a gangster and Abel even considers turning to a close friend with gang ties when things look truly dire. With criminal charges pending against the company, Abelâs lawyer tells him they must talk outside to avoid incriminating themselves, and Abel is taken aback by how much it seems like something an avaricious mercenary would have to do. He never intended to be a gangster, and he does not recall taking any steps to become one. He has spent his whole life running in the direction of right. At its heart, A Most Violent Year is most probing and insightful for not strictly being a gangster film. A good description of it would sound fitting coming from a gangsterâs mouth though: âItâs just business.â It is the story of a man trying to close a normal real estate offer at a particularly violent and unprincipled time and place. It is the story of a very honest, steady, and virtuous man, living in a world that preys upon those same qualities, who must decide how much of his better angels he is willing to part with in exchange for some modest measure of success. All the world is a bargaining table. Sooner or later, we all sit down and make a deal.