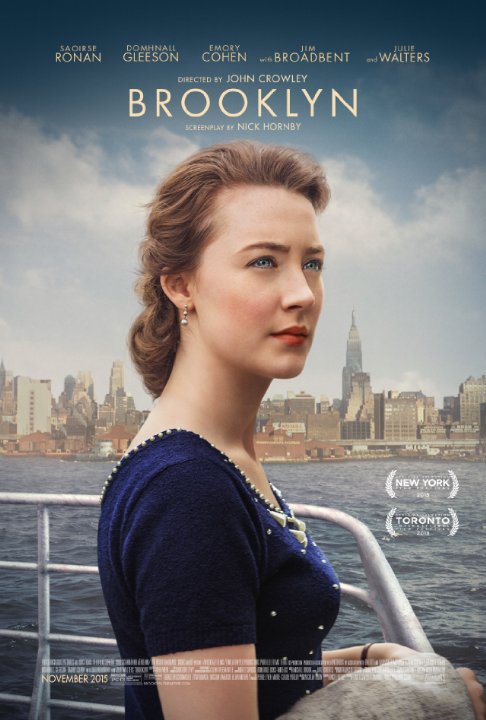 "Would you like to dance?
Are you here with that guy? The one who was teaching you to dance?
No.
So would you dance with me?
I'm not sure he taught me anything.
Doesn't matter. The secret is to look as though you know what you're doing.
Ah. I wish someone had told me that years ago."

No, I'm not really a big fan of romantic movies. Such movies that'll make the female audience melt and whimper in a handkerchief out of sympathy with the main character. And no, I'm not an insensitive lump of testosterone who only likes to watch action packed, macho movies. But yeah, I usually eschew this type of movies. And yet I wanted to see this movie. Not because I made a mistake while buying paper tissues and now I'm buried under it. And not because I'm in an emotional slump and felt the urge to watch a sad movie with a trembling lower lip and moist eyes. The only reason I really wanted to see this movie is because of Saoirse Ronan. In my eyes she's a revelation in Hollywood. A young, fresh and certainly not unattractive appearance. She breaths new life into Hollywood-land. And in addition to these physical characteristics I also have a deep admiration for her quirky choices she makes among the film roles offered to her.

Ronan is the pulsating heart of this film. She requires our undivided attention during the whole film as the young Irish girl Eilis Lacey, who gets a chance to start a new life in the US. All by herself she travels to this far country, ignorant what awaits her. She's leaving her mother and sister behind and before she knows it she's torn by homesickness. Even her job as a saleswoman at Bartocci and accounting courses can't help. This emotion keeps her in a grip. Until she meets Tony (Emory Cohen), a shy young Italian, at a dance and she slowly transforms from an introverted, simple Irish countryside girl into a typical American city girl who wears colorful dresses and discovers makeup. Her attitude and confidence change drastically. Compare that shy, lost girl at Customs with the resolute young woman watching at a valley along with Tony who reveals his future plans. An independent, decisive woman with a strict, determined look and her hands in her side, gazing at the horizon.

But it's not only Saoirse Ronan who shines in this film. Also the supporting cast is masterfully chosen and fits perfectly into the overall concept. Jane Brennan as Ellis's mother, a taciturn woman who accepts her fate and acts as if she has no emotions. Fiona Glascott as the sister Rose. Brid Brennan who plays the role of the haughty nosy Miss Kelly and surprisingly she plays an important role in the final decision of Eilis. Julie Walters as the owner of the guest house who needs to keep two light-headed boarders in line all the time. Domhnall "About time" Gleeson is an Irish village boy who makes an attempt to convince Eilis to stay in Ireland. And of course Emory Cohen and his Italian family. A confident young man who slowly tries to win the young Irish girl's heart.

It's not the obvious part that moved me. Probably the female audience will shed a tear during the final scene. But I myself was especially touched when a homeless person at a dinner, organized by the priest (Jim Broadbent) who helped Eilis around in Brooklyn, sang a Gaelic song. So pure, so sincere and so imbued with nostalgia. Catchy and intense at the same time. But especially the acting of Ronan is wonderful. She's so explicitly present in this film. Her big steel-blue eyes, her modesty and her fragile personality. She shows what deep emotions she's going through, just by using a serene expression. A performance that stands out from any of her previous performances. The heartbreaking choice she has to make between dull, drizzly Ireland and exciting, vibrant America is perfectly portrayed by her. For me, the Oscar for "Best Actress" is already reserved.

This movie is a really good reminder about immigration in our country back in the 1950s and a good cultural reminder of what is going on today. But, the choices the main character makes definitely leaves a lot to debate.