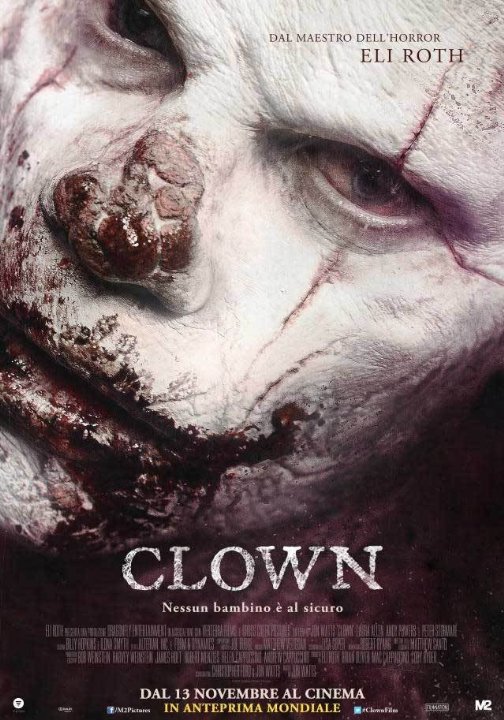 Perhaps you have nostalgic memories about attending a circus when you were young and you had fun while watching the clowns act. My advice. Don't watch "Clown" because these idyllic reveries won't be the same anymore. And also, were you scared of clowns and thought these were horrible impersonations, you definitely shouldn't watch. I guarantee you the phobia will grow out into clownish proportions. For me who has no emotional connection with clowns and enjoys a ghastly horror, it's mandatory to watch this movie. Just one thing worth knowing. If you're wondering which movie is shown in one particular trailer and the thought of plagiarism comes to mind, I can tell you that this is a fake trailer created by director Jon Watts. The moment Eli Roth saw this trailer, he couldn't restrain his enthusiasm and the only thing he wanted to do was to turn it into a feature film with himself as a producer. Although Kent looks rather ordinary as a clown in the initial stage, the final transformation ensures a grim and frightening character. He can join the club of creepy clowns like those in the movies IT (Stephen King) and All Hallow's Eve (A trashy tale, but with an ultra-scary clown as main character). I am convinced that there exist other horror movies with a creepy clown in the lead.

The trouble starts when Kent (Andy Powers), a real estate agent, is forced to replace the clown who was booked to perform at the birthday party of his son Jack (Christian Distefano) and whose schedule got mixed up a bit. Luckily he discovers a complete clown outfit in the house of a client, in a chest that is chained to the wall (what a coincidence). Kent appears at home dressed as the clown Dummo and ensures a spectacular birthday party for his son. The next morning, however, he comes to the conclusion that he can't take off the costume: it seems to be merged with his own human skin, the wig is suddenly his natural hair and he can't get rid of the clowns nose despite all efforts. Ultimately he discovers that the costume is made off the skin of an evil demon, called "The Cloyne". Kent gradually transforms into a bloodthirsty Killer Clown with an insatiable appetite.

The initial idea isn't so bad, but the final result is a bit too soft in my opinion. But rest assured, there are plenty of "suggestive" thrilling moments and gore scenes, but it's never straight-in-your-face horror violence what you'll get to see. And yet I enjoyed watching this film (despite the linear storyline with a predictable ending). There are some funny moments, like the clumsy way Kent tries to get rid of the suit and the sublime decapitation mechanism Kent designs, which provides a very different outcome. There are also some subtle fine details elaborated, showing that the makers have looked further than their (red?) nose. Just as Derek in "Afflicted", Kent is unable to take his own life. The only thing that was added to this fact was the confetti. Quite funny and a proof that creativity was indeed present.

There are some gruesome scenes (for experienced horror fanatics still a bit soft) and the atmosphere is sometimes really unnerving. The part that takes place in the indoor playground was extremely thrilling and creepy. You can be sure that you'll be looking at a ball pool in a different way from now on. For me this was the most magnificent moment of the entire movie with claustrophobic images in a labyrinth of corridors, shown in an explosion of colors. But as mentioned before, the central theme around which everything revolves, isn't explicitly portrayed. If you want to promote a creepy and gruesome horror movie, you have to have the guts to handle this in the whole story. Now the most gruesome scenes are handled off-screen and your imagination has to provide the missing images. The inner struggle that Kent should engage with the demon, who tries to change his personality, takes up a large portion of the film. Perfectly outlined but maybe it was still a tad overemphasised. Most horror fans will say that the transformation unfolds way to slow and that they rather saw Kent appearing as a bloodthirsty killer clown much sooner.

In terms of performances, there is no one who excels or disappoints. Andy Powers (unknown to me) manages to show the creepy clown in a convincing manner and with its various facets : entertaining, sad and desperate, resisting, fighting and finally sneaking around as a maniacal killer, looking for victims to satisfy his hunger. Laura Allen plays the desperate wife Meg who (obviously) must face the ultimate confrontation with her "transformed into a not so cheerful clown" husband. Christian Distefano evolves from a clown lover to a frightened little boy who eventually throws his plush clown in the bin. Who wouldn't ? The most amusing supporting role is played by Peter Stormare as the pretty disturbed Karlsson. The Swede Stormare is such an actor who takes care of small roles in many films (The Lost World: Jurassic Park, Armageddon, Bad Boys II, Get the Gringo, The Last Stand, Hansel & Gretel: Witch Hunters ...). His contribution in this film is of greater importance.

"Clown" has its good sides and lesser sides. Unfortunately, there won't be much publicity about this film and most likely you'll only see it on DVD. The idea and the development of the theme about the clown is rather successful, but the final result is still just an average movie. I enjoyed myself while watching it, but I'll still go to a circus without any worries or fear. And I'm surely not going to run away in a panic when the clown act begins.

I bought 100 Tears on a whim when someone requested it to be added to our database. It's low budget with over-the-top gore, but if you want a movie with a scary clown, it's worth it to track down.