Stoney McStonerson's Movie Review of What We Do in the Shadows 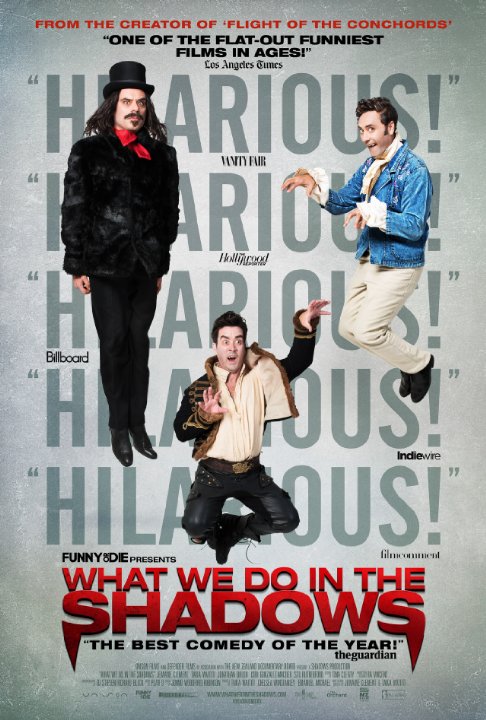 You've probably heard very little noise made about this Vampire Spoof/Parody/Mockumentary in the "Spinal Tap" mold. Starring one half of the "Flight of the Concords" who with 3 other Vampires all room together in an old Mansion ala the reality show "The Real World". It also has a roaming pack of Werewolves led by the always amusing and underrated Rhys Darby who was the Bands Manager from "Flight of the Concords". The entire Cast as well as the constantly funny script make this giddy gem the best Vampire Spoof that I've ever seen. Although there has yet to be a Grand list of this type. Love at first Bite, Dead and Loving it and Buffy the Vampire Slayer come to mind but pale in comparison. Shadows starts out with an abundance of laughs even before the opening credits start to roll as we begin to learn of each Vampire's story done as a Documentary. It doesn't sustain that level of laughs for the entire film as the Documentary Team follows the Roomies around showing their every day wants, needs and issues that arise from being one of the undead but it has many laugh out loud moments along with just as many scenes that will cause you to chuckle and smile. I just like the whole vibe and flow of this film and actually was left wanting more from these very odd but entertainingly funny characters.

If you were a fan of "Flight of the Concords" or just enjoy silly off center Comedies this may work for you.