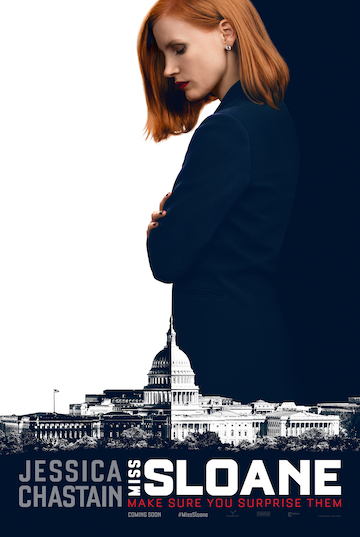 Government affairs, sexual liaisons, ethical violations and cyber-roaches all convene atop Capitol Hill in "Miss Sloane." When Elizabeth Sloane (Jessica Chastain) is recruited by a firm to champion a congressional bill expanding background checks for gun purchases, she makes the difficult decision to leave her current lobbying position at a firm which opposes the bill. In doing so, she causes a split between those lobbyists loyal to her and those whose sympathies lie with the group committed to killing the bill. In her attempt to sway senators to vote for the bill, she must weigh the cost of her personal conviction with the consequences of doing whatever it will take to be successful.

Jessica Chastain gives a forceful performance as Miss Sloane, the rock-hard lobbyist with a winner-take-all attitude. She succeeds in making a character that compulsively deceives, betrays, and crosses the line appear desirable, despite putting the lives of others in danger. Gugu Mbatha-Rawâs character, Esme Manucharian, is sobering, reminding Elizabeth Sloane of the pitfalls of valuing ambition over personal relationships.