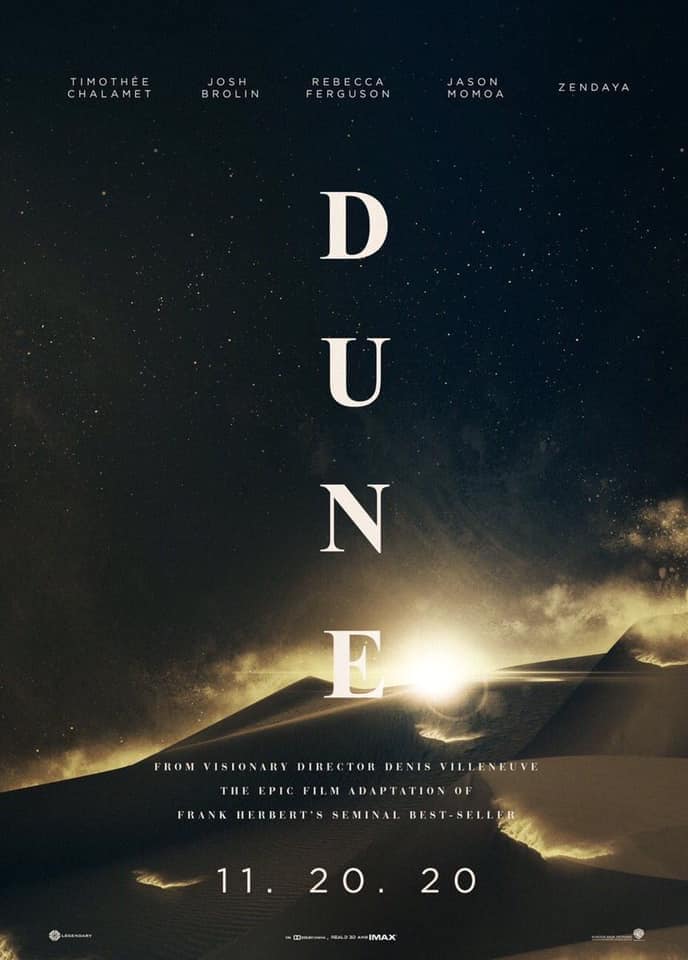 A story and world that gave birth to fantasy and Sci-Fi as we know it, as a main influence and many more for years to come. Although, I havenât seen the other adaptions of âDuneâ with either of the Lynch or TV version. So, this is my first introduction to the world and characters, and something that was once considered unadaptable has become a reality all thanks to Denis Villeneuve vision. And now I'm interested in this world and the movie leaves you wanting more.

'Dune (2021)' - man what a trip. Incredible in every sense. Just like âBlade Runner 2049â, nobody does art house blockbusters better than Denis Villeneuve. A Sci-Fi tale of philosophical richness that's loaded with grand spectacle. While I didn't see it in IMAX, but that didn't take away from the scope of it all.

No joke, but this could be our new Lord of the Rings and Star Wars.

The acting here is strong:

TimothÃ©e Chalamet has impressed me ever since his breakout role in âCall Me by Your Nameâ, so itâs not surprising that he did an excellent job in this movie as the character of Paul, the young man in royalty whose destiny can lead him in either direction. Not bad for a kid who started off showing off his X-Box controllers on YouTube. If you donât know what Iâm talking about, type into YouTube âModdedController360â and youâll see.

Oscar Isaac plays The Duke, the father of Paul, and Oscar Isaac has yet to deliver a terrible performance. There's one scene between him and Chalamet that was one of the most moving things I've seen in a Sci-Fi movie since...well, 'Arrival' and 'Blade Runner 2049'.

Rebecca Ferguson plays Lady Jessica Atreides, who is easily the heart of the movie, and it might be my favourite performance from her.

Jason Momoa plays Duncan, the ultimate Chad, whoâs a chill guy but is an absolute demon when it comes to fighting. Josh Brolin as Gurney Halleck, a cool but serious man who loyal to those close to him. Stellan SkarsgÃ¥rd scenes as Baron Vladimir Harkonnen, the bloated and slimy creature with a hunger for power and chaos, which also pays a wonderful homage to Marlon Brandoâs Colonel Walter E. Kurtz in âApocalypse Nowâ, through the visuals in every scene heâs in. Also, despite the small screen time he had, but Dave Bautista has proved that he has more range as an actor than most wrestlers who turned to acting.

Zendaya isn't in the movie that much, but I know she will be in the next movie. Her little scenes were very mystical. She appears mostly in visions from Chalametâs Paul, which people have best described those âvisionsâ as the most expensive perfume advert ever.

In terms of the visual effects and the practical work, itâs a piece of art. It helps create a sense of scope that made everything feel so big, so real and so engaging to watch. I can say all of it looked pitch perfect. But also using real locations for open spaces and made certain bits of environment like heat from the actual desert, harsh winds, soggy rainy, grass, and the breath-taking landscapes seem familiar to us in this âalien worldâ.

However, the movie does feel like a part 1 and for some people the movie feels incomplete, story wise. But then again, if it leaves you wanting more and we now know we are getting a part 2 to this story, this issue will expire when the second one comes around.