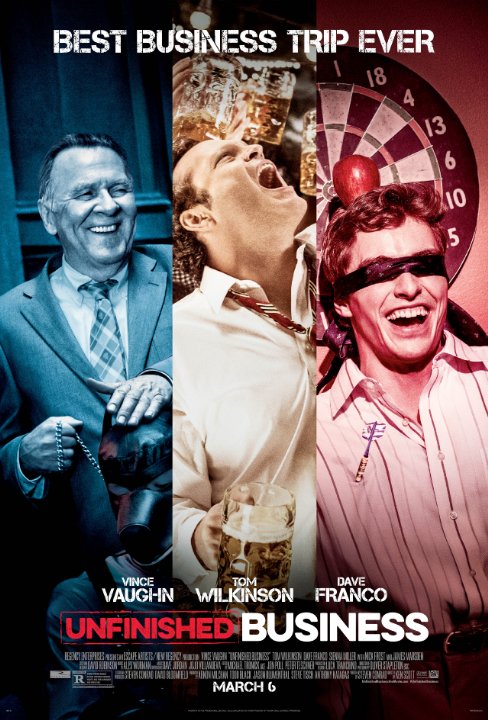 The reason why this review is late because at the first I had zone interest in this movie and what change my mind at the end is the people telling me to watch. https://www.youtube.com/watch? v=WtOPacnjxLU

The story is about a business owner and his only two employees set off on an international business trip that will culminate in the most important deal of their lives. But when his former boss shows up to steal the show, the trio will go on a cross-country European romp to try to woo their clients back, no matter how far it takes them.

As a reviewer myself I normally avoid movies like this for many good reason and one of them is the lack of effort or brains put into them, and the fact that great names actors that pulled off pretty performance in the past have to sell their soul to devil and by in a bad movie like this. Unfinished Business is the worst.

I didn't laugh once during this movie and I think it's due to the bad writing and the slap together script that probably got shout straight out of the toilet and some how made it to the big screen.

Basically my job is to tell people what to see and what to avoid like a disease. Normally I like to recommend movies that are great and people haven't heard of before, but Unfinished Business isn't one of them.

Thank god Vince Vaughn is in the next season of True Detective maybe he might pull of a great performance in that TV show, but in this...no. He played the basic Vince Vaughn in this movie. Maybe he didn't want to be there, maybe he wanted to go home or get a pay check.

Tom Wilkinson is Oscar nominated actor that clearly knows how to act, so what happened here? did somebody put a gun to his head and made him do it because when you're such beloved actor would you want to waste it by being in movies like this...I don't think so. He was wasted in this movie and I don't mean he was high or something, I mean his talent was put to waste and who knows maybe he wanted to go home or get his pay check.

Dave Franco...to be honest I don't really care about him, so...stuff him.

The only thing in this movie that I can look at and say something positive about is the fact that these many bad comedy's out there that are more horrible and more worst than this, don't get me wrong this isn't a good movie at all but comparing this to other bad comedies out there this is almost there.

Overall Unfinished Business is the perfect movie to skip this year as I bet nobody isn't going to talk about this in a couple of months time, until I get to my worst movies of the year list and yeah your going to see it again.