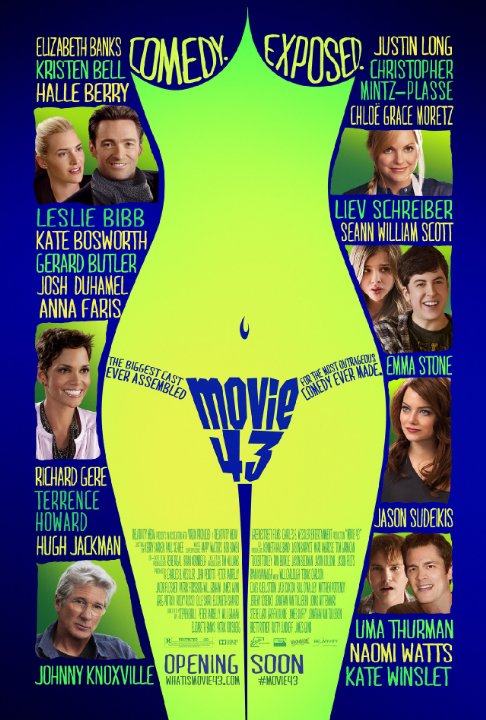 Believe me when I say that I do NOT want to talk about something that has a moral and comedic stature of a stain of excrement on the wall. But, I'm going to do it anyway.

Movie 43 is what you get when a bunch of talented people get together and have a brain malfunction.
The wonders of the universe used to be on my mind. I used to think about why oxygen existed, or human life for that matter. Now, I think about how this atrocity of a film could have ever been made.

This 'movie' has not a single redeeming feature. Everyone in this film gave their weakest effort, everyone. And it simply pains me to know that good actors actually took part in something as offensive, annoying, deceiving and morally wrong as Movie 43, the (I quote Richard Roeper) 'Citizen Kane of awful'.
I know a lot of people. I also know a lot of people who like comedies, some of them good, some bad. And that's alright, taste varies and one man's trash is another man's treasure. But if you liked Movie 43, there is something not properly functioning between the circuits in your brain.
How could you tolerate something as miserable and degrading as the sight of Hugh Jackman's balls hanging from his neck or Halle Berry squashing guacamole with her oversized breast as good comedy? How?

I seriously have zero interest in talking about this, because everyone has already panned it and pointed out every flaw. Just know: It's the next The Room. Maybe even worse. Because The Room was made through the excessive belief of an actor/director/writer, and Movie 43 was made solely so that the producers could probably buy a nice house in the Maldives.