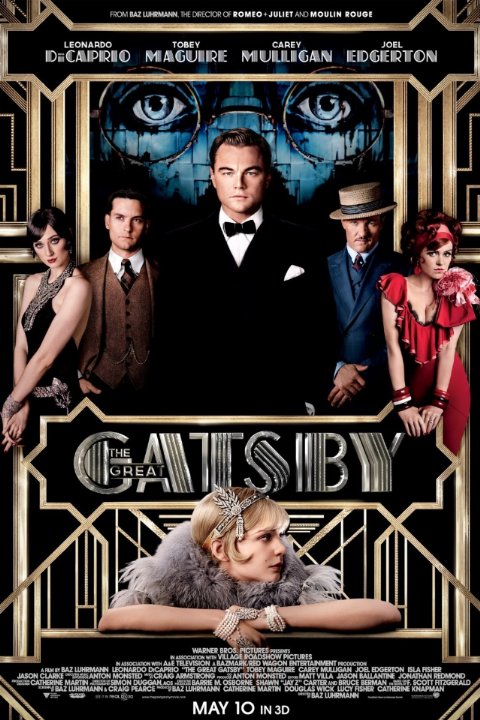 The Great Gatsby is in my eyes the perfect example of style over substance.
While it is easily Baz Luhrmann's best film, he not only creates a an environment in which reality is scarce, but a 3D Hollywood-fest, that basically screams: I'm Pretty! through its excessive over-the-top acting and surprising Jay-Z music.

Luckily, one of the better points of the film is Leo. He's my favorite actor, so there's no wonder he would light up the dark, but he came off more Oscar-willing than Oscar-worthy. Substitute 'SHUT UP SHUT UP' with 'GIVE ME AN OSCAR' and you'll see why.
Joel Edgerton however steals the show. This is a greedy, malicious ba*tard who really knows how to manipulate people. Very different from his family-man persona in Warrior. If anyone deserves Best Supporting Actor, then it's him.
Carey Mulligan was fine, she just seemed like she would shatter like a piece of glass if you touched her.

And now, the direction: I want to hit something.
This movie looks more like something a toddler would put in its mouth than a worthy adaptation of the Great American Novel.
Baz Luhrmann yet again seeks to only please his ego by overlooking what's important and stuffing so much 3D down your throat, you won't know which was is up.
The sappy cinematography didn't fit the persona of Gatsby and the characters at all.
If you thought Australia was over the top, you'll be puking rainbows here.

What makes a good film? Good acting? Good direction? Good screenplay? These filmmakers were looking in all the wrong places.
When they should've been looking for an effective way to adapt a classic, they used the coward's way out and made it 3D.
Adapting the Great American Novel is not easy, I will admit, but the inevitable reaction to The Great Gatsby 3D should not be a moan of displeasure.
I just find it unforgivable how this director portrayed one of my favorite books on screen in such a bland and modern fashion.
No atmosphere, no feelings, no empathy.