JLFM's Movie Review of Legend of the Guardians: The Owls of Ga'Hoole 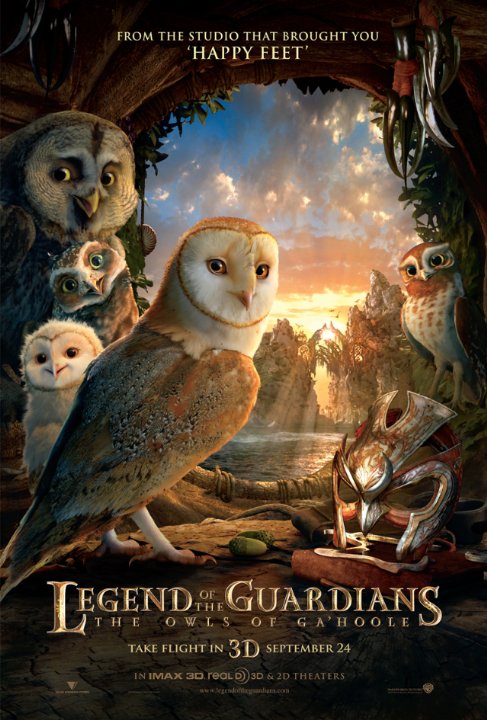 Legend of the Guardians: The Owls of Ga'Hoole

Soren, a naive and adventurous barn owl, has his life forever changed when he's kidnapped (along with his brother, Kludd) by henchmen of the Queen of the Pure Ones, Nyra. Soren manages to escape (along with another owl named Gylfie), though Kludd is deceived by Nyra and joins forces with the Pure Ones. Soren and Gylfie meet up with new friends, in hopes of stopping an evil plot concocted by the leader of the Pure Ones, Metal Beak.

Frankly, the story is nothing to write home about. Literally following every single fantasy cliche in the book, The Owls of Ga'Hoole is certainly predictable. And yet, Soren's quest is just interesting enough, and the characters are just likeable enough, that one can overlook the film's simplistic nature and can enjoy the film on its own terms.

The characters are relatively likeable (as previously mentioned). Though Soren is essentially like any other male fantasy lead (naive, hopeful, blindly heroic and almost eye-rollingly loyal), he grows on you as the movie continues. Glyfie is...well, uninteresting, but it's the supporting cast that really makes the film work. Digger is amusing and fun when he's onscreen, and Twilight is pompous and silly (and remarkably similar to Owl from the Winnie the Pooh films).

The action scenes are thrilling, and the animation dazzles. Some sequences are truly stunning, as the visuals continually show off.

One notable problem with the film is that it doesn't feel complete. This was obviously intended to be the start of a franchise, and the ending makes sure there's plenty of room for that. It's a bit bothersome to be given what appears to be only part of the finished story, but what's here is entertaining enough to make this less of an issue.

The voice talents are generally unremarkable. The standouts are limited to Helen Mirren as Nyra, and David Wenham as Digger. Barry Otto also has a funny little bit as The Echidna.

The score, composed by David Hirschfelder, is often glorious and triumphant. Heroic themes and softer melodies are spread throughout, creating a moderately satisfying score.

Though predictable, and a bit problematic in regards to pacing, The Owls of Ga'Hoole is still entertaining and at times, surprisingly gripping. It isn't especially memorable, nor particularly original, but you'd be hard-pressed to find a better film revolving entirely around owls.