JLFM's Movie Review of Pirates of the Caribbean: On Stranger Tides 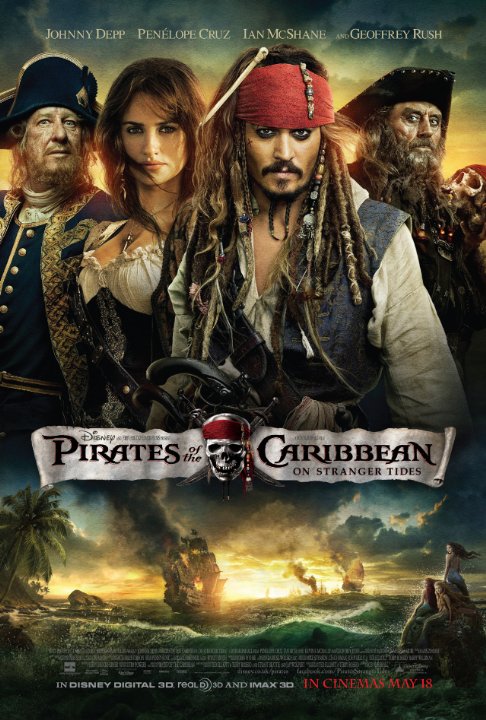 Pirates of the Caribbean: On Stranger Tides

You know what the world needs? More pirates. At least Disney thinks so. And the funny thing is; they may be on to something. Ignoring the less than enjoyable At World's End, The Pirates of the Caribbean films haven't been half bad. What was once considered a terrible and sure-to-fail idea by many has turned into a relatively fun franchise. On Stranger Tides, the fourth entry in the Pirates series, continues dishing out the mindless and entertaining joy of its predecessors, if slightly less consistently than in the first two films.

Summarized as simply as possible, On Stranger Tides continues the misadventures of Pirate Captain Jack Sparrow. This time, Jack is on the search for the Fountain of Youth. Things are, of course, complicated, when Jack runs across an old love named Angelica who semi-kidnaps Jack and steals him aboard the Queen Anne's Revenge, which is commanded by Captain Blackbeard. To further complicate things, they aren't the only ones that want the Fountain of Youth. Barbossa is back, as well as Gibs, but the main focus is on Jack and Angelica.

On Stranger Tides does everything one could reasonably expect in a film like this. We get plenty of action scenes- that are great fun in the moment, but not easily remembered when the film is over- amusing one liners, many of which come from Jack Sparrow, and some impressive special effects, though none of which seemed quite as impressive as those in the previous entries.

It's nice to see old friends again, though I have to add, we don't get to see ALL of our old friends. Will Turner and Elizabeth Swann are no where to be found, though they were mostly uninteresting characters anyway. More importantly, Jack's entire crew is gone, with the exception of Mr. Gibs. Still, On Stranger Tides is crowded enough as it is, and does mostly fine without them.

The new characters aren't particularly great. Most of them are forgettable, others are flawed. Angelica is a mostly bland and confused character. Her character traits contradict each other as the film goes on, and this is not limited to her love-hate relationship with Jack.

Blackbeard as the villain is all right, but he's not as amusing as Barbossa, nor as menacing as Davy Jones. The film seems to be trying to meet halfway with Blackbeard, but it doesn't really work.

Still, no one sees Pirates of the Caribbean for new characters. We just want to see our old friends, and be assured; the characters that do return get plenty of screen time. Jack Sparrow gets his biggest role since the original, which is especially nice since he was all but forgotten in At World's End. Barbossa gets his share of scenes, and Mr. Gibs gets a surprising amount of screen time, though his character seems conveniently forgotten about at many intervals.

On Stranger Tides is fun- so long as you turn off your brain- but there are a number of serious moments that just kills the pacing. To avoid potential spoilers, I won't name the primary serious bits, but let's just say that in a silly film like this, those moments don't belong here.

There's also a bizarre romance between a mermaid and a character named Philip Swift, which makes up one of the biggest "What the heck?!" factors in the Pirates series (which is quite impressive when you consider some of the confounding-ly weird moments in the previous films).

The acting is still great. Everyone seems to be having a good time, and that adds a lot of energy to everyone's performance. Johnny Depp clearly relishes the role of Jack Sparrow, and the same can be said for Geoffrey Rush as Barbossa. Penelope Cruz does what she can as Angelica, but one can only do so much with a bad character. Ian McShane is solid as Blackbeard.

Like the film itself, Hans Zimmer's score is relatively mindless, but it's fun and works within the film. Aside from some guitar throughout, this is essentially identical to the other Pirates scores, but considering the effective (if not entirely original) themes in the previous scores, this isn't necessarily a bad thing.

Flawed? Yes. Silly? Yes. Stupid? You bet! And it's more than a bit unfocused. But despite all of that, On Stranger Tides works. It's not as fun as the first two films, yet it's still perfectly enjoyable, as long as you can excuse some flaws. On Stranger Tides is certainly a guilty pleasure, but a pleasure nonetheless.