JLFM's Movie Review of I Am Legend 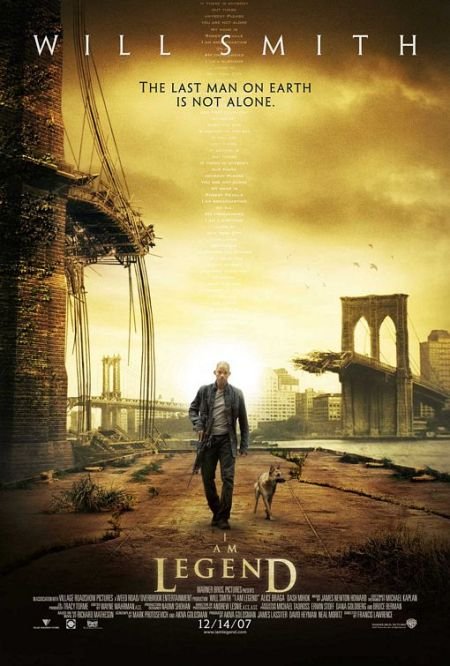 I am frequently disappointed by action films. They tend to be little more than excuses for elaborate fight and chase scenes with lots by the way of explosions and A-List actors and little by the way of plot or brains. I applaud I Am Legend for not being that kind of action film. Actually, it's quite the opposite. Fights and combat scenes are surprisingly scarce, but does that make I Am Legend dull? Far from it. I Am Legend's creepy and sometimes frightening atmosphere alone will keep you on your toes for a majority of the film's run time.

Robert Neville is the last person left on earth. Everyone else has been completely wiped out by an awful virus. Oh, there are people that weren't killed by the virus, such as Neville, but they've all turned into zombies, and their only remaining goal is to finish all human beings left on the earth. And the zombies are almost finished too. With only his dog, Sam for company, Neville has to take on the entire population of zombies, while also trying to find a cure to reverse the virus.

One of I Am Legend's biggest downsides is that almost nothing happens in the first 70 minutes that progresses the story. We are given plot details through flashbacks, and we see Neville hunt deer. There are a couple of interesting scenes, but almost nothing happens that helps the story advance forward in any way. Despite this, I Am Legend is still very entertaining. Part of this comes from Will Smith's effective performance. A lot of this, however, comes from the atmosphere which is creepy and frightening throughout. There's no one left on the entire planet, so the quietness is a little unnerving, and because we know that there are zombies lurking, I Am Legend keeps you tense and on the edge of your seat for a vast duration of the film. It's certainly difficult to make 70 minutes of nothing feel fast-paced and suspenseful, but I Am Legend does it.

Despite a mostly uneventful first 70 minutes, there is one particularly thrilling scene in which Neville's dog runs into a building that serves as the zombie's primary hiding, and Neville goes after him. The building is dark, and because the zombies have not been seen yet at this point in the film, it is extremely creepy and exciting.

After the first 70 minutes, I Am Legend finally gets some plot development going. One or two somewhat major occurrences happen here, but I won't spoil anything here.

Where this film truly gets it's recommendation is in the last 20 minutes. At this point, I Am Legend is firing at all cylinders, giving everything it's got. With a majorly thrilling ending involving the entire population of zombies, I Am Legend makes up for it's uneventful beginning.

The special effects throughout are serviceable, but hardly jaw-dropping. It's usually obvious when we're looking at a CG creation, or the real deal.

Will Smith (as Robert Neville) is one of the reasons why I Am Legend works. As one of the only characters in the film that isn't a zombie, Will Smith has to carry the film on his shoulders, and he does so admirably. We can tell he's going a little nuts, as he frequently talks to his dog and the various store mannequins, and Will Smith's performance makes us believe that. This is a role that could have easily been quite laughable, instead, it's one of the primary strengths of the film.

The score is composed by James Newton Howard. At least, that score there is. A majority of the film has no music, and when there is music, it's usually quiet and forgettable. Howard fails to do anything interesting with I Am Legend. To be honest though, I Am Legend could've still used more music, even the sub-par kind, because some of the "boo!" moments lacked the umph it needed, and some unexpected trumpet blares could've fixed that.

I Am Legend doesn't answer all the big questions. There's so much left unexplained, that it's sure to irritate some. Still, I Am Legend provides a thoroughly creepy experience that's worth the price of admission for the atmosphere alone. Will Smith's performance, and some truly exciting zombie take-down scenes are just the icing on the cake.