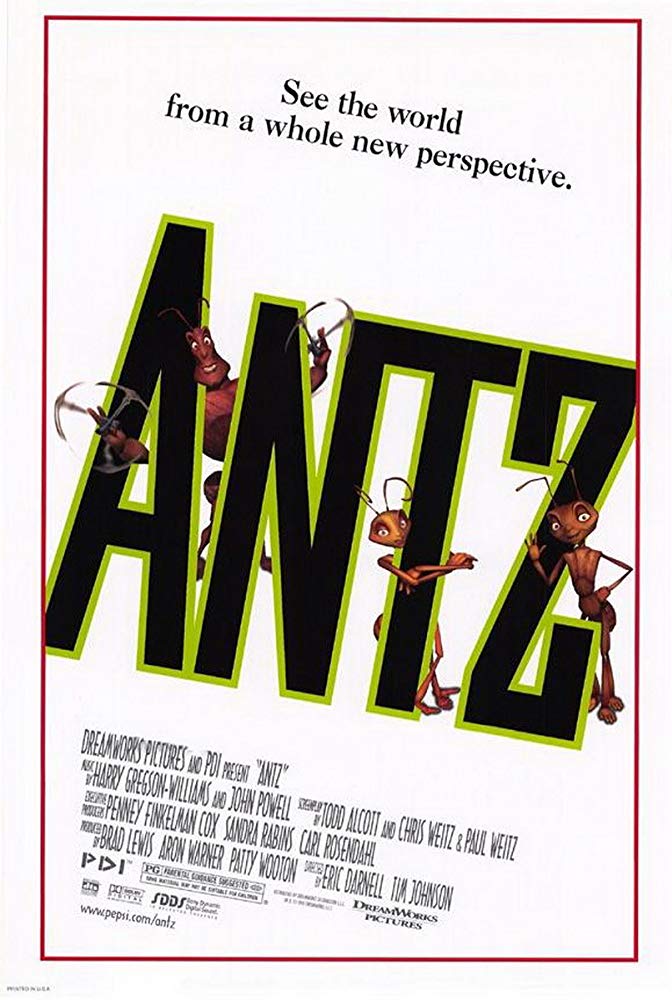 For the first 10 minutes, Antz made me smile, sometimes laugh, and for the most part, was quite enjoyable. My doubts towards the usually mediocre Dreamworks had faded; but only for a little bit. The quality dropped just a wee bit after the first 10 minutes, but I was still enjoying myself. The film holds up for another 20 minutes, and then it's rarely amusing again.

The main character, Z, is tired of having decisions made for him. He doesn't want to be a worker, and he's sick of being forced to things he doesn't want to do. Through a crazy chain of events, Z becomes a war hero, is accused for kidnapping Princess Bala, and ultimately, begins his journey to Insectopia, where he can make his own decisions, and live in paradise.

After the first 30 minutes, Antz decides to movie the story in a completely different direction and what could've been an entertaining film turned into another mediocre Dreamworks entry.

Part of the reason Antz was such a disappointment were the characters. They're simply unlikeable. At the minimum Dreamworks managed to at least develop personalities for the characters (though there are several exceptions) but none of them are very likeable. Bala is a brat, Z is a bumbling idiot, and General Mandible; the film's villain, is often confusing.

Mandible has no motive for his villainy, and is ultimately forgettable for his lack of personality or originality.

Antz is the second CGI movie ever made, so I might have forgiven Dreamworks for the ugly animation. However, the first CGI film (Toy Story) had considerably better looking animation, so Antz really has no excuse.

The character designs are atrocious. You can't tell the difference between a female ant or a male ant until they talk! The design of the ants face and head look like a bad version of E.T. right down to the skin tone. It's just downright awful.

And the voice acting is also rather disappointing. The voices lack energy and a vast majority of the lines sound flat. With so many big names, I had expected more. Perhaps that's why I was so disappointed.

The score however (composed by Harry Gregson-Williams and John Powell) was incredible (especially during the beginning where there are a lot of jazzy songs). The music is perhaps the only thing that tops it's competitor film, A Bug's Life. However, there's an incredibly silly lyrical song that's played during the credits that has nothing to do with the movie and it's just awful. I don't know what Dreamworks was thinking by adding this song into the credits.

The thing that surprised me the most about Antz, though, was how non-family friendly the film was. Some scenes take place in an ant bar, some language that shouldn't be allowed in a children's film, and a LOT of violence. I scarcely ever see films with such a high body count. Hundreds if not thousands of ants are killed during a war, one of which was decapitated. One bug ends up falling to his doom and we see the impact. For a teens on up film, this may not be a big deal, but for a movie for kids, this is unacceptable.

While Antz does have some brief moments of inspiration, it ends up being another mediocre film from Dreamworks. With bad animation, bad story, bad voice acting, and a lot of slow parts, Antz is a relatively pointless affair. Antz has some redeeming qualities, but ultimately, the best thing about Antz, is that it reminds us how good A Bug's Life is.

I likewise prefer A Bugs Life over this. This lacked the wit and humor. With regards to the voice acting I agree, you didn't feel the artists being into the characters, or it was just the lackluster screenplay that ruined it.