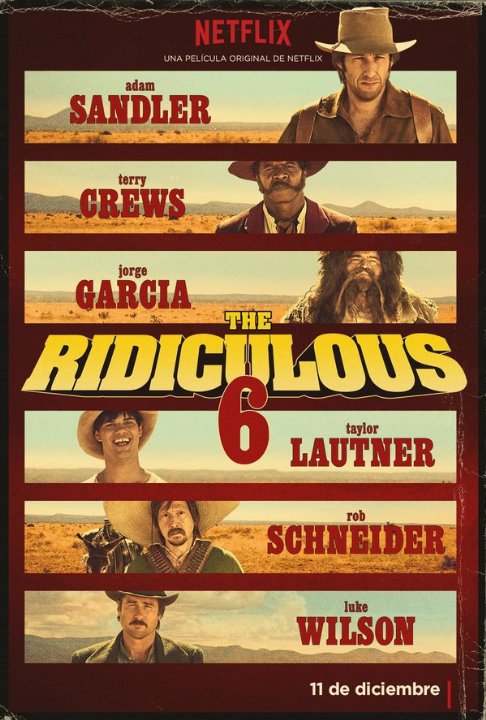 Out of all of Adam Sandler's comedies, "The Ridiculous 6" is possibly the most degradingly unfunny.

Just watch The Magnificent Seven instead.

First of i like adam sandler but this movie is awful. The critics seem to give him a hard time lately but he has done some ok decent movies and they all made money. but this one is dreadful.
sandler plays this role very straight and leaves it up to the other actors for the laughs which are few to be polite.
sandler plays a guy who has been raised by indians when his bank robber dad turns up he gets kidnapped and sandler sets out to try and find the money to release him , along the way he ends up meeting various half brothers and he ridiculous 6 is born.
There might be a few scenes that will raise a smile. the one eye patch gang or the hanging are quite cool. but most of the laughs fall flat and are spoilt but stupidity. and sandler playing the whole thing stoney faced is kinda …

I guess I'm going to be 1 of the few who actually liked & enjoyed The Ridiculous 6.Before I watched the movie I read a bunch of reviews & none of them were any good.Most people said they couldn't sit through the whole movie & turned it off before it was even over so I expected to do the same but I didn't.After watching it, I don't get what's up with all the bad reviews.If I had any complaints, it would have to be the baseball scene.It was funny but it just didn't belong.Also Adam Sandler's character was over the top & way too much sometimes especially the opening scene where he beats up the gang of outlaws & the knives parkour scenes.Other than that, the movie was funny.If you have a sense of humor like I got & enjoy Westerns like I do then I think you'll enjoy The Ridiculous 6

Worst 8 of 2015 by Stoney McStonerson

No posts have been made on this movie yet. Be the first to start talking about The Ridiculous 6!