Playing for the Mob Movie Information 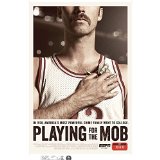 Plot: In the 1978-79 season, Boston College became involved in a point shaving scandal, orchestrated in part by Goodfella Henry Hill. Narrated by the man who played him in the hit 1990 fim, Ray Liotta, Playing for the Mob interviews those involved, from players to investigators the fixers themselves, including Hill (shortly before his death), shedding light on the full story where greed wins out, but a reckoning affects many lives. -- Chris Kavan

Who would have thought that two years of point shaving would have such long-reaching implications in the future. Basketball players saw potential careers destroyed, some of the most infamous mobsters of the time (and who the movie Goodfellas is based on) would be brought up on these chargers and it would stain the image of one college for years to come. Gordon Gecko said "Greed is good" in Wall Street, but when it comes to something like this, it only leads to jail and regret.

No posts have been made on this movie yet. Be the first to start talking about Playing for the Mob!