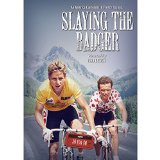 Plot: Greg LeMond is now the only American rider to officially win the Tour de France. His story, and that of French teammate (at times friends and rival) Bernard "The Badger" Hinault during the 1985-86 Tours is story of rivalry, betrayal, perseverance and determination. One of the greatest cycling stories of our age, Richard Moore's book is turned into a riveting documentary. -- Chris Kavan

I'm no cyclist, but I enjoy a great story. Slaying the Badger brings us a rivalry that is as good as any other sport. The names may not be as familiar, but in the mid-late 80s, this rivalry essentially gave rise to the current popularity of the Tour de France to American audiences and, though scandal has plagued the sport recently, during these earlier days it was all about pushing yourself to the limit - and sometimes beyond.

No posts have been made on this movie yet. Be the first to start talking about Slaying the Badger!