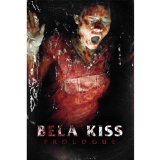 Plot: In the early days of WWI, a serial killer known as Bela Kiss killed 23 young women, draining their blood and conserving their bodies in metal containers filled with alcohol - and then disappeared. Rumored sightings continued, though he was never caught. A century later five bank robbers fleeing police hole up in an abandoned hotel - but this is no safe house - and maybe Bela Kiss never died... -- Chris Kavan

No posts have been made on this movie yet. Be the first to start talking about Bela Kiss: Prologue!