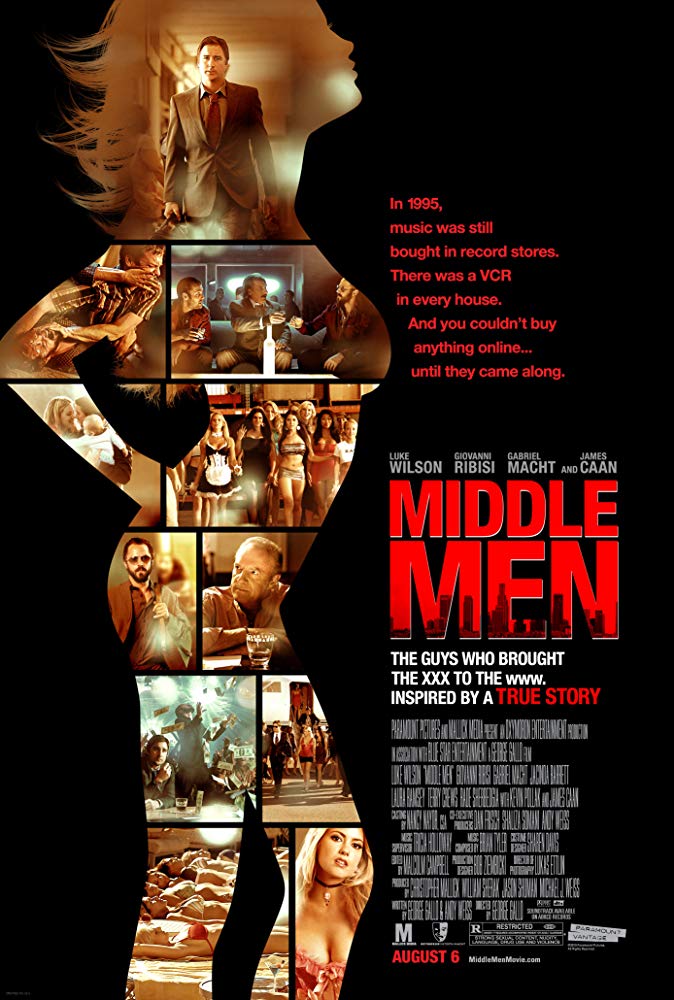 Plot: Based on the true story of Jack Harris, a family man and successful business man who goes into a partnership in 1995, utilizing the fledgling Internet to make a profit off of adult entertainment. -- Chris Kavan

An interesting look into the early world of Internet pornography and how a couple of slackers, teamed with a Russian mobster and some other unsavory characters, to make a ton of money. Jack Harris (Luke Wilson - in a great role) is caught in the middle where temptation and crime threaten to derail his life. Crazy but true - just like I like things.

I've read a couple bad reviews for this movie on other sites but I think it was pretty good.Giovanni Ribisi & Wayne Macht were great as Wayne & Buck but every actor who played a sleazeball in this movie, Played it really well.How could I forget Jason Antoon as Denny Z.He was the sleaziest! Middle Men is worth checking out at least once

Wayne (Giovanni Ribisi) is a cocaine pornography addict person who gets into business with his smart friend and Buck (Gabriel Macht). The pair suggests an idea to Russian mobster Nikita Sokoloff. Jack Harris (Luke Wilson) is given a tip by a rich lawyer named Jerry Haggerty (James Caan) about to internet sensations who peddle porn over the net. The various timelines from the beginning were a bit confusing though the character development was superb. Soundtrack was wonderful and the artists acted well. Screenplay was well written with lines like: Nikita â âSometimes business is more important than family.â Audrey â âI'll bet if you ask any old timer in one of those old folks homes, they'd tell you they regret the stuff they didn't do. Not the stuff that they did do.â …

Movies I Want To See by jam

Movies I Want To See by Tasha

No posts have been made on this movie yet. Be the first to start talking about Middle Men!