"Thor: Love and Thunder" (2022) After losing his home planet and his closest family members during the events of Avengers: Endgame and Thor: Ragnarok, Thor (Chris Hemsworth) embarks on a journey to find his place within the universe. The infamous âblipâ and Thanosâ demise are all behind him and now he is free to travel across the galaxy. But after spending years apart from his star-crossed lover, Thor is about to see a whole new side of Jane Foster (Natalie Portman). 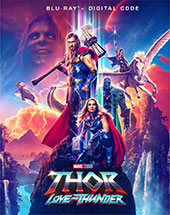 Fearful memories of this timeless 1953 bone-chiller "Invaders From Mars" (1953) still haunt the dreams of fans who have never forgotten the story of David MacLean, a young boy who witnesses an alien invasion. "Invaders from Mars" was filmed from a child's point of view, using exaggerated sets and upward angles. It became a modern classic and was also one of two 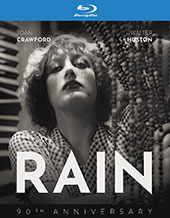 The classic "Rain" (1932), directed by Lewis Milestone and starring Joan Crawford, Walter Huston, Fred Howard, William Gargan, takes place on the South Pacific island of Pago Pago where Sadie Thompson (Crawford) is a tough-talking plaything for American G.I.s. Missionary Alfred Davidson (Huston) frowns upon her provocative flaunting. He warns her to repent or risk being deported to San Francisco where Sadie will face her dark past. Terrified and overwhelmed by his charisma, she is seduced into redemption and reborn, but in a shocking twist learns that temptation is hard to resist. Based on W. Somerset Maugham's powerful story. Brilliant performances by Crawford, as the cynical prostitute, and Huston, as the minister who tries to reform her. A "tour de force" of camerawork, style and direction, "Rain" is one of the true classic dramas of film history. Because of its subject matter, the film caused quite a controversy when first released. Celebrating it's 90 Anniversary in a stunning new 4K restoration, produced from the original, uncut 94-minute version. On DVD, Blu-ray, from VCI Entertainment ... 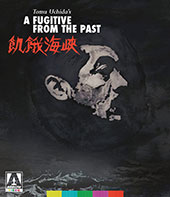 "A Fugitive from the Past" (1965 - Japan) is considered the magnum opus of the five decades-long career of Tomu Uchida; this epic crime drama was voted third in the prestigious Kinema Junpo magazine's 1999 poll of the Top Japanese Films of the 20th Century. In 1947, a freak typhoon sends a passenger ferry running between Hokkaido and mainland Japan plunging to the ocean depths, with hundreds of lives lost. During the chaos, three men are witnessed fleeing a burning pawnshop in the Hokkaido port town of Iwanai. The police suspect theft and arson, and when Detective Yumisaka (Junzaburo Ban) discovers the burned remains of a boat and the corpses of two men, he sets about tracking the shadowy third figure. Meanwhile, the mysterious Takichi Inukai (Rentaro Mikuni) takes shelter with a prostitute, Yae (Sachiko Hidari), a brief encounter that will come to define both of their lives. A decade later, long after the trail has gone cold, Yumisaka is called back by his successor Detective Ajimura (Ken Takakura) as two new dead bodies are found. Making its home video debut outside of Japan, this adaptation of Tsutomu Minakami's 1700-page novel is a landmark in master director Uchida's oeuvre. Its gritty monochrome photography has the immediacy of newsreel as Uchida uses the landscapes of postwar Japan to explore the massive social upheaval and unspoken legacies of the war, and create an unsettling karmic allegory of a man's struggle to escape his past sins. High Definition Blu-ray (1080p) presentation of the restored 183 minute-long cut of the film. On Blu-ray with original uncompressed mono audio from Arrow Video/MVD Entertainment. Read more here ... 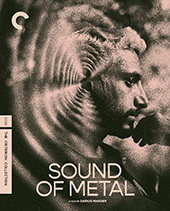 In "Sound of Metal" (2019), a tale of sound, fury, and self-discovery, Riz Ahmed delivers an intensely committed performance as the volatile Ruben, who has found new purpose as a drummer in a noise-metal duo, playing blistering live shows with his singer girlfriend, Lou (Olivia Cooke). When Ruben suddenly loses much of his hearing, he is launched on a profound odyssey - through denial, anger, grief, and, gradually, acceptance - as he comes to understand what it means to live as a deaf person and to discover deafness as not a disability but a rich culture and community. Through stunningly immersive, Academy Awardâwinning sound design, director Darius Marder invites us to experience the world as Ruben does, capturing a sonic spectrum in which silence comes in a thousand shades. On DVD, Blu-ray, 4K UHD + Blu-ray combo, with 4K digital master, supervised by director Darius Marder and cinematographer DaniÃ«l Bouquet, with 5.1 surround DTS-HD Master Audio soundtrack on the Blu-ray and 4K UHD editions. For the 4K UHD edition: One 4K UHD disc of the film presented in Dolby Vision HDR and one Blu-ray with the film and special features. From The Criterion Collection. Read more here.

"The Chocolate War" (1988), starring Ilan Mitchell-Smith, John Glover, Wallace Langham, Bud Cort, Jenny Wright, Doug Hutchison and Adam Baldwin, is based on Robert Cormier's controversial novel - once the most widely banned book in America - and is an allegory of abusive power is set in a Catholic boy's school where a chocolate sale becomes 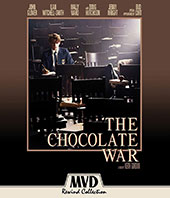 a war over conformity. Jerry (Mitchell-Smith) is a student who refuses to take part, undercutting ambitious school administrator Brother Leon (Glover). Leon secretly enlists Archie (Langham) - the sadistic mastermind of the school's resident gang - to force Jerry into line. But motives and results are far more complex than they first seem in this fascinating film. On Blu-ray from MVD Rewind ... Vinnie Jones plays Temple, a sadistic mob boss, in the action thriller "Bullet Proof" (2022). After stealing millions in cash from Templeâs drug-dealing hideout, the Thief (James Clayton) finds a stowaway in his getaway car - Templeâs pregnant wife, Mia (Lina Lecompte). Desperate to reclaim his cash - and his unborn son - Temple sends out a squad of hit men and bounty hunters to bring in Mia and the Thief. Speed, cleverness, and good aim give the duo a brief advantage, but how long will their luck hold out? On DVD, Blu-ray, from Lionsgate. Read more here ... From writer-director Rob Zombie comes the strangest love story ever told: "The Munsters (2022)," 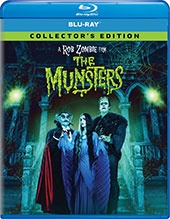 starring Jeff Daniel Phillips, Sheri Moon Zombie, Dee Wallace, Cassandra Peterson, Jorge Garcia and Daniel Roebuck. Lily is just your typical 150-year-old, lovelorn vampire looking for the man of her nightmares ... that is until she lays eyes on Herman, a seven-foot-tall, green experiment with a heart of gold. It's love at first shock as these two ghouls fall fangs over feet in this crazy Transylvanian romance. Unfortunately, it's not all smooth sailing in the cemetery as Lily's father The Count has other plans for his beloved daughter's future, and they don't involve her bumbling beau Herman. On DVD, Blu-ray, from Universal. Read more here ... In "Preman: Silent Fury" (2021 - Indonesia), starring Khiva Iskak, Kiki Narendra and Muzakki Ramha, after his son witnesses a brutal murder by a notorious crime boss, a deaf Indonesian gangster is thrust into the fight of his life when he takes on his dangerous former allies -- including a sociopathic assassin - in order to protect his child. On DVD, Blu-ray, from Well Go USA ... In "Evil Dead Trap 2: Hideki" (1992 - Japan), starring Shoko Nakajima, Rie Kondoh and ShirÃ´ Sano, a killer is on the loose in Japan; young women are being horribly mutilated. Aki, a young woman who works as a film projectionist, is haunted by a childlike ghost. Her girlfriend Emi is a TV news reporter covering the horrible mutilations. Emi introduces Aki to Kurahashi, a married man with a haunted past. Everyone involved has a dark secret and something evil is taking control of them. They are pawns in a game being played by forces beyond their understanding. On DVD, Blu-ray, from Unearthed Films. Moved from September 13.

"The Acid King" (2019) is the definitive true story of Ricky Kasso, an American teenager who murdered his friend, Gary Lauwers, in an alleged Satanic sacrifice during the summer of 1984 in Long Island New York - which led to the brief but dangerous birth of the "satanic panic" which gripped the nation. On Blu-ray from Wild Eye Releasing.

"Kung Fu: The Complete Second Season" (2021) is a three-disc set with all 13 episodes. Six months after the explosive events of Season One, Nicky and the Shens are in a great place: Nicky's been using her Kung Fu skills to keep Chinatown safe, she and Henry are only deeper in love, and the family are all in the know about Nicky's extracurricular activities. Everything's great ... until the reemergence of Russell Tan and the surprise appearance of Nicky's cousin, Mia. From Warner ... "Superman & Lois: The Complete Second Season" (2022) is a three-disc set with all 15 episodes. Season two opens with the dust still settling in Smallville following the shocking outcome of last seasonâs confrontation between Morgan Edge and Superman. With Smallville on the national map for the first time in the townâs history, Lois Lane faces fresh challenges in her latest journalistic endeavors, while Jordan and Jonathan also find themselves dealing with change. On DVD, Blu-ray, from Warner.