FROM THE BIG SCREEN:
"Black Widow" (2021) Natasha Romanoff â aka Black Widow â confronts the darker parts of her ledger when a dangerous conspiracy with ties to her past arises. Pursued by a force that will stop at nothing to bring her down, Natasha must deal with her history as a spy and the broken relationships left in her wake long before she became an Avenger. Scarlett Johansson reprises her role as Natasha/Black Widow, Florence Pugh stars as Yelena, David Harbour portrays Alexei/The Red Guardian and Rachel Weisz is Melina. The first film in Phase Four of the Marvel Cinematic Universe. 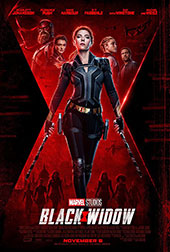 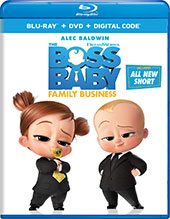 "Mona Lisa" (1986), the brilliant breakthrough film by writer-director Neil Jordan, journeys into the dark heart of the London underworld to weave a gripping, noir-infused love story. Bob Hoskins received a multitude of honors -- including an Oscar nomination -- for his touchingly vulnerable, not-so-tough-guy portrayal of George, recently released from prison and hired by a sinister mob boss (Michael Caine) to chauffeur call girl Simone (Cathy Tyson, 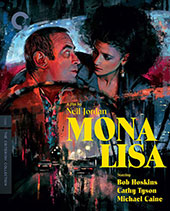 in a celebrated performance) between high-paying clients. Georgeâs fascination with the elegant, enigmatic Simone leads him on a dangerous quest through the cityâs underbelly, where love is a weakness to be exploited and betrayed. Jordanâs colorful dialogue and eye for evocatively surreal details lend a dreamlike sheen to" Mona Lisa," an unconventionally romantic tale of damaged people searching for tenderness in an unforgiving world. On Blu-ray, with 2K digital restoration, supervised by director Neil Jordan and director of photography Roger Pratt, with uncompressed monaural soundtrack. From The Criterion Collection ... Based on Stephen Kingâs novella âRita Hayworth and the Shawshank Redemption,â the inspiring drama "The Shawshank Redemption" (1994), directed by Frank Darabont and starring Tim Robbins, Morgan Freeman, Bob Gunton and William Sadler, tells the story of Andy Dufresne (Robbins), a prominent banker unjustly convicted of murder and sentenced to life imprisonment at Maineâs Shawshank Prison. He is befriended by longtime convict Red (Freeman) whoâs been in long enough to know the ropes and helps him cope with the frightening realities of prison life. As the two men grow closer, so does the sense of hope that can truly set them free. On 4K Ultra HD/Blu-ray Combo + Digital Code, from Warner. Read more here.

In "Catch the Bullet" (2021), starring Jay Pickett, Gattlin Griffith, Mason McNulty, Cody Jones, Callder Griffith, Peter Facinelli and Tom Skerritt, Britt MacMasters (Pickett), a U.S. Marshal, returns from a mission to find his father (Skerritt) wounded and his son, Chad, kidnapped by the outlaw Jed Blake. Hot on their trail, Britt forms a posse with a gunslinging deputy and a stoic Pawnee tracker. But both Jed and Britt tread dangerously close to the Red Desertâs Sioux territory, which poses a menace far greater than either can imagine. On DVD, Blu-ray, , from Lionsgate. Read more here ... 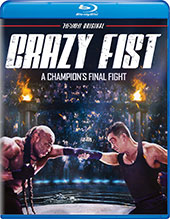 In "Crazy Fist" (2021 - China), starring Steve Yoo, Wang Wei, Collin Chou, Xiaoming Huang and Wei Zha, after an opponent dies mid-match, a prominent MMA champion swears never to fight again, instead retiring to run his familyâs international business. But when his best friend dies under suspicious circumstances during another tournament, he has no choice but to step back in the ring to help uncover the truth. On DVD, Blu-ray, from Well Go USA ... In "Censor" (2021) starring Niamh Algar, Michael Smiley and Nicholas Burns, Enid (Algar), a film censor, takes pride in her meticulous work, guarding unsuspecting audiences against the deleterious effects of watching the gore-filled decapitations and eye-gouging she pores over. Her sense of duty to protect is amplified by guilt over her inability to recall details of the long-ago disappearance of her sister, recently declared dead in absentia. When Enid is assigned to review a disturbing film from the archive that echoes her hazy childhood memories, she begins to unravel how this eerie work might be tied to her past. From Magnolia Home Entertainment/Magnet Label. Read more here ... "Zola" (2021), starring Taylour Paige, Riley Keough, Nicholas Braun and Ariâel Stachel, is based on the viral 148-tweet Twitter thread from Detroit waitress AâZiah âZolaâ King about her wild road trip to Florida. Zola is seduced into a weekend of partying in Florida, and her trip turns into a wild saga involving a pimp, an idiot boyfriend, and Tampaâs finest strip clubs. On DVD, Blu-ray, from Lionsgate ... 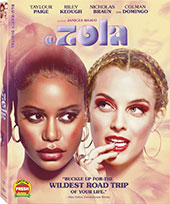 "The Influencer" (2021), starring Kasia Szarek and Shantell Yasmine Abeydeera, is a social media satire thriller. Abbie Rose is a popular social-media influencer known for her lifestyle, fashion and makeup videos. One night she signs a coveted contract with Nutrocon, a notorious cosmetic company known to pollute, test on animals and treat female workers unfairly. Immediately, sheâs taken down and tied up in her home by a group of masked activists. Overnight, they force Abbie through the filming of a video, advertising a mysterious new makeup kit. As the hackerâs plan unfolds, we learn the real reason for their visit and as Abbieâs facade fades we learn more about the lies sheâs been living. From Breaking Glass Pictures. Read more here ... "Alone in the Dark" (1982), starring Jack Palance, Martin Landau, Donald Pleasence and Dwight Schultz, makes its Blu-ray debut this week. At a secluded mental institution, electricity fuels the asylum's hi-tech security system that keeps the nearby neighborhoods safe from menaces like Frank Hawkes (Palance) and "Preacher" (Landau). Dr. Bain (Pleasence) maintains strict order while a new doctor, Dan Potter (Schultz), arrives in town with his family. But the inmates don't take kindly to Potterâs presence and believe he has killed off their former therapist. Suddenly, a power outage leaves the town in chaos ... and now the maniacs are free to roam the streets and hunt down the man they believe has invaded their lives. New 2K scan of the interpositive. From Scream Factory.

In "The Fan" (1982 -- Germany), starring DÃ©sirÃ©e Nosbusch, Bodo Steiger, Simone Brahmann and Jonas Vischer, teenager Simone appears to be like any other young pop fan. But soon her fixation on a band's lead singer, R, takes over her life. Simone walks out of school, breaks off with her friends and parents and somehow finds herself waiting for her idol as he appears on a TV show. When she sees him in the flesh she is speechless; he reaches out to touch her. Overcome with emotion, Simone faints; with that first touch, R's fate is sealed. Simone discovers the carefully styled world of which R is just another product, and she plans the ultimate sacrifice of her god on the altar of her madness, a ceremony as exalted and romantic as it is horribly wonderful. Uncut. On Blu-ray from Mondo Macabro.

In "Straight Outta Nowhere: Scooby-Doo Meets Courage the Cowardly Dog" (2021), two of animationâs most lovable canines team up in a brand-new, full-length animated family film. Comedy is unleashed when Scooby-Doo, your favorite mystery-solving mutt, teams up for the first time with Courage the Cowardly Dog. The canine colleagues sniff out a strange object in the middle of Nowhere, Kansas, the backwoods hometown of Courage and his owners, Eustace and Muriel Bagge. Soon, the mysterious discovery puts them on the trail of a giant cicada monster and her wacky winged warriors. Fred, Velma, Daphne and Shaggy know that this job is too big for a flyswatter. Theyâll need the help of the doggy duo to piece together the puzzle. Can Scooby and Courage overcome their jitters and defeat the insect army before the whole world bugs out? From Warner.

"Skinwalker: The Howl of the Rougarou" (2021): Do real werewolves exist? In the American south legends tell of encounters with a creature that stalks the swamps and bayous. A creature who was here long before the immigrants who settled the region. An ancient evil called the Rougarou. Legends tell of a cannibal tribe of shapeshifters who retreated deep into the forests where they slowly lost touch with their humanity. A tribe who went on to become something far darker: skinwalkers. Now, nearly 400 years since the legend of the Rougarou first began to circulate, people are encountering the creature once again. Small Town Monsters and director Seth Breedlove peel back the curtain on this unheralded beast in their latest documentary. From 1091 Pictures. Read more here ... 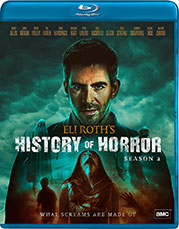 "Eli Roth's History of Horror Season 2" (2021): Award-winning horror film director, writer, producer and actor Eli Roth further explores the dark power and wicked fun of scary movies, the craft that went into making them and the ways that horror films reflect the anxieties of their times. Covering horror themes including Houses of Hell, Monsters, Witches and Chilling Children, Season 2 features interviews with Stephen King, Quentin Tarantino, Bill Hader, Greg Nicotero, Piper Laurie, Nancy Allen, Slash, Rob Zombie and more. On DVD, Blu-ray, from RLJE Films ... "The Human Factor" (2021): With unprecedented access to the foremost American negotiators, this documentary is the behind-the-scenes story from the last 25 years of how the United States came within reach of pulling ofÂ­ the impossible â securing peace between Israel and its neighbors. Today, the need to learn from past mistakes couldnât be more urgent. On DVD, Blu-ray, from Sony.

"Magnum P.I.: Season Three" (2020-21) is a five-disc set with all 16 episodes of the remake of the 1980 series. Here, Magnum is an ex-Navy SEAL who returns from Afghanistan and uses his military skills to become a private investigator in Hawaii. He lives in a guest cottage on Robinâs Nest, the luxurious estate where he works as a security consultant to supplement his P.I. business. The âmajordomoâ of the property is Juliet Higgins, a beautiful and commanding disavowed MI:6 agent whose second job is to keep Magnum in line. From CBS/Paramount ... "Mare of Easttown: An HBO Original Limited Series" (2021) is a two-disc set with all seven episodes. Both a critical and ratings hit, "Mare of Easttown" is one of only two series in HBOâs history to enjoy week over week growth culminating in a finale episode that was watched by nearly 3 million viewers, setting a record. Kate Winslet stars as Mare Sheehan, a respected small-town Pennsylvania detective investigating a local murder while also balancing her own personal life, which is rapidly falling apart around her. Also stars Julianne Nicholson, Jean Smart, Angourie Rice, Evan Peters, Guy Pearce. On DVD, Blu-ray, from Warner.