FROM THE BIG SCREEN:
"Mortal Kombat" (2021) MMA fighter Cole Young, accustomed to taking a beating for money, is unaware of his heritage -- or why Outworld's Emperor Shang Tsung has sent his best warrior, Sub-Zero, an otherworldly Cryomancer, to hunt Cole down. Fearing for his family's safety, Cole goes in search of Sonya Blade at the direction of Jax, a Special Forces Major who bears the same strange dragon marking Cole was born with. Soon, he finds himself at the temple of Lord Raiden, an Elder God and the protector of Earthrealm, who grants sanctuary to those who bear the mark. 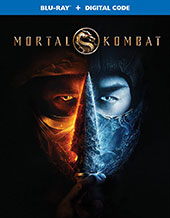 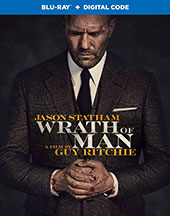 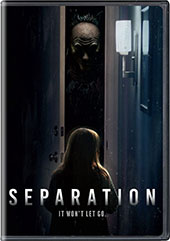 (2021) Eight-year-old Jenny (Violet McGraw) is constantly caught in the middle of the feuding between her lawyer mother Maggie (Mamie Gummer) and artist father Jeff (Rupert Friend). She leads a lonely but imaginative life, surrounded by puppets called "Grisly Kin", which are based on the works of her father. When Maggie is tragically killed in a hit-and-run, Jeff and Jenny try to piece together a new life. But when Maggieâs father (Brian Cox) sues for custody, and babysitter Samantha (Madeline Brewer) tries to be the new woman of the house, life in their Brooklyn townhome takes a dark turn. The puppets and frightening characters come to life and Jenny is the only person who can see them. When the motives of the ghoulish creatures become clear, the lives of everyone are put very much in jeopardy. Vitals: Director: William Brent Bell. Stars: Madeline Brewer, Rupert Friend, Brian Cox, Violet McGraw, Madeline Brewer. 2021, CC, MPAA rating: R, 105 min., Horror, US box office gross: $4.509 million, worldwide $4.509 million, Universal. Formats: DVD, VOD, Digital. Read more here.

"The SpongeBob Movie: Sponge on the Run" 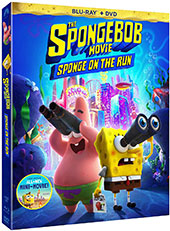 (2020) When SpongeBobâs beloved pet snail Gary goes missing, a path of clues leads SpongeBob and Patrick to the powerful King Poseidon, who has Gary held captive in the Lost City of Atlantic City. On their mission to save Gary, SpongeBob and his pals team up for a heroic and hilarious journey where they discover nothing is stronger than the power of friendship. Vitals: 2019, CC, MPAA rating: PG, 91 min., Family Animated, US box office gross: $4.810 million, worldwide $4.810 million, Paramount. Formats: DVD, Blu-ray, VOD, Digital. Extras: Mini-Movie: "Iâm Urchin You to Leave," campfire songs, campfire stories, Camp Coral buddies, camp arts and crafts, "But Wait ... Thereâs Sâmores! The Wonders of the Patty Mobile." Read more here. 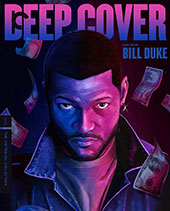 Fishburne stars as Russell Stevens/John Hull, a police officer who goes undercover as the partner of a dangerously ambitious cocaine trafficker (Jeff Goldblum) in order to infiltrate and bring down a powerful Latin American drug ring operating in LA. But the further Stevens descends into this ruthless world of money, violence, and power, the more disillusioned he becomes -- and the harder to make out the line between right and wrong, crime and justice. Steeped in shadowy, neon-soaked atmosphere and featuring Dr. Dreâs debut solo single, this unsung gem of the ninetiesâ Black cinema explosion delivers a riveting character study and sleek action thrills alongside a furious moral indictment of America and the devastating failures of the war on drugs. In Blu-ray debut from The Criterion Collection ... From John Farrow, the director of "Wake Island," "The Big Clock" and "Hondo," comes the shock-filled film noir "Alias Nick Beal" (1949), starring Ray Milland, Audrey Totter, Thomas Mitchel and George Macready. Joseph Foster (Mitchell) is an honest district attorney who wants to run for governor in order to clean up the criminal underworld. Blocked by corrupt political forces, Foster would practically have to make a deal with the Devil to reach his goal. Enter Nick Beal (Milland), a diabolically handsome gent with a slick line of patter and a smooth, infallible method of getting things done. Foster agrees to a deal, and to bind the bargain, Beal sends out one of his most trusted associates, Donna Allen (Totter), to keep Foster in line. When Foster finally realizes that heâs sold his soul, there seems to be no way out ... but thatâs when the forces of Good switch into high gear. On DVD, Blu-ray, from Kino Lorber Studio Classics ... 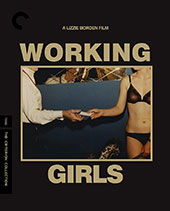 Sex work is portrayed with radical nonjudgment in "Working Girls" (1986), Lizzie Bordenâs immersive, richly detailed look at the rhythms and rituals of societyâs most stigmatized profession. Inspired by the experiences of the sex workers Borden met while making her underground feminist landmark "Born in Flames," "Working Girls" reveals the textures of a day in the life of Molly (Louise Smith), a photographer working part-time in a Manhattan brothel, as she juggles a steady stream of clients, balances nurturing relationships with her co-workers with the demands of an ambitious madam, and above all fights to maintain her sense of self in a business in which the line between the personal and the professional is all too easily blurred. In viewing prostitution through the lens of labor, Borden boldly desensationalizes the subject, offering an empathetic, humanizing, often humorous depiction of women for whom this work is just another day at the office. In a Blu-ray debut from The Criterion Collection ... John Payne, Joan Caulfield, Dan Duryea and Shelley Winters play the old confidence game in "Larceny" (1948), a riveting crime drama. Smooth-talking grifter Rick Maxon (Payne) tries to swindle wealthy war widow Deborah (Caulfield) into giving up her savings for a nonexistent memorial. When Rick falls in love with Deborah he has pangs of remorse, but he must contend with his gang boss, Silky (Duryea), and the tough-as-nails moll, Tory (Winters), who is enamored with Rick but is considered Silkyâs girl. Director George Sherman keeps the twists and turns coming in this hard-boiled film noir. On DVD, Blu-ray, from Kino Lorber Studio Classics.

In "Held" (2020), starring Jill Awbrey and Bart Johnson, Emma and Henry's marriage is losing its spark. In an effort to reconnect, they plan a vacation to a remote high-end rental, complete with automated smart house features and integrated security. However, after suspecting a nighttime intruder, they quickly decide to flee, only to become forcibly trapped inside by the automated security system. Emitting from the house, an unknown "Voice" watches their every move through an array of hidden cameras, revealing an intimate and unsettling knowledge of their relationship. While the situation grows increasingly brutal, Emma and Henry must work together to uncover the truth and find a way out before it's too late. On DVD, Blu-ray, from Magnolia Home Entertainment/Magnet Label. Read more here ... 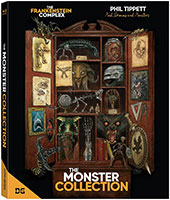 "The Monster Collection Blu-ray Collector's Edition is a three-disc Blu-ray release that celebrates the wild, weird and wonderful stories behind the creation of the worldâs greatest movie monsters, aliens and sci-fi creatures. Includes: "Phil Tippett: Mad Dreams and Monsters" (2019), which examines the life and career of Phil Tippett, the Oscar and Emmy Award-winning visual effects genius whose work in creature design, stop-motion and computerized character animation has been seen in such classics as the original "Star Wars" trilogy, the "Jurassic Park" and "Twilight" franchises and the effects powerhouses "RoboCop", "Dragonheart" and "Starship Troopers"; "The Frankenstein Complex" (2015), a lively portrait and appreciation of the greatest movie monsters in film history and the talented crafts people and visual artists who have been bringing them to startling life over the past century. Goes behind the scenes of such classics as "King Kong," "Avatar," "The Lord of the Rings" series, "An American Werewolf in London," "Alien" and many others to talk to the filmmakers behind all those dinosaurs, zombies, aliens, Hobbits, dragons, werewolves, giant bugs and oversized apes that have kept us glued to the screen for all these years. Third disc contains 12 hours of bonus features. From Doppelganger Releasing ... "A Cinderella Story: Starstruck" (2021), starring Bailee Madison, Michael Evans Behling and April Telek, is the sixth installment in the "A Cinderella Story" movie series. Finley Tremaine, a small-town farm girl in Dreary, Idaho, longs to spread her wings and soar as an aspiring performer. When a Hollywood film crew arrives in her sleepy town, she's determined to land a role in the musical production and capture the attention of handsome lead actor Jackson Stone. Unfortunately, a botched audition forces her to change course. Disguised as cowboy âHuck,â Finley finally gets her big break, but can she keep the charade a secret from everyone, including her evil stepmother and devious step-siblings? From Warner ... 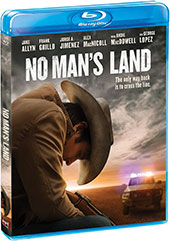 In "No Man's Land" (2020), starring Jake Allyn, Frank Grillo, Jorge A. Jimenez, Esmeralda Pimentel, Andie MacDowell and George Lopez, border vigilante Bill Greer (Grillo) and his son Jackson (Allyn) are on patrol when Jackson accidentally kills a Mexican immigrant boy. Bill tries to take the blame but Texas Ranger Ramirez (Lopez) sees through the lie, spurring Jackson to flee south on horseback across the Rio Grande to become a gringo âillegal alienâ in Mexico. Chased by Texas Rangers and Mexican federales, Jackson journeys across deserts and mountains to seek forgiveness from the dead boyâs vengeful father (Jimenez), as he falls in love with the land he was taught to hate. On DVD, Blu-ray, from Universal.

In "My Zoe" (2021), starring Julie Delpy, Sophia Ally, Richard Armitage, Gemma Arterton and Daniel Bruhl, recently divorced scientist Isabelle struggles to co-parent her daughter Zoe with her argumentative ex. But when Zoe suffers an unexpected brain hemorrhage and is put on life support, Isabelle comes up with an audacious plan to keep some version of her daughter alive. A meditation on loss, grief, and technology's very human limits, the film is the story of enduring love in a future that strikes close to our present. From Breaking Glass Pictures ... 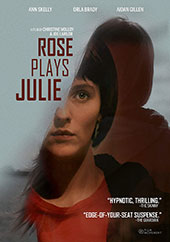 In "Rose Plays Julie" (2019), starring Ann Skelly, Orla Brady and Aidan Gillen, Rose (Skelly) is a promising veterinary student in Dublin. Despite having a loving relationship with her adoptive parents, she has been searching for her birth mother for many years. When Rose finally tracks Ellen (Brady) down in London, she forces her to reveal a painful secret from her past. This shocking revelation rattles Rose's already fragile sense of identity and draws her into a dangerous world of impersonation, deception and revenge. From Film Movement ... In "The Night" (2021 -- US/Iran), after a night out with friends, an exhausted married couple, Babak (Shahab Hosseini) and Neda (Niousha Noor), and their baby, take shelter in the grand, but eerie Hotel Normandie. Throughout a seemingly endless night, mysterious disturbances ruin their rest as Babak and Neda soon realize theyâre locked in with a malevolent force that hungers for the dark secrets theyâve kept from one another. Director Kourosh Ahari made history for being the first U.S.-produced film to receive a license for theatrical release in Iran since the revolution. On DVD, Blu-ray, from IFC/Shout! Factory.

In "A Soldier's Story 2: Return from the Dead" (2021 -- Nigeria), starring Linda Ejiofor Somkele, Iyamah-Idhalama and Tope Tedela, Regina asks her friend, Zaya, to look after her younger brother in the Watz Republic, while she travels with her fiancÃ©e, Major Egan, to Nigeria. Still affected by the recent war, Zaya and the other villagers try to begin the process of healing when an American company unexpectedly takes over following the discovery of crude oil in the Watz Republic. While traveling through Nigeria, Regina and Major Egan escape an assassination attempt and try to return home to rescue their friends and family before war, once again, consumes them all. When conspiracies run deeper than expected, they find themselves on a complicated mission to survive. From Indican Pictures.