THIS WEEK'S BEST BETS:
Screwball sparks fly when Cary Grant and Katharine Hepburn let loose in one of the fastest and funniest films ever made -- "Bringing Up Baby" (1938), a high-wire act of invention that took American screen comedy to new heights of absurdity. Hoping to procure a million-dollar endowment from a wealthy society matron for his museum, a hapless paleontologist (Grant) finds himself entangled with a dizzy heiress (Hepburn) as the manic misadventures pile up -- 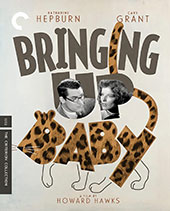 a missing dinosaur bone, a leopard on the loose, and plenty of gender-bending mayhem among them. "Bringing Up Babyâs" sophisticated dialogue, spontaneous performances, and giddy innuendo come together in a whirlwind of comic chaos captured with lightning-in-a-bottle brio by director Howard Hawks. On DVD, Blu-ray, with new, restored 4K digital transfer, with uncompressed monaural soundtrack on the Blu-ray, from The Criterion Collection ... "Threshold" (2020), the second feature from co-directors Powell Robinson and Patrick R Young, following their debut "Bastard" (2015), was improvised and shot on two iPhones over the course of a 12-day road trip with a crew of just three. The result is an inventive and compelling psychological thriller with hints of the supernatural that recalls such indie cult classics as Ben Wheatley's "Kill List" (2011) and Justin Benson And Aaron Moorhead's "Resolution" (2013). When a phone call from out of the blue brings Leo (Joey Millin) back into contact with his sister, Virginia (Madison West), long estranged from her family due to years of drug abuse, he arrives to find her alone in a bare apartment in the midst of an apparent 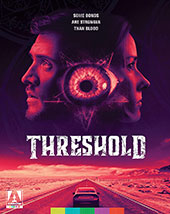 overdose. After the convulsions and nausea subside, Virginia insists to Leo that she has been clean for eight months due to the help of a mysterious group. She confides to her cynical brother that her edginess and paranoia actually stem from a sinister ritual conducted by the group that took her in at her lowest and eventually revealed themselves to be a cult. This curse bound her emotions and physical sensations to a man she has never met before. With his marriage on the rocks, Leo has his own demons to face. Nonetheless, he is reluctantly persuaded by Virginia to embark on a cross-country road trip to track down this shadowy stranger under the caveat that if he's nowhere to be found and it's all in her head, she'll go to rehab. However, as their date with destiny draws nearer, Leo begins to suspect his sister's tall tale might have some substance. On DVD, Blu-ray, from Arrow Video/MVD Entertainment) ...Andrei Tarkovsky's "Mirror" (1975 -- France) makes its Blu-ray debut this week. A subtly ravishing passage through the halls of time and memory, this sublime reflection on 20th-century Russian history is as much a poem composed in images, or a hypnagogic 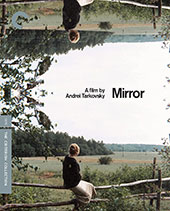 hallucination, as it is a work of cinema. In a richly textured collage of varying film stocks and newsreel footage, the recollections of a dying poet flash before our eyes, his dreams mingling with scenes of childhood, wartime, and marriage, all imbued with the mystical power of a trance. Largely dismissed by Soviet critics on its release because of its elusive narrative structure, "Mirror" has since taken its place as one of the directorâs most renowned and influential works, a stunning personal statement from an artist transmitting his innermost thoughts and feelings directly from psyche to screen. Tarkovsky only directed seven feature films in his short 24-year career. His most famous film is "Solaris" (1972); his most influential film may very well be the cult sci-fi epic "Stalker" (1979), whose influence can be seen most directly in 2018's "Annihilation," starring Natlie Portman. Tarkovsky died of cancer in 1986 at the age of 54. "Mirror" has a new 2K digital restoration, with uncompressed monaural soundtrack, from The Criterion Collection.

While composing her famous novel âFrankenstein,â Mary Shelley descends into an opium-fueled fever dream and carries on a torrid love affair at a remote lake house in "A Nightmare Wakes" (2021), starring Alix Wilton Regan, Giullian Gioiello, Claire Glassford and Philippe Bowgen. As she writes, the characters of her novel come to life and begin to plague her relationship, forcing everyone -- including herself -- to question her sanity. From RLJE Films. Read more here ... 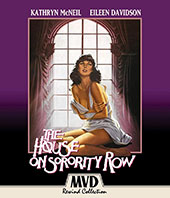 "The House on Sorority Row: Special Edition" (1982), starring Kathryn McNeil, Eileen Davidson, Janis Ward, Robin Meloy, Harley Jane Kozak and Jean Schertler, is a sexy suspense-horror film that combines a tantalizing story with heart-pumping direction to deliver a smashing impact that has been called "enough to make viewers consider dorm life." Come meet the girls of Theta Pi. All through college they've lived under the tyranny of their resident house mother. But tonight will be different. Tonight the girls of Theta Pi are celebrating their graduation in the most deadly way they know. When these inventive senior sisters decide to do in their demented house mother, it's an easy task. But, someone has seen, someone who 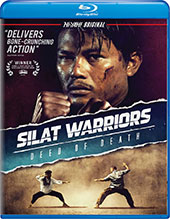 wants revenge. And no college class could have prepared the girls - or you - for the horrifying mayhem that greets them on that last fateful night in The House on Sorority Row. On DVD, Blu-ray, from MVD Rewind ... When a reckless young gambler's wild lifestyle of illegal betting, drag racing, and brutal street fights pits him against a ruthless criminal enterprise, his luck finally runs out in "Silat Warriors: Deed of Death" (2019-- Malaysia). The gang shows up at his fatherâs home to collect on the debt, forcing his family to fight in order to save their land â- and his life. On DVD, Blu-ray, from Well Go USA ... In the idyllic post-war 1950s, young men across the country were aspiring to achieve the American dream of marriage, family and stability. But others longed for something different. In "The Last Time I Committed Suicide" (1997), starring Thomas Jane, Keanu Reeves, 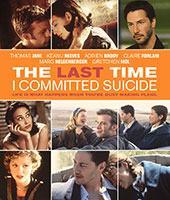 Claire Forlani, Adrien Brody, Marg Helgenberger, Amy Smart, Lucinda Jenney and Gretchen Mol, meet Neal Cassady (Jane). He's got a poet's soul, a dreamer's heart and a choice to make. Caught between the allure of a drifter's life on the road and the security of a traditional home, Neal must decide which future he most desires. This is the unforgettable story of love, friendship and discovering how to stay a beat ahead of the crowd. Cassady, of course, was the ultimate Beat and hippie hero; the film is based on a letter written by Cassady to Jack Kerouac in 1950. On DVD, Blu-ray, from MVD Visual ... In "Miranda Veil" (2020), starring Zach Steffey and Annabel Barrett, aspiring serial killer Soren has finally mustered the courage to capture and kill his first victim. After drugging Miranda Veil at a highway pitstop, Soren takes her to a secluded area and succumbs to his obsession. However, both predator and prey are shocked to discover that she is unable to die, no matter how many times Soren attempts to end her life. From Indiecan Pictures ... 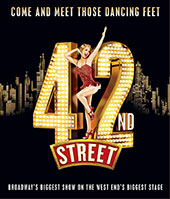 "42nd Street" (2019 -- UK), starring Bonnie Langford, Tom Lister, Philip Bertioli and Clare Halsem, is a big screen adaptation of the 1980 Broadway song and dance musical extravaganza. Peggy Sawyer is from small-town America and just a face in the chorus line of "Pretty Lady,: the new show from legendary director Julian Marsh. But when the show's leading lady, Dorothy Brock, is injured, Peggy's dreams of stardom just may come true.On DVD, Blu-ray, from Liberator Films ... In "Dark Spell" (2021 -- Russia), Zhenya, a young wife and mother, is heartbroken after her husband leaves her. Desperate, she tampers with the forces of reality by employing sinister magic -- in the form of a spell called âBlack Weddingâ -- to bring him back into her arms. Sure enough, her husband returns to her ... but his renewed love for Zhenya has become twisted into something far more obsessive and frightening. Now Zhenya has no other choice but to find a way to reverse an irreversible spell, but she soon learns that not even death will part those who have been joined by the Black Wedding. On DVD, Blu-ray, from Scream Factory. Read more here ... 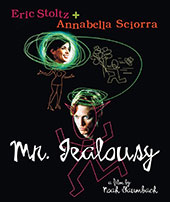 Eric Stoltz, who'd played a philosophical bartender and lifelong student for director Noah Baumbach in "Kicking and Screaming," returns in "Mr. Jealousy" (1998), Baumbach's sophomore feature, as an aspiring novelist, Lester, who exhibits obsessive behavior when girlfriend Ramona (Annabella Sciorra) mentions a previous relationship with well-known writer Dashiell Frank. That sends Lester into a spiral of compulsive behavior and hysterically elaborate subterfuges. From acclaimed three-time Academy Award-nominated writer and director Baumbach ("The Squid and The Whale," "Marriage Story") and featuring Peter Bogdanovich, comes this refreshing comic look at life, love and jealousy. On DVD, Blu-ray, from Moonstone Entertainment ... After a diamond heist takes a fatal turn, a pair of thieves must entrust their fortune with an accomplice at a high-tech storage facility while they lay low in "Locked In" (2021), starring Mena Suvari, Jeff Fahey, Manny Perez, Costas Mandylor, Bruno Bichir and Jasper Polish. Hiding the goods within the labyrinth of storage units, the thievesâ inside man pays the ultimate price when he turns against them. Now, hellbent on recovering the missing stones, they seize the facility and kidnap surviving employee Maggie (Suvari), threatening her family unless she helps them. Locked in with nowhere to run, Maggie's only chance to escape alive is to fight back and stay one step ahead of her captors in a deadly game of cat and mouse. From Paramount. Read more here.

"Defending Jacob" (2020) is a three-disc set with all eight episodes. A character-driven thriller based on the 2012 New York Times best-selling novel of the same name, the limited series unfolds around a shocking crime that rocks a small Massachusetts town and one family in particular, forcing an assistant district attorney (Chris Evans) to choose between his sworn duty to uphold justice and his unconditional love for his son. The series also stars Michelle Dockery, Jaeden Martell, J.K. Simmons and Cherry Jones. From Paramount.