THIS WEEK'S BEST BETS
Masterful director Frank Borzage's brilliance behind the camera empowers "The Mortal Storm" (1940), the story of Hitler's rise to power as seen through the microcosm of one German family. What on the surface seems small and personal, is instead a towering bold revelation of the brutality of the Nazi regime. James Stewart and Margaret Sullavan lead an impressive cast in a sweeping tale of the political and human chaos that rips a family apart, leading to savagery, sacrifice, and ultimately heroism. The Mortal Storm

is available in its Blu-ray debut from Warner Archive.

" (2018), the combined spirits of H.P. Lovecraft, early Sam Raimi and Mystery Science Theater 3000 inhabit an action-packed tale of nautical derring-do and monster mayhem - winner of the Audience Award for Best International Feature at the 2019 Fantasia Film Festival. On the shores of Lake Michigan, the eccentric Captain Seafield (Ryland Brickson Cole Tews, who also writes and directs) enlists a colorful crew of misfits in a bid 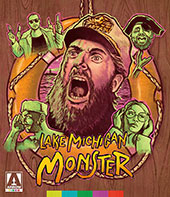 to slay the hellish sea monster that prowls the murky depths. But as Seafield's obsession with exacting revenge on the creature that killed his father threatens to consume him, can weapons expert Sean Shaughnessy (Erick West), sonar whiz Nedge Pepsi (Beulah Peters) and former N.A.V.Y. - Nautical Athletes and Adventure Yunit - officer Dick Flynn (Daniel Long) hold the show together? Shot in gloriously retro black and white on a shoestring budget, with most of the cast also performing multiple roles behind the camera, "Lake Michigan Monster" is an inventive, irreverent and riotously entertaining ode to the classic monster movies of yesteryear: an absurdist urban legend guaranteed to appeal to the big kid in all of us. On Blu-ray from Arrow Video/MVD Entertainment ... Its 1979, and a 13-year-old science nerd stumbles upon a possessed tape player and accidentally unleashes a demonic entity in "They Reach 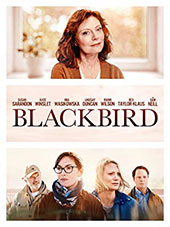 DVD, Blu-ray, from Uncorkâd Entertainment ... In "Attack of the Demons

" (2019), the year is 1994. For centuries, a demonic cult has been plotting the destruction of mankind. When a small Colorado town is overrun by a legion of mutating demons, three non-demon hunter friends must use every skill their minds can fathom to stave off the demon apocalypse. Animated. From Dark Star Pictures ... In "Blackbird

" (2020), starring Susan Sarandon, Sam Neil, Kate Winslet, Mia Wasikowska, Rainn Wilson, Lindsay Duncan, Bex Taylor-Klaus and Anson Boon, Lily (Sarandon) and Paul (Neil) summon their loved ones to their country house for one final gathering after Lily decides to end her struggle on her own terms after a long battle with ALS. The couple plans a loving weekend complete with holiday traditions, but the mood becomes strained when unresolved issues surface between Lily's daughters Jennifer (Winslet) and Anna (Wasikowska). Joining the collective farewell are Lily's son in law (Wilson), her lifelong friend (Duncan), daughter's partner (Taylor-Klaus) and grandson (Boon). Her story is ultimately one of hope, love and a celebration of life. On DVD, Blu-ray from Screen Media ... In "Blind 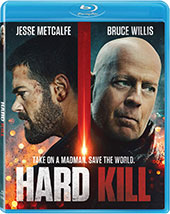 her vision due to botched laser eye surgery, struggles to put her life back together while living alone in her dream house in the Hollywood Hills. She soon starts opening to Luke, a personal trainer who is mute and can only communicate through his cell phone. Trouble begins when a masked stranger named Pretty Boy shows up. From Uncorkâd Entertainment ... In "Hard Kill

" (2020), starring Jesse Metcalfe, Bruce Willis and Natalie Eva Marie, when billionaire tech CEO Donovan Chalmers (Willis) hires a team of mercenaries to protect a lethal piece of technology, security expert and team leader Derek Miller (Metcalfe) finds himself in a deadly showdown with an old enemy. The mission becomes even higher risk when Chalmers' daughter is kidnapped by a terrorist group who will stop at nothing to obtain the tech. Miller and his team must race against the clock to save her and protect the fate of the human race before it's too late. On DVD, Blu-ray from Lionsgate ... In "Antebellum 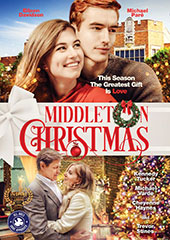 trouble is: Sam already has a boyfriend, basketball star Lucas. While Sam wrestles with her feelings about both guys, her mother, school dean Alana, recruits Max and his father Johnny, the new maintenance man, to help out with a Christmas fundraiser that could save the school from being closed. But when Samâs life is threatened in a serious car accident, Alana and Johnny grow closer, even as Max and Lucas both realize how much they each care for her, culminating in a decision that will change their lives forever. With Christmas approaching, everyone in Middleton must question their values about sacrifice, family, and love -- and learn what it means to just be thankful for another Christmas. From Uncorkâd Entertainment.

In "The SpongeBob Musical: Live on Stage!" (2020), SpongeBob and all of Bikini Bottom face catastrophe -- until a most unexpected hero rises to take center stage to prove that the power of optimism really can save the world. This one-of-a-kind musical event boasts the 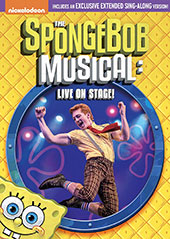 full, extended-length broadcast of the hit Broadway musical, plus an exclusive sing-along version only available on this DVD. From Paramount ... In "Emily and the Magical Journey" (2020), starring Harriet Slater and Tipper Seifert-Cleveland, Emily and her mother live alone after losing her father. She wants to help her mother find happiness and to learn about the father she never knew. When Emily finds a mysterious chest that transports her to a magical world, she meets fantastic and mythical creatures that become her new friends. After discovering her new friends are in danger, Emily must face her worst fear to complete her journey. From Uncork'd Entertainment.

" (2018 -- US/Cuba), skateboards are contraband in Cuba, but for 40 years an underground skate culture survived on splintered decks and worn-out wheels. Now, Cubaâs renegade skaters are teaming up with a charity group out of Miami that smuggles skateboards into the blockaded country. Their mission -- overcome old prejudices and build a skate park in Havana to inspire Cubaâs at-risk youth. From Indican Pictures.

"Catherine The Great: An HBO Limited Series" (2019) is a two-disc set. Oscar-winner Helen Mirren (âThe Queenâ) stars as the tumultuous monarch and politician who ruled the Russian empire and transformed its place in the world in the 18th century. The four-part miniseries charts Catherineâs reign as the intelligent, resourceful, and utterly determined Empress who fights off threats to her crown, wages war with the Ottoman Empire, and expands 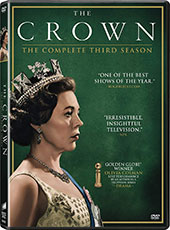 Russiaâs borders as far as the Black Sea and Crimea. A sweeping epic, the miniseries also depicts the love affair between Catherine and Russian military leader Grigory Potemkin (Jason Clarke), this most extraordinary woman and man of their age who formed a singular and powerful relationship, turned the nation into a great global power, and shaped the future of Russian politics. From Warner Archive ... "The Crown: The Complete Third Season" (2020) is a four-disc set with all 10 episodes. Traces the life of Queen Elizabeth II from her wedding in 1947 through to the early part of the 21st century. Season Three covers the time period between 1964 and 1977 and introduces an outstanding new ensemble cast led by Olivia Colman and Tobias Menzies. Beginning with Harold Wilsonâs election as the Queenâs first Labour prime minister and ending with the Silver Jubilee of Elizabeth II, it follows pivotal moments such as the death and state funeral of Winston Churchill, the Aberfan disaster, the Apollo 11 moon landing and investiture of Prince Charles as the Prince of Wales. On DVD, Blu-ray, from Sony.