THIS WEEK'S BEST BETS:
Adapted from his Pulitzer Prize-winning play, "Glengarry Glen Ross" (1992) shows David Mamet at his searing, profane best. A group of Chicago real-estate salesmen-cum-con artists live on the edge. Life is good for the one on a roll. For the rest, life hangs in the balance. There is no room for losers. A-B-C: Always Be Closing, sell, or go under, is the salesman's mantra. With the pressure on, so begins a rainy night of cutthroat business and shattered lives. Stars Al Pacino, Jack Lemmon, Alec Baldwin, Ed Harris, Alan Arkin, Kevin Spacey and Jonathan Pryce. Glengarry Glen Ross

comes in a new 4K transfer from the original film elements. 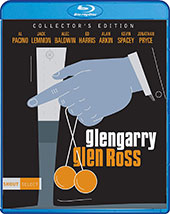 In a Blu-ray Collector's Edition from Shout!Select ... "Tokyo Godfathers

" (2003 -- Japan) is a humanist masterpiece from the legendary director Satoshi Kon ("Paprika," "Perfect Blue"). Co-written by Keiko Nobumoto ("Cowboy Bebop") and featuring a whimsical score by Keiichi Suzuki, this beautiful tale of hope and redemption in the face of seemingly insurmountable odds makes its Blu-ray, restored and remastered from a 4K transfer. The release also marks the first time the film is available with an English dub in addition to the original Japanese audio track. In modern-day Tokyo, three homeless peopleâs lives are changed forever when they discover a baby girl at a garbage dump on Christmas Eve. As the New Year fast approaches, these three forgotten members of society band together to solve the mystery of the abandoned child and the fate of her parents. 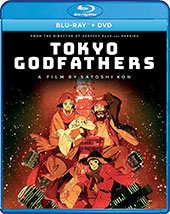 Along the way, encounters with seemingly unrelated events and people force them to confront their own haunted pasts, as they learn to face their future, together. In a Blu-ray debut from GKIDS/Shout! Factory.

In "The Blackout: Invasion Earth

" (2019 -- Russia) starring Maksim Artamonov, Filipp Avdeev and Yuriy Borisov, someone or something is plunging humanity into darkness. An unexplained phenomenon has struck the Earth. Contact between most towns on Earth has been severed. A small area in Eastern Europe is the only location that still has electricity. When military forces venture outside, they discover a shocking truth â corpses everywhere. In stores, in cars, on roads, in hospitals and railway stations. Who or what is destroying all life on Earth? And how long can the last outpost of mankind endure? On DVD, Blu-ray, from 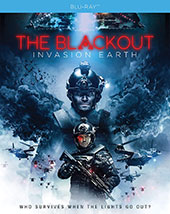 Shout! Factory ... In "Witches in the Woods

" (2019), starring Hannah Kasulka, Craig Arnold, Sasha Clements, Corbin Bleu, Alexander De Jordy, Humberly Gonzalez, Kyle Mac and Ian Matthews, a tenacious college freshman abandons her studies one weekend for an off-the-grid snowboarding trip with six friends. Driving through the freshly-logged mountains of western Massachusetts, a road closure forces them onto an unmarked route into the dark forest. These are the very woods where centuries ago, a dozen women were convicted and hanged for witchcraft. Disoriented in the dense wilderness, the friends slam the SUV into a ditch, totaling the car. As nighttime falls and temperatures drop, the group dynamic begins to unravel. Hypothermia sets in, and violent hallucinations threaten the groupâs sanity. With nowhere to go for help, the group risk freezing to death or facing the horrors that lie in the haunted wasteland beyond. On DVD, Blu-ray, from Shout! Studios ... "A Clear Shot 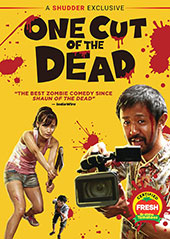 Electronics Store siege in Sacramento, California, the largest hostage siege negotiation ever attempted in the United States. The electronic store erupted into chaos as four gunmen stormed the premises. Rick Gomez, Sacramento Police Departmentsâ top negotiator, realized he needed to talk down the gunmen and keep everyone safe, all the while juggling government politics. The gunmen leader doesn't want to hurt anyone, but his brother is a different story. A peaceful surrender quickly turned this sleepy city into a national tragedy. From Uncorkâd Entertainment ... While shooting a low-budget zombie film in an abandoned warehouse, the crew find themselves caught between actual zombies and a mad director who won't stop rolling in "One Cut of the Dead

" (2017 -- Japan). If you think you know what happens next, think again. Filmmaker Shinichiro Ueda turns the film on its head more than once for a wild, funny, and most surprising zombie movie. Stars Harumi Shuhama, Takayuki Hamatsu and Yuzuki Akiyama. On DVD and in a Blu-ray/DVD Combo Steelbook, from RLJE Films ... In "The Strange Vice of Mrs. Wardh

" (1971 --Italy), starring George Hilton, Edwige Fenech, Conchita Airoldi, Ivan Rassimov and Alberto de Mendozam Fenech stars as an unfaithful diplomatâs wife who finds herself hunted by a razor-wielding sex maniac while simultaneously haunted by her own depraved desires. Also known as "Blade of the Ripper" and "Next!" Newly scanned in 4k from the inter-negative. In English and Italian with English subtitles. On DVD, Blu-ray, from Severn Films.

" (2019), starring Noah Schnapp, Seu Jorge, Mark Margolis and Dagmara Dominczyk, 12-year-old Abe is an aspiring chef who wants his cooking to bring people together -- but his half-Israeli, half-Palestinian family has never had a meal that didn't end in a fight. Ditching his traditional summer camp, Abe begins working with Chico, an adventurous street chef who encourages him to think outside his old cuisines. But when Abe's deceit is uncovered, he must grapple with his family, his background, and his passions, and whether even the most lovingly-cooked family dinner can heal old wounds. From Breaking Glass Pictures ... In "Tell Me I Love You

" (2020), starring Kaniehtiio Horn, Sam Clark, Renee Morrison, Al Sapienza, and Ashley Angel Parker, best friends, music graduates and bandmates Ally, Ben and Melanie are living together in Malibu. With fame at their fingertips and a desperate need for cash to finish their album, the trio devise an outrageous plan to get married and inherit a large sum of money, all the while attempting to keep it a secret from their nosey extended family. Romantic comedy with original music and LGBTQ themes. From Vision Films.

" (2019 -- Japan): "Sound! Euphonium" is a popular franchise, starting as a series of YA novels and adapted into a manga and an anime series that ran for two seasons. Picking up where the series left off, "Our Promise: A Brand New Day" is a new film for all fans of the Kitauji High School Concert Band. Kumiko is now in her second year at Kitauji High School, and with a new year comes new problems. As if making it to Nationals wasnât hard enough, Kumiko is tasked with mentoring the concert bandâs troublesome first years â each with their own distinct personality and problems to solve. With Kumiko busy juggling both the concert band and her new role as senpai, how does her relationship with Shuichi fit into the picture? In a Blu-ray/DVD Combo, from Eleven Arts and Shout! Factory.

"Blood, Series 2" (2020) is a two-disc set with six episodes. Adrian Dunbar (Superintendent Ted Hastings in UKâs 2019 #1 cop drama "Line of Duty") stars as Jim Hogan, a once respected, tormented ex-doctor in a small Irish town, with three adult children. In Series 1, his wife died, and everyone believed it was an accident, except his daughter, who grows suspicious of her father. In Series 2, Hogan returns home a year later, stripped of his medical 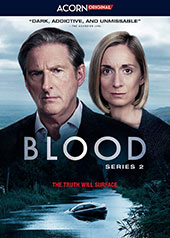 license and determined to make amends to reconnect with his family. He finds that his eldest daughter Fiona Crowley is ailing, slowly succumbing to the same debilitating illness that afflicted her mother. Jimâs determined efforts to make amends and help his ailing family only seem to add to their grief, and things worsen when he stumbles upon suspicious activity at the farm where his son-in law Paul works. When Fionaâs car veers off the road and crashes into a canal, a disturbing discovery is found. As the police start investigating, shocking secrets emerge that deepen the rift within the family and derail Jimâs chance at a fresh start. On DVD, Blu-ray, from Acorn Media ... "Creepshow Season 1" (2019), starring Tobin Bell, Adrienne Barbeau, Giancarlo Esposito, Cailey Fleming, Jeffrey Combs, Scott 'Kid Cudi' Mescudi, DJ 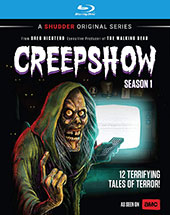 Qualls, Bruce Davison, David Arquette, Dana Gould and Tricia Helfer, is a new anthology series based on the 1982 horror comedy classic: A comic book comes to life in a series of 12 vignettes over six episodes, exploring terrors from murder to the supernatural and unexplainable, with haunted dollhouses, werewolves, murderous goblins, villainous trick-or-treaters, the dead, and medical marvels. On DVD, Blu-ray, from Shudder/RLJE Films ... "Harley Quinn: The Complete First Season" (2019-20) is a two-disc set with all 13 episodes of the adult animated action-comedy series. Harley Quinn has finally broken things off once and for all with the Joker and attempts to make it on her own as the criminal Queenpin of Gotham City. With the help of Poison Ivy and a ragtag crew of DC castoffs, Harley tries to earn a seat at the biggest table in villainy -- the Legion of the Doom. Sheâs got her eyes on the prize and nothing can stop her, except maybe Batman and Commissioner Gordon or her jealous, deranged ex. But donât worry -- sheâs got this. Or does she? From Warner.