" (1990) Where does voguing come from, and what, exactly, is throwing shade? This landmark documentary provides a vibrant snapshot of the 1980s through the eyes of New York City's African American and Latinx Harlem drag-ball scene. Made over seven years, "Paris Is Burning" 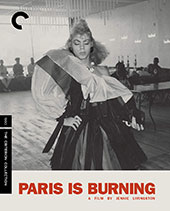 offers an intimate portrait of rival fashion "houses," from fierce contests for trophies to house mothers offering sustenance in a world rampant with homophobia, transphobia, racism, AIDS, and poverty. Featuring legendary voguers, drag queens, and trans women-including Willi Ninja, Pepper LaBeija, Dorian Corey, and Venus Xtravaganza-Paris Is Burning brings it, celebrating the joy of movement, the force of eloquence, and the draw of community. "Paris Is Burning" was restored by the UCLA Film & Television Archive in conjunction with Sundance Institute and Outfest UCLA Legacy Project. Preservation was funded by Sundance Institute, Outfest, and the Andrew J. Kuehn Jr. Foundation. On DVD, Blu-ray Disc with new 2K digital restoration, supervised by director Jennie Livingston, with uncompressed monaural soundtrack on the Blu-ray, from The Criterion Collection ... From RenÃ© ClÃ©ment, the acclaimed director of "Forbidden Games," "Purple Noon" and "Joy House," comes the top-notch thriller "The Deadly Trap

(aka La Maison Sous Les Arbres)" (1971 -- France), starring Faye Dunaway, Frank Langella, Barbara Parkins and Maurice Ronet. Jill and Philip (Dunaway and Langella) are an American couple who live in Paris with their two children. Their world is torn apart when the children go missing and may have been kidnapped. In a frantic struggle to recover them alive and well, the couple's lives begin to fall apart at the seams, as Jill's mental state deteriorates and Philip struggles to make sense of what is happening to them. Based on the bestselling novel "The Children Are Gone" by Arthur Cavanaugh. On DVD, Blu-ray, from KL Studio Classics ... 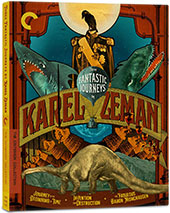 A one-of-a-kind silver-screen illusionist, Czechoslovak filmmaker Karel Zeman devoted his career to transporting viewers to realms beyond their wildest imagining. The deft, breathtaking combinations of live-action and animation techniques that he pioneered in the postwar years earned him comparisons to legends such as Georges MÃ©liÃ¨s, and an array of followers that includes Jan Å vankmajer, Terry Gilliam, and Wes Anderson. Presented here are three of Zeman's most enchanting fantasies, "Three Fantastic Journeys by Karel Zeman

" -- a boys' adventure into the mists of prehistory, a Jules Verne-derived flight of fancy, and an exotic eighteenth-century tall tale -- all of them treasure chests of wondrous sights, tactile textures, and headlong yarn-spinning that helped put Czechoslovak cinema on the international map. On DVD, Blu-ray, from The Criterion Collection ... From Henri-Georges Clouzot, the legendary director of "The Wages of Fear" and "Diabolique," comes the classic film noir, "Quai des OrfÃ¨vres

(aka Jenny Lamour)" (1947 -- France), co-written by Clouzot and Jean Ferry ("L'Enfer," "Manon"). Come see the fabulous Jenny Lamour, the singer with stars in her eyes! Ignoring the protest of her covetous husband Maurice (Bernard Blier), Jenny (Suzy Delair) pursues a meeting with a lecherous movie financier. When Maurice attempts to crash the rendezvous, it's murder! Enter Inspector Antoine (Louis Jouvet), whose seasoned instincts lead him down a circuitous path of alibis and deceit. Set within the vibrant dance halls and historic crime corridors of 1940s Paris, "Quai des OrfÃ¨vres" was beautifully shot in stunning black-and-white by Armand Thirard ("... And God Created Woman," "La VÃ©ritÃ©"). 4K Restoration. On DVD, Blu-ray, from KL Studio Classics.

In "The Beast and the Magic Sword

" (1983 -- Spain), starring Paul Naschy, Shigeru Amachi, Beatriz Escudero, Junko Asahina, Violeta Cela and Yoko Fuji. Lycanthrope Waldemar Daninsky goes from his native Europe to Japan in the 16th Century, seeking a way to cure himself of being a werewolf. Only a Japanese sorcerer named Kian and a magic silver sword can save him. Co-starring Japanese stage and screen veteran Shigeru Amachi, and shot in the studios of Toshiro Mifune, the film is a highly successful and colorful melding of European werewolf legends and dark Japanese fantasy. It features a fight between a werewolf and a tiger, an evil scarlet-cloaked witch who imprisons Daninsky, a sword fight with a troupe of ghost samurai, and many other unforgettable scenes. This is the first Blu-ray release of this film and its first-ever US release and includes both a full-frame version and a widescreen version. 4k digitally restored transfer from a film negative. From Mondo Macabro ... 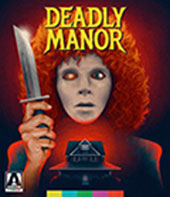 " (1990 -- Italy), the final horror movie from one of the genre's most unheralded filmmakers. While en route to a lake, a group of youngsters make an unscheduled stop-off at a remote, seemingly abandoned mansion where they plan to spend the night. But the property is full of foreboding signs - a blood-stained car wreck in the garden, coffins in the basement, scalps in the closet, and photographs of a beautiful but mysterious woman adorning every corner of the house. Before daybreak, the group will unwittingly uncover the strange and terrifying truth that lurks behind the walls of this dreadful place. The last in a trio of transcontinental slice-and-dice co-productions helmed by Larraz towards the end of the 80s (all of which he directed under the anglicized moniker of Joseph Braunstein), "Deadly Manor" - released on VHS in the US under the title "Savage Lust" - is a fitting capper to the director's prolific career in fear, now finally unearthed for the first time on Blu-ray. New 2K restoration from original film elements. From Arrow Video/MVD Entertainment ... After a meteorite lands in the front yard of their farm, Nathan Gardner (Cage) and his family find themselves battling a mutant extraterrestrial organism as it infects their minds and bodies, transforming their quiet rural life into a technicolor nightmare in "Color out of Space

" (2019), starring Nicolas Cage, Joely Richardson, Madeleine Arthur, Brendan Meyer, Julian Hilliard, Elliot Knight and Q'orianka Kilch. Based on the H.P. Lovecraft short story. On DVD, Blu-ray, from RLJE Films ... Before he became NYCâs favorite 80s action auteur with hits like "The Exterminator," "The Protector," and "Shakedown," as well as executive producer of grindhouse classics that included "Maniac Cop," "Frankenhooker" and "Basket Case 2 and 3", writer-director James Glickenhaus made his feature debut with "The Astrologer

" (1977), a bizarre tale of government skullduggery, satanic killings, zodiacal mayhem, and messianic horror. Playboy centerfold Monica Tidwell stars in the ultra-obscure thriller. Also known as "Suicide Cult" and a one-time U.K. Section 3 "Video Nasty," the film is based on the novel by John Cameron. In a 4k scan from the directorâs personal answer print. On DVD, Blu-ray, from Severin Films ... 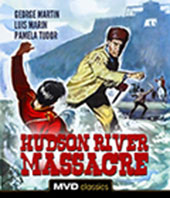 " (1965 -- Italy) is set in Canada in the 19th century. The Hudson Bay Company, with James Sullivan (Santiago Rivero) at the helm and supported by the British Mounted Police, impose unacceptable conditions on native trappers. A group led by Leo Limoux (Franco Fantasia), rebel in retaliation. Victor DeFrois (George Martin), a trapper who, until the execution of his brother by the British soldiers had remained neutral, kidnaps Ann Sullivan (Giulia Rubini), daughter of the ruthless owner of the Hudson Bay Company, to use as a bartering tool while the rebels seek to disrupt and gain control of the company's business. What Victor didn't count on was falling in love with his hostage, in this classic spaghetti western written and directed by Amando de Ossorio ("Tombs of the Blind Dead"). From MVD Classics ... Sometimes dead is better. But the shocking terror that plagued Ludlow, Maine, in "Pet Sematary" is still very much alive in "Pet Sematary Two

Collectorâs Edition" (1992), starring Edward Furlong, Anthony Edwards, Clancy Brown, Jared Rushton, the sequel to the 1989 hit film. After the death of his wife, veterinarian Chase Matthews and his 13-year-old son, Jeff, move to Ludlow to rebuild their lives. Antagonized by the neighborhood kids, Jeff befriends another outsider, Drew Gilbert, who lives in fear of his cruel stepfather, Gus. After Gus cold-bloodedly shoots Drew's beloved dog, the boys bury the body in the local Indian burial grounds â a place rumored to have the powers of resurrection. But when evil is awakened, the boys realize that sometimes you should just let dead dogs lie. New 4K scan of the original camera negative approved by director Mary Lambert. On Blu-ray. Extras: New audio commentary with director from Scream Factory.

" (2019 -- China), starring Wu Jing, Zhang Ziyi and Jackie Chan, is a cinematic retelling of the first Chinese climbers to summit Mount Everest - the first ever to do so from the North Ridge. Well-known as the most challenging side of the mountain, the perilous journey takes its toll on the mountaineers, physically and mentally, forcing them to make life or death decisions at every turn. On Blu-ray from Well Go USA.

In "Norm of North: Family Vacation

" (2020), with the voices of Lisa Durupt, Jonathan Holmes, Brian Drummond, Lee Tockar, Paul Dobson, Cole Howard, Andrew Toth and Jennifer Cameron, Overwhelmed by his Kingly duties, Norm struggles to make time for both his kingdom and his family. But when his crown is mysteriously stolen in the dead of the night. Norm must embark on an epic journey -- disguised as a family vacation. Norm sets out to track down the thief and find his crown -- and learns the valuable lesson that by working together as a family, nothing is impossible. From Lionsgate.