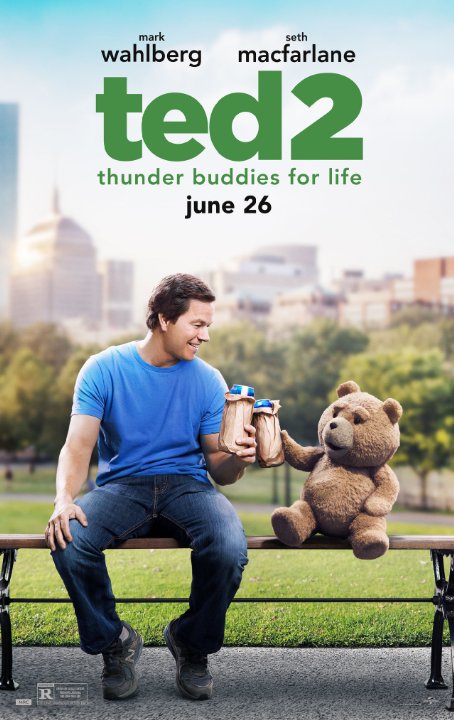 If you liked the original Ted, chances are you will also enjoy Ted 2. It's more of the same - if you know about the type of humor Seth MacFarlane uses, it's pretty much on par with his other films. Granted, I think he took an easy path - most of the humor is either A) about pot B) recycled from Family Guy or C) bagging on race/gay issues. I found it fell a bit flat at times, but was made up for by some killer cameos and an absolutely terrific showdown set at Comic Con.

Ted 2 finds Ted (voiced by MacFarlane) marrying the "love of his life" Tami Lynn (Jessica Barth) while his Thunder Buddy for life, John (Mark Wahlberg) is trying to get over his divorce (sadly Mila Kunis didn't come back for the sequel). But the marriage soon sours, as bills pile up and things get heated. But what can save this marriage? A baby, of course! Since Ted isn't equipped for this kind of thing, he turns at first to donation (that doesn't work out) and then to adoption. But this little matter soon throws up a red flag with the government, and though he has skated by for awhile, Ted is suddenly declared property rather than treated as a human. His bank account frozen, job lost and marriage annulled - Ted sets off on a quest to prove his is a human - in court. Not being able to afford the best in town, they settle for a brand new junior partner, Samantha (Amanda Seyfried) who is a major pothead with no knowledge of pop culture. But as she helps, Donny (Giovanni Ribisi), now a janitor as Hasbro, has plans to kidnap Ted once he loses the case and find out his secret.

The film really does well on its cameos - from Tom Brady to Liam Neeson to David Hasslehoff to Jay Leno to Morgan Freeman - it has a stellar lineup of top talent. Patrick Warburton and Michael Dorn are especially hilarious as Guy and Rick, legally married now - who show no mercy at Comic Con (donning The Tick and Worf costumes - characters they have actually played in real life). Some people have only a short time on screen, others have larger roles, but all these parts result in some perfect gags (also, make sure to stay after the credits for a certain resolution that can't be missed).

But these moments are a bit too few and far between. The main characters have plenty of jokes, sure, but they always seem to come off as too crass, boring or dumb - much of the same problem I had with the original Ted is still present here. While many people loved the original, I felt it a bit lacking. This is neither better or worse - just much of the same. But I am also not the greatest fan of MacFarlane, either, so his humor may just not appeal to me as much. Plus, for a film about civil rights, it sure does throw out a lot of biased jokes.

In the end, it comes down to how much you enjoyed Ted and how much you can stand MacFarlan's brand of comedy. For the cameos alone, I think this film is definitely worth watching but it made me cringe just about as much as it made me grin.