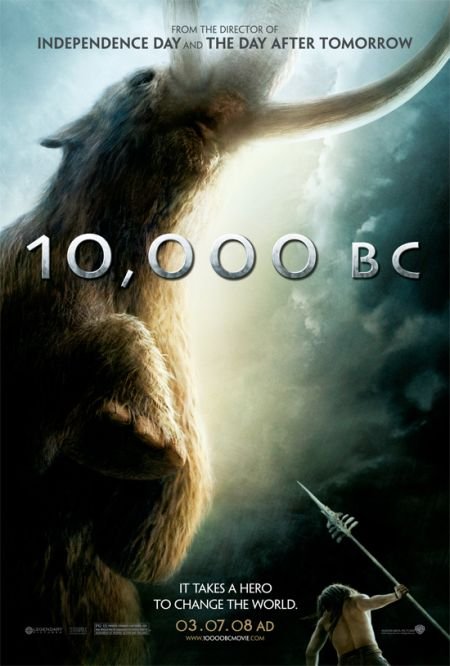 "10,000 B.C." is a laughably bad and ridiculous epic adventure movie that fails on almost every level. The story is stupid and unoriginal, while the characters are ones you rather see die than live. The terribly wooden acting, filled with most no name actors doesnt help things any. All of the blame must go on director Roland Emmerich, who is now obessed with visuals over a rich and rewarding story. He is like Michael Bay, but not as talented. They are some entertaining sequences but they are only a few and they are so short. The worst thing about a bad movie is when it bores, and this one becomes boring fast. "10,000 B.C" has to be one of the most historically inaccurate movies ever because theres things that like wooly mammoths that help in the building of pyramids and cavemen that are made up of every ethnicity! I didnt know cavemen looked like surfers. Ive seen more accurate deplictions of cavemen in those Geico commericals. Roland Emmerich films have had very impressive f/x but i feel some of the them here are a let down, like the sabertooth tiger. The best part of this film is the f/x of the wooly mammoth, which is breathtaking."10,000 B.C." almost manages to be one of those so bad its good movie but the sum of its parts makes this one of the worst movies of 2008 and one of the worst ive seen in a movie theater.


P.S.- I recommend seeing a better and much more unique film about cavemen called, "Quest for Fire"