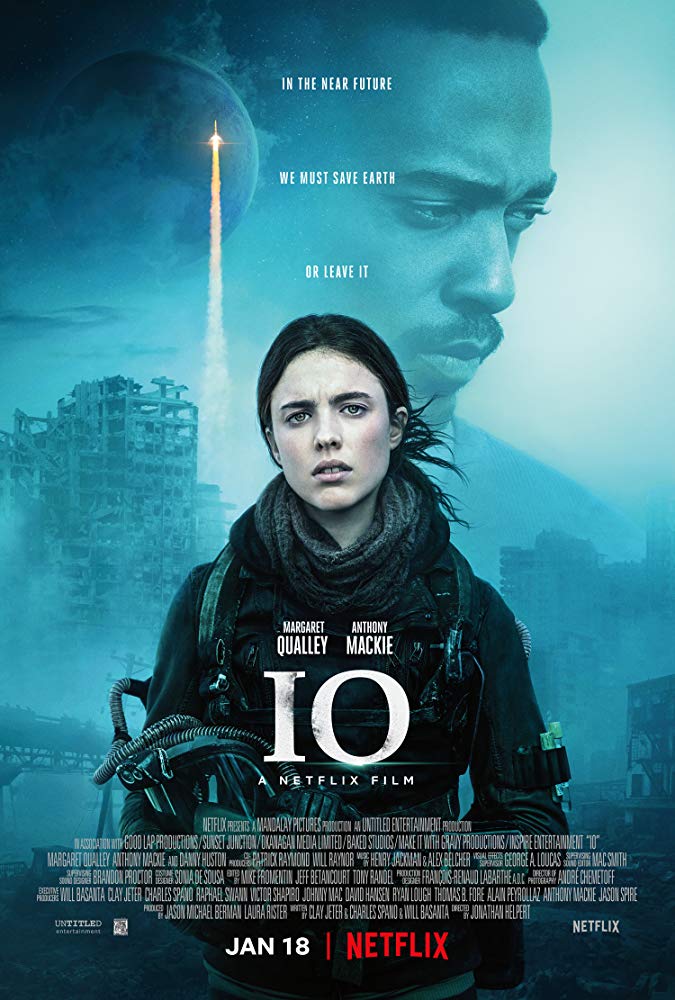 Sam, we have to leave this place.
Sooner or later youâll have to.

âIOâ will certainly be an orgasmic experience for global environmentalists and defeatists. Supporters of global protest movements about global warming and the destruction of our balanced eco-system will certainly use this film as an example to reinforce their apocalyptic disaster scenarios. Can you already imagine it? Such a television program where they put a microphone under the nose of such an environmental adept? You can bet that comments such as âYou see. Any idea what misery weâll get into if we donât intervene now?â will be flung at the interviewer. In my humble opinion, all this is a storm in a glass of water (And no, global warming didnât cause that storm). I blame it on the natural evolution that our planet is undergoing. An evolution in cycles in which we as humans only speed up the process because of our polluting behavior. Soit. I should stick to just one particular thing Iâm good at. And thatâs to write down a review of the movie in question. Short and concise: the film is as boring as any environmental debate of today.

For those who didnât know yet, âIOâ shows us for the umpteenth time a deserted, uninhabitable planet Earth. This concept has been used to a great extent in multiple films with a different cause each time. Either itâs because of a zombie outbreak like in âWorld War Zâ and similar zombie movies. Or itâs prehistoric creatures like in âThe Silenceâ that cause a global slaughter. And letâs not forget aliens? They appear all the time to plunder our blue planet because they themselves are without resources. Viruses, impulses via mobile telephones, an innocent text message, a computer virus or simply a world war. An enormous number of causes have already been used to create chaos with an extinct planet as a result.

Here in âIOâ, itâs toxic fumes that cause the population to die en masse. Choking and blood transforming into a black liquid. Scientists claim the reason is an unexpected change in atmospheric composition. Smart people with common sense realize that itâs only Mother Earth who is thoroughly sick and tired of us and tries to get us off this planet with a well-aimed ecological kick in the butt. The result is a massive exodus to IO, a planet floating around somewhere near Jupiter. But that doesnât apply to teenage girl Sam (Margaret Qualley) who stayed behind on Mother Earth, living in a house somewhere on a mountain where the toxic fumes canât reach. When she looks over the valley, this smothering smog hangs like fog in the valley. Even a storm cannot blow these toxic fumes over the ridge. What the storm surely did, was blowing away a bee colony, necessary for the scientific research Sam and her father, who initiated this research and apparently didnât survive the disaster, were doing. Or he went up in smoke. I cannot judge what this scientific research actually meant or if it made sense. Thatâs probably due to my limited intelligence.

All in all, the beginning of the film wasnât bad. Sam wearing an oxygen mask, traveling through the deserted streets of some American city with the help of a quad (equipped with a trailer). Images of a dead city and horribly dark underground corridors where rainwater drips from the ceiling. And the realization that her visiting time is limited to the content of the oxygen bottles. A miscalculation and she falls prey to the toxic fumes. Exciting. Captivating. But at the same time, itâs not groundbreaking. Even when Micah (Anthony âFalconâ Mackie) arrives in a Jules Verne-like balloon, it doesnât get much more fascinating. What follows is a conflict between these two main characters. Sam wants to continue her fatherâs lifeâs work and prove that life on Earth could be possible in the future. Micah wants to board the last spaceship that leaves for IO but needs some extra help. When the romantic get-together comes into play, I immediately thought of âZ for Zachariahâ. A similar film that starts interesting but is characterized by a general dullness and slowness.

The two main characters werenât the problem. Margaret Qualley is a good-looking appearance and shows in a solid way how determined the character Sam is. Only the decisions she made were a bit implausible. Anthony Mackie manages to play the unsympathetic balloonist with a self-control problem effortlessly. The script was too nihilistic for me. The pace was irritatingly low. And the story itself was extremely boring. Many technically perfect still lifes. Lots of musing and breaks full of drama. Even the hopeful ending with a mythological-religious message couldnât raise the level. Well, âIOâ was a bit of a disappointment for me. I didnât expect a âLucas Artsâ kind of movie where everything âexplodes and blasts and bleepsâ. But in terms of dullness, this Netflix Original still beats many competitors.

You can watch âIOâ on Netflix now!