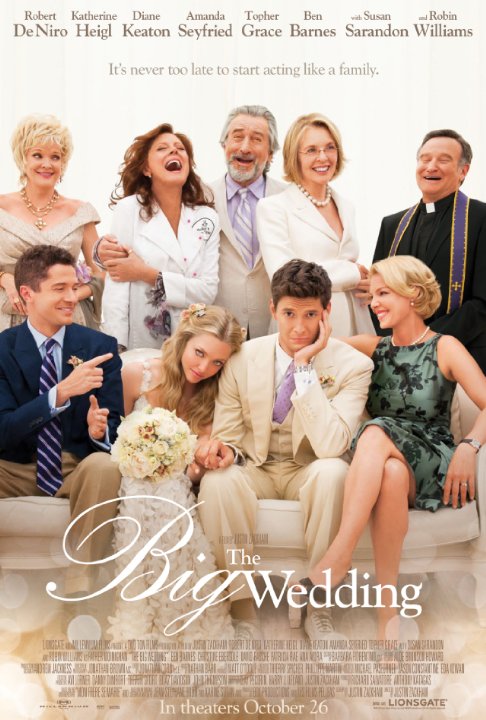 Occasionally I have to give in and look at a "romcom" over the weekend. My wife is happy because she can see another chick flick. And I'm happy because my braincells get a rest once again while watching a movie. You really don't need them while watchting "The Big Wedding". The only reason why I wanted to watch this movie was the fact that there were quite a few big stars participating in it. Robert De Niro, Diane Keaton, Susan Sarandon, Robin Williams and Topher Grace. But a sublime cast can't always save a movie. That's cristal clear.

I have to admit, it's not a movie that completely sucks and it meets all the necessary requirements as the movie is about organizing and completing a wedding. It's one out of a dozen and can be added to the list of previous wedding movies such as "Father of the Bride", "My Big Greek Wedding", "Honeymoon in Vegas" and "Wedding Crashers". The latter is on a different level, but the typical cliche jokes are also in it. It looks as if Diana Keaton has a weak spot for such kind of movies. Again she shows up as a mother of one of the wedding couple. This time she's the mum of the groom.

Something inevitably always must be present in these movies ... A nearby pond. This is absolutely needed so that there's invariably a splashing water scene in the movie. Fetishists are waiting for this to appear so the tears of laughter roll down their cheeks. In "The Big Wedding" it was used twice. First time when the beautiful naked body of Ana Ayora disappears in it (The drooling part) and the second time as Robin Williams tumbles in it (The less drooling part). The latter has however retained greatly in terms of exaggerated acting and seems to have had a dose of sedatives so that he doesn't start trotting around in a hyper-kinetic way. Anyway, I thought for a moment that I had already seen this movie, but I confused this movie with "License to wed" in which he also played the role of a priest. Personally I thought the confession scene was extremely funny and hilarious. I even had to laugh briefly.

I thought the rest of the cast played on autopilot. Robert De Niro showed up again in his bathrobe and seemed to come straight out of "Meet the Fockers". Keaton looked like an old tart who realizes that her days of extreme sexual appetite are over, but still gets pleasantly surprised during the course of the story and discovers that those cobwebs suddenly disappeared. The dialogues between both were sometimes funny and entertaining. Susan Sarandon plays as always an old spinster. Katherine Heigl was there for the dramatic part. The most imaginative and funny role was played by Topher Grace as the not so bad looking doctor who's already 29 and never shagged anybody. The whole movie he's chasing the South-American Nuria like a turned on, horny little guy.

The inevitable misunderstandings follow each other in rapid succession. The divorced Don and Ellie need to fake that they are still married, with some uncomfortable situations as a result. The new girlfriend is pushed aside a bit what pisses her off and she takes revenge by unexpectedly appearing everywhere. The daughter is trying to get pregnant for years already and now has an allergic reaction to anything that has to do with babies. Eventually she turns out to be pregnant just as she broke up with the future father. Sigh ... The South-American girl first wants to start something exciting with the 29 year old son who is, as mentioned earlier, still a virgin. But after a friendly chat with the mother she doesn't want that anymore. As a result the son walks around like a frustrated teenager with his pants too tight. The handjob by the South American during dinner reminded me immediately of "Wedding Crashers". As icing on the cake it turns out that there are more persons who had an affair. Some even like to do it with someone of the same sex . Don't worry, no one will be offended , and life goes on as usual. Felt strange to me anyway.

Well, it was a fun movie just for passing time on a Sunday, and the benefit of such movies is that the playtime isn't that long. Afterwards you feel relaxed and you're happy you didn't end up in such a crazy family.