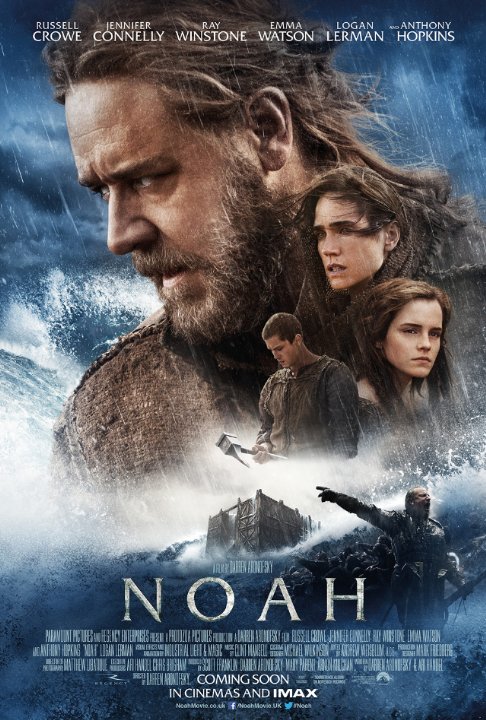 I really wonder what's so terribly bad about the movie "Noah". Granted, it smells a bit like commercializing the book of all books (And I think this still is the most ingenious elaborated marketing plan ever devised in human history. This marketing plan made sure a book was written that will dominate the list of bestsellers in perpetuity. Probably until the end of the world ...) in compliance with all film adaptations of other literature (some great, some bad). After "The Lord of the Rings", "Harry Potter", "The Hunger Games", "Divergent" and other similar books susceptible to commercialization, it seems like Hollywood has found a Biblical gap in the market. End of this year Christian Bale will be wandering through the bone-dry desert like Moses (also with a trimmed beard) in "Exodus: Gods and Kings". Darren Aronofsky's religious story "Noah" is of a moister content, with Russell Crowe hammering together a huge boat, so he can defy the salt water (God sprinkled the earth's surface liberally) together with his offspring and all species living on earth, except for the water creatures, because they feel comfortable in this huge bathtub. But isn't it so that it should be freshwater instead of saltwater with all that rain ? And aren't there two types of aquatic animals ? Those who survive in saltwater and the others ? How was this crucial problem tackled ?

Anyway, despite the practical issues, this was a highly entertaining spectacle with an abundance of special effects and water (They used about 83,000 liters water in this film. A quantity that would make the average Ethiopian farmer really jealous ... ). You could expect the Christian community not being happy about the making of this film. Isn't it sacrilegious to turn this pious story into a mega spectacle and create it like contemporary fantasy films? (Sarcastic tone) I suggest they redesign the interior and decoration of churches, so that it would be a reflection of this rather epic-looking film. There's a high probability that one could reach a new fan base and the population of the group of churchgoers could grow again. I have no idea if this version of "Noah" follows the original story faithfully. The only thing I knew about it, was that an ark full of animals,which drifted on an immense ocean, played a major role. I don't know if the family troubles as presented here, correspond to the biblical story. It would be just a simple,short film if Aronofsky remained faithfull to the biblical version, because that story about the adventures of Noah is not that big of a deal.

And that's probably the Christian audience's key problem. The whole story is firmly filled up with profound special effects and great battles. A bold yet extremely successful choice was the introduction of "The Watchers". A collection of fallen angels who mutated into rocky beings. The comparison with "The Lord of the Rings" is made quickly . In particular, the movement of The Watchers is very similar to the way "The Ents" moved. Difficult and slow but at the same time, they can strike in a devastating way. The moment these "moving masses of rock" start to protect the Noah family against the onrushing crowd, with a fair part of the crowd being violently crushed and spinning through the air after a massive draw with their blocky fists, you could easily compare it with the attack on Minas Tirith (not the same size but with the same amount of adrenaline). Also the Ark is visually excellent developed. An apparently gigantic freighter with an entire zoo on board. Beautiful images and realistic created animals. Even the devastating flood was successful shown and was less fake as the one in "Evan Almighty".

Maybe it was the acting? Honestly I can't say anything wrong about that either. Ok, Russell Crowe doesn't really look like a devout man and the way he declares biblical phrases, seemed like a market vendor who tries to sell fake products convincingly. And yet he did it properly and the matter of conscience he was struggling with in the end, was sublimely interpreted. Only the emerging fanaticism started to bother me. But ultimately this is a tedious facet that's part of a religion. Although Jennifer Connelly, Naameh the wife of Noah, was limited seen in the picture and didn't play such a big part in the whole set-up, she was still the driving force that propelled Noah in the right direction. Anthony Hopkins, the helpful grandfather Methuselah who yearns for berries impressed me. And Ray Winstone as the warlike king Tubal-Cain, represented evil. The rest of the cast was necessary, but not particularly memorable.

"Noah" turned out to be an average disaster movie with a serious family conflict which could eventually become a family drama. Maybe it wasn't quite literally as written in the Bible, but in the end it was not sacrilege. And there is certainly no profanity. Maybe Christian representatives could be a little less narrow-minded and give this interpretation some credit. Eventually the sequence Aronofsky used for the creation of the Earth is also just a guess. No living soul can conclusively prove that this is the ultimate truth. Indeed, it's not a film where a funny giraffe and roguish elephant cosily sit alongside each other and look over the railing to the rising water. It's rather a gloomy and depressing picture about humanity who lives in sin being swept of the earth by "The Creator", because he's sick and tired of it, so He can start over with a clean slate. But with whom? That's another theological riddle, I suppose.

Finally, some elements that seemed disturbing and a bit implausible. That the Ark was immense, I can imagine. But that it's of such a size that a stowaway hasn't been discovered after a year, seems a bit exaggerated. Knowing that the stowaway isn't vegetarian, wouldn't that be detrimental to the resting flock ? The pregnancy test made me frown. And the final denouement is entirely hallucinatory. Eventually Noah didn't need to worry about anything in the end, because the offspring was the solution on their own. And otherwise I need to think twice next time, before I use the word "inbred".

All in all, it's an enjoyable film (despite me not being that religious) with a few little miss, but still a stunning visual presentation with beautiful, serene interpretations. For those who started tearing their hair and protesting against it (even before there was any finished material): isn't it written in the Bible "For if you forgive other people when they sin against you, your heavenly Father will also forgive you. (Matthew 6:14) ? I suggest you forgive Aronofsky's artistic freedom and approach this interpretation with a more open mind. That would be nice example of "loving one's neighbour". Amen !